The Ocala National Forest is located in northern central Florida, and spans about 387,000 acres. This is the southernmost national forest in the continental United States, as well as the second largest and includes more than 600 lakes, rivers, and springs according to the United States Department of Agriculture. The forest is a popular tourist destination; from renting cabins, taking beautiful hikes through the forest, picnicking, swimming, fishing, canoeing, ATV riding, horseback riding, hunting, and shooting, to even just enjoying a nice day out at the one of many springs open to guests. Locations such as Juniper Springs, Salt Springs, Alexander Springs, and Silver Glen Springs, being credited as one of Florida’s oldest tourist destinations (Draper), are places to enjoy such swimming and recreation. There is something for everyone to enjoy. In fact, the Ocala National Forest was ranked #5 in a Reader’s Choice top 10 Parks for hiking (Ben). If hiking isn’t your thing, perhaps taking in all the beauty and splendor of the area is. There are many terrific spots to stop the car and snap a few beautiful pictures of tremendous trees, and perhaps you may be fortunate enough to stumble across one of the many creatures that inhabit the forest, such as deer and black bears. This forest contains the largest concentration of sand pine in the entire world (United), and make for some beautiful photographs. However, there is as much to learn about the forest as there is to enjoy in it 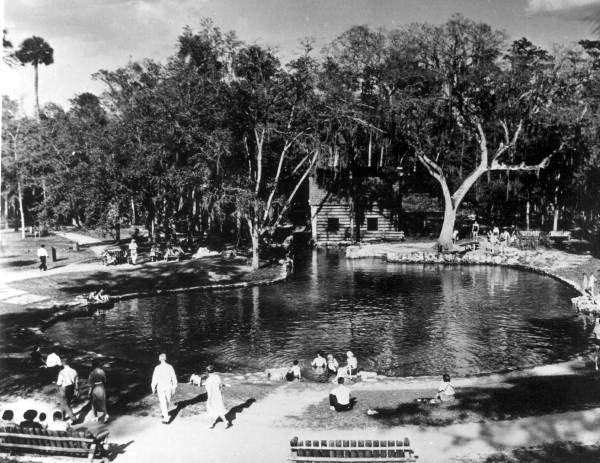 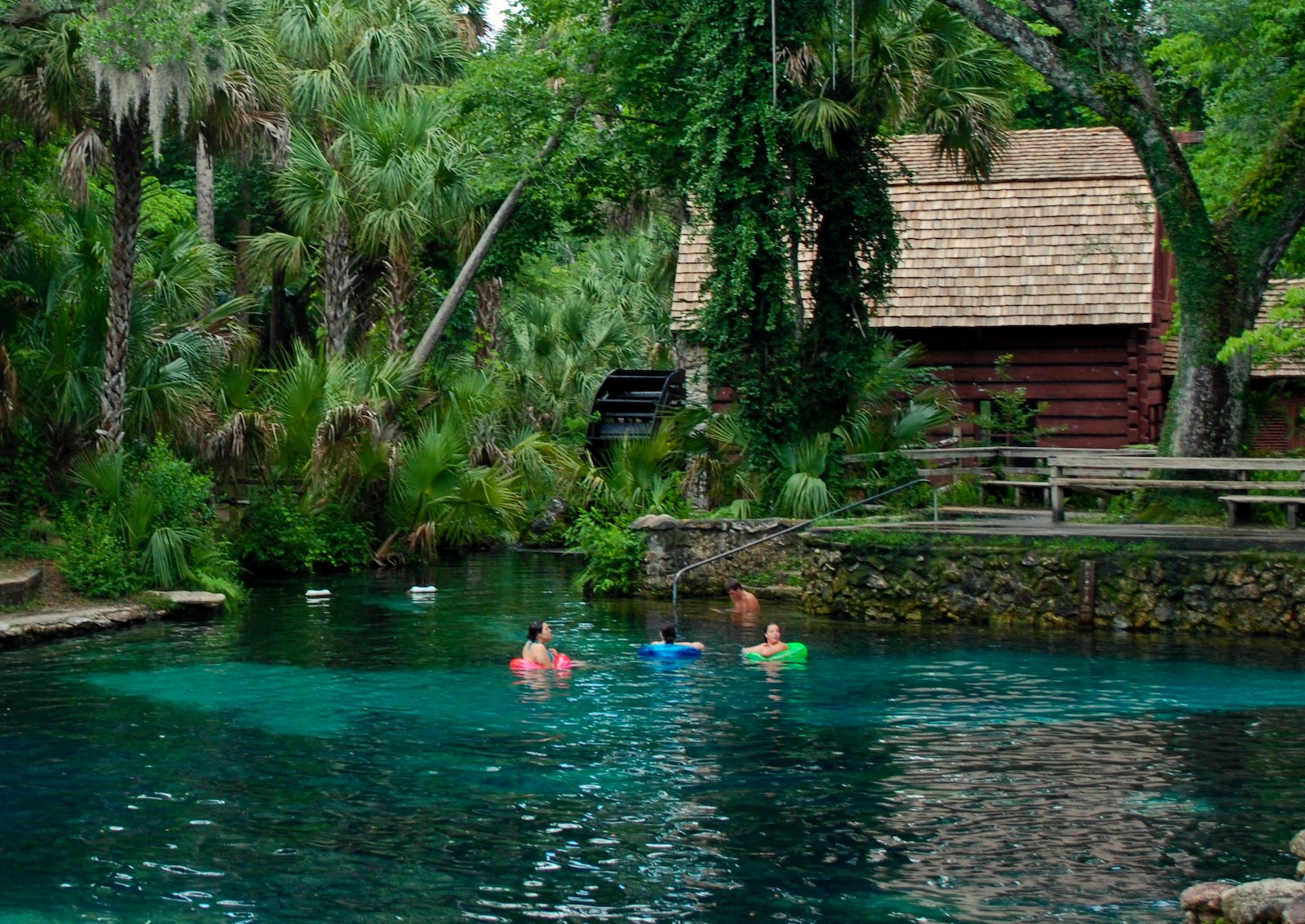 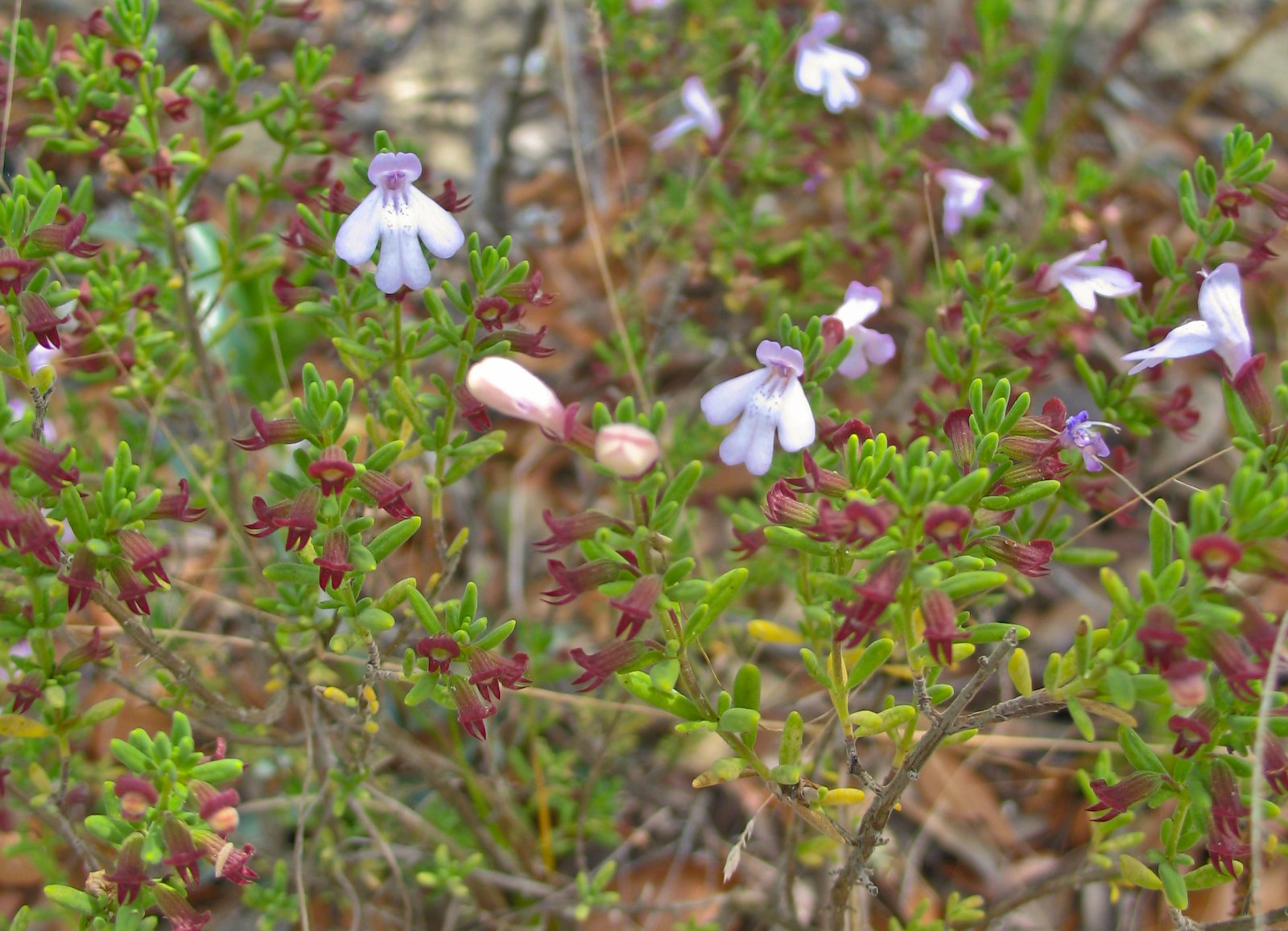 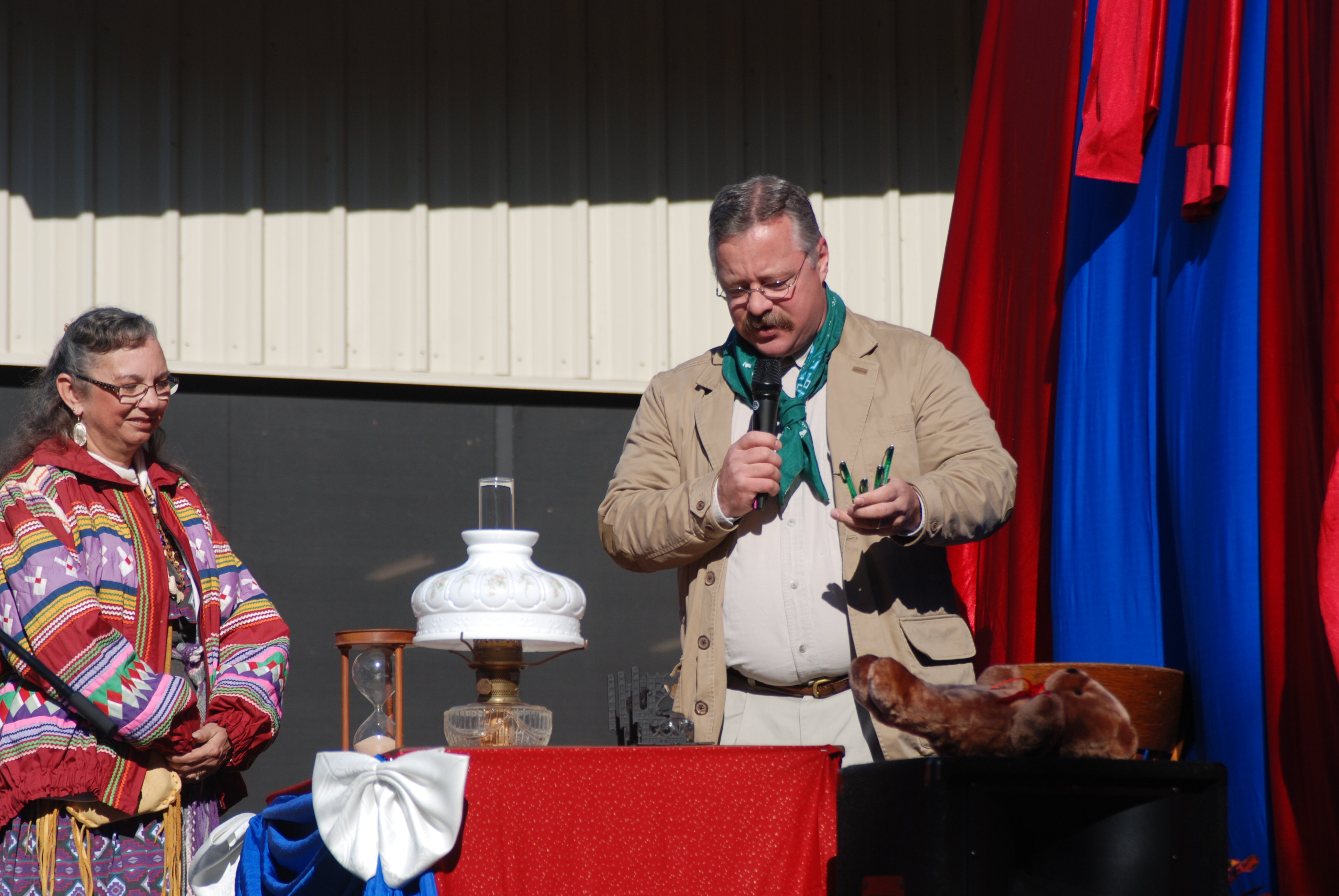 The Ocala National Forest lies between Daytona Beach on the east and Ocala on the west and is just north of Orlando. The St. John’s River and Lake George create its eastern boundary, the Ocklawaha River creates its western and northern boundary and State Highway 100 creates its southern boundary (United States 2). It is the most southern National Forest in Florida and obtained its name from the Seminole Indian Chief, “Ocali” who lived in the area at the time.

The Park was founded on the 24th of November 1908, and was the second national forest established east of the Mississippi river out of the 150 forests added during President Roosevelts administrations (United). Before it was a national forest however, it is believed that Silver Springs was inhabited by native Americans, who’s artifacts have been excavated from the sight. Silver Springs State park is also credited with being an early tourist destination in Florida with its origins dating to the 1820’s, when paddlewheel steamboats brought tourists to the area (Draper). However, Roosevelt would be remembered as the man who took Americas preservation into his own hands in a time when no one really cared about conservation. Roosevelt would later write in his autobiography “All that I strove for in the nation in connection with conservation was fore-shadowed by what I strove for New York State when I was governor” (Marvinney). The introduction of the Ocala national forest added acreage to the reserves, of which 15,000,00 acres of Timberland were added during Roosevelts Administration (Marvinney).

From the time that Ponce de Leon and Hernando DeSoto embarked on the shores of Florida, the natural tropical beauty from Florida’s coast expanded all the way across the peninsula and northward into the 22 million acres of dense forests that almost secluded Florida from its northern neighbors.  Almost 400 years later, in 1908, President Theodore Roosevelt in an effort to protect the sand pine forest from destruction from deforestation, and the fact that much of the land in Florida was public-domain, Florida became the first state in the southeast to have a national forest, The Ocala National Forest (History and Culture).  This was only one of three National Forests east of the Mississippi at the time and the only one in Florida.  This was the beginning of a coordinated plan to protect the timber, wildlife and community life that relied on this forest.

As the first National Forest in Florida, The Ocala National Forest is the oldest, followed by the Osceola National Forest (established in 1931), the Apalachicola National Forest (1932) and the Choctawhatchee.  The later became owned by the United States Armed Services in 1940 as now serves as Eglin Air Force base (History and Culture).  The crown jewel though remains The Ocala National Forest as it is the largest existing area of sand pines, also known as “scrub pines”, in the world.  The United States government established the U.S. Forest Service to protect and nurture this crown jewel and entrusts them to manage and protect its environmental and commercial interests. They continually assess and reevaluate the need for updating and developing fire breaks, watch towers, guard station, and roads to ensure that the forest continues to thrive.

Unfortunately, the late 1800’s and early 1900’s placed a heavy burden on the Ocala National Forest.  The main industry derived from the forest was used for “naval stores”, products derived from pine sap.  This gum sap had many uses, but the most important during the early 1900’s was its use to create turpentine which was essential in keeping wooden boats water-proof (Walker 1). The pine trees in The Ocala National Forest provided ¾ of the naval stores industry, 85% of the supply of gum and ½ of the world’s supply.  Not only was the process of “turpentining” vital to our Navy and merchant marine fleets of ships, it was a booming economic industry characterized by a physically punishing industry, where many of the laborers were slaves and worked in less than ideal work conditions (Walker 2).

After the naval stores were harvested from the trees, the yellow pines, hardwoods and cypress timber of the Ocala National Forest were cut down as their timber was high quality and yielded a premium price, therefore becoming an additional valuable commodity. The trees that were weakened and no longer protected from disease, added to the decrease of thriving scrub pines.  Furthermore, Since the Ocala Forest had a direct water flow, via the St. John River, to the supply mills in the coastal towns of Jacksonville and Fernandina, the Ocala National Forest was a direct provider of commerce (United States 28). With the booming railroad industry and the World Wars of the 1900’s the Ocala National Forest experienced increased destruction as it struggled to supply timber for the nation’s demand of timber.

Prior to the forests creation the community surrounding what would become the Ocala national forest relied on the timber and turpentine industries of the area (United). They relied on the market value of timber, when it was high the industries would come and take lumber to be put on the market. When the market value of timber eventually lowered the industries would abandon the small communities and leave them with a neutered economy and much deforestation, including the communities around the Ocala national forest, as well as many other communities of the southeast (United). This all goes back to the idea that in the late 1800’s and early 1900’s, people really did not think much about conservation and the protection of the United States resources. This belief was one of the many things Roosevelt sought to change, as he was an avid outdoorsman and sportsman. He wanted there to be a place for future generations to hunt, fish and hike. The Ocala National Forest perfectly imbodies this desire.

With increased productivity in the timber industry and industrial improvements, the Ocala National Forest suffered physically.  In 1911, a federal law, The Weeks Act, passed Congress which allowed the government to obtain private property to protect the rivers and watersheds, and in turn, the commercial interests of the U.S. Citizens (United States 9).  Approximately 1/3 of The Ocala National Forest was obtained through The Weeks Act of 1911 (Healy 2).  Today only about 1.5 million acres of the original 22 million acres of protected forest exist in Florida.  According to the U.S. Forestry division, the Ocala National Forest accounts for 387,000 of those acres. Additionally, in the 1930’s, the government established the Civilian Conservation Corp (CCC).  Their purpose was to work on many of the construction projects in the National Forests.  Their efforts lowered unemployment and created lasting structures in the Ocala National Forest, which include stone monuments, swimming areas, and wood cabins which all remain standing today and continue to provide enjoyment for visitors to the forest 365 days each year.

As previously mentioned, the U.S. Forest Service oversees the administration of Ocala National Forest. Their purpose is not only to provide jobs that benefit our National economy; they also oversee the outdoor recreational activities at the Ocala National Forest.  According to Healy, The Ocala National Forest contains four major springs that maintain an average temperature of 72 degrees year round. These crystal clear springs are ideal for swimming, canoeing, or simply floating on a raft in the gentle current created from the boil spewing fresh water from underground.  These springs include Silver Springs, Sweetwater Springs, Alexander Springs, Salt Springs, Silver Glen and the most popular for Juniper Springs, which remains on the National Historical Registry (Juniper Springs Millhouse).  It is at Juniper that the CCC constructed projects like the old-fashioned water mill and rock boulder swimming hole still remains structurally sound for visitors to enjoy.    Silver Springs also provides as a  backdrop for commercials, movies and television, the most famous being the filming of multiple episodes of Tarzan the Ape Man, at Silver Springs in the mid 1900’s.

The U.S. Forest Service also regulates the hunting and fishing activities that are available throughout the forest so that native wildlife such as black bear, white tail deer and the Florida panther can be enjoyed by residents and visitors for years to come.  Furthermore, there are activities within The Ocala National Forest which include off-road vehicles, picnic sites, horseback riding, snorkeling, hiking, canoeing, waterskiing, boating, scuba diving, and swimming nature viewing.  Fortunately, these activities allow visitors to view and enjoy The Ocala National Forest regardless of age, interest and preferred activity level.  The Ocala National Forest continues to receive millions of visitors each year (History and Culture).

The idea of Theodore Roosevelt playing such a vital role in the Forest’s history is something that is still being celebrated to this day. In 2008 there was a huge festival celebrating the 100th anniversary of the Forest, complete with cake and a reenactment of Theodore Roosevelt signing the Forest creation order. The centennial of the Forest birth marks 100+ years of education, exploration, preservation, and recreation. Had it not been for Theodore Roosevelt and his love for nature who knows what would have happened to this lush ecosystem that draws in tourist year-round. Perhaps the forest we know and love today would have been very different. In a time of industrial automation, the forest could have easily been consumed until there was nothing left, taking with it the many species of animal and plant life that inhabit its acres today. What is for sure is that there is something to be enjoyed and much to learn when visiting the beautiful Ocala National Forest. Make sure to bring plenty of bug repellent and sunscreen, and be prepared to take many wonderful photos while enjoying the beautiful Florida weather.

Walker, Mike. “Turpentine and the Naval Stores Industry of North Florida.” PorterBriggs.com, PorterBriggs.com The Voice of the South, 21 Mar. 2015, porterbriggs.com/turpentine-and-the-naval-stores-industry-of-north-florida/.