Sanford Memorial Stadium is a baseball stadium of the historic variety. It’s located just south of Lake Monroe, on Mellonville Avenue in Sanford Fl. Its location is just minutes from the historic district of Sanford. The stadium has hosted some of the best known and overall best players to ever play the game.

Pictures from the current incarnation of Sanford Memorial Stadium.

Scoreboard from the old stadium during the 1950s 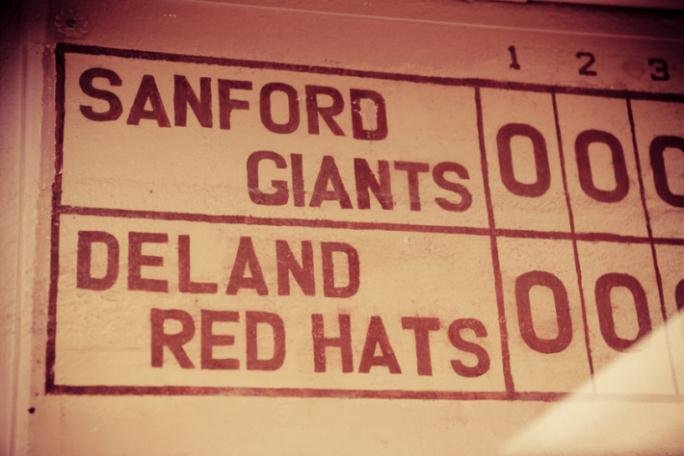 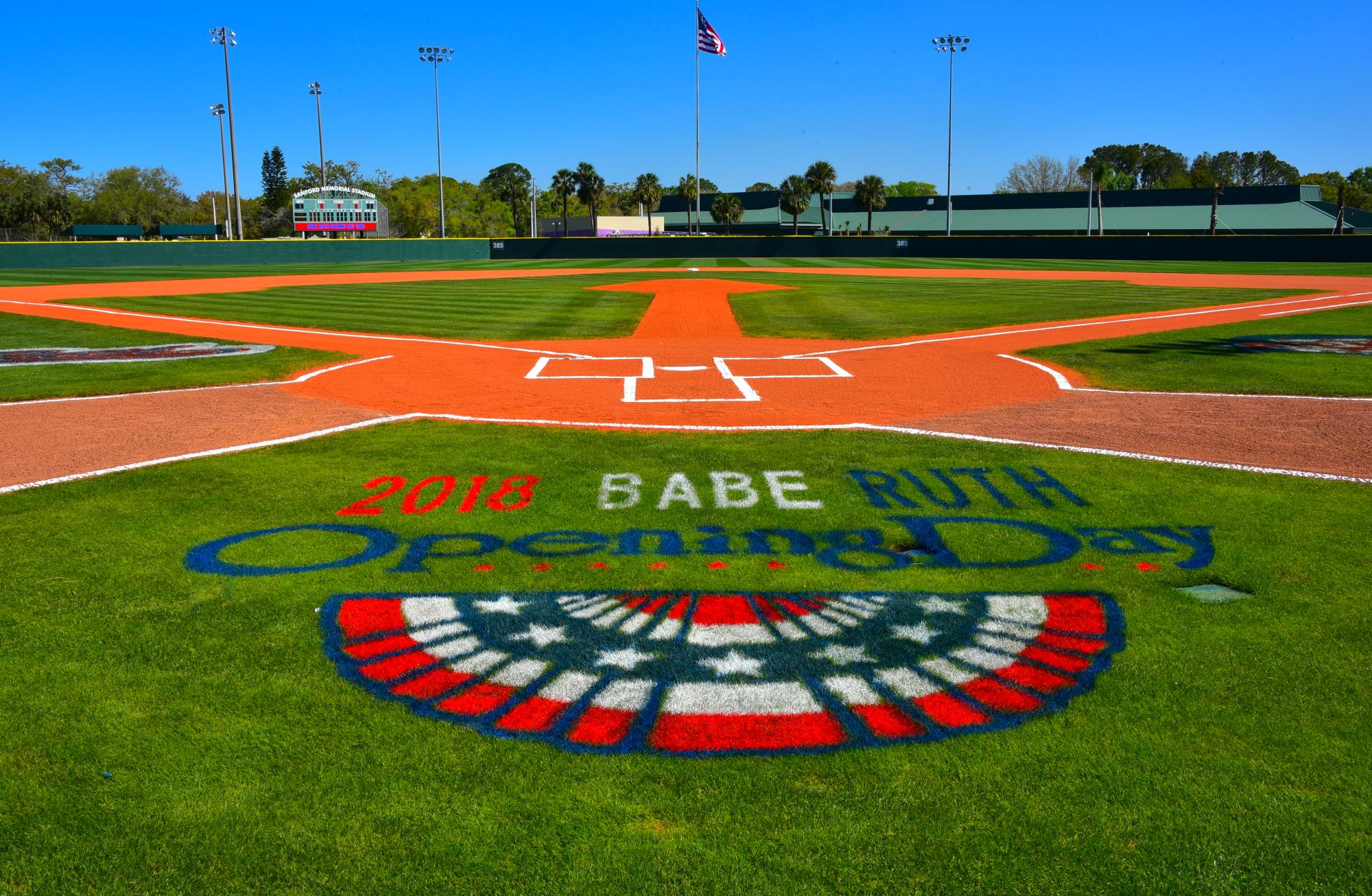 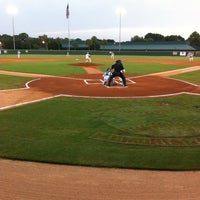 A Memorial Plate for the Men and Women of Seminole County 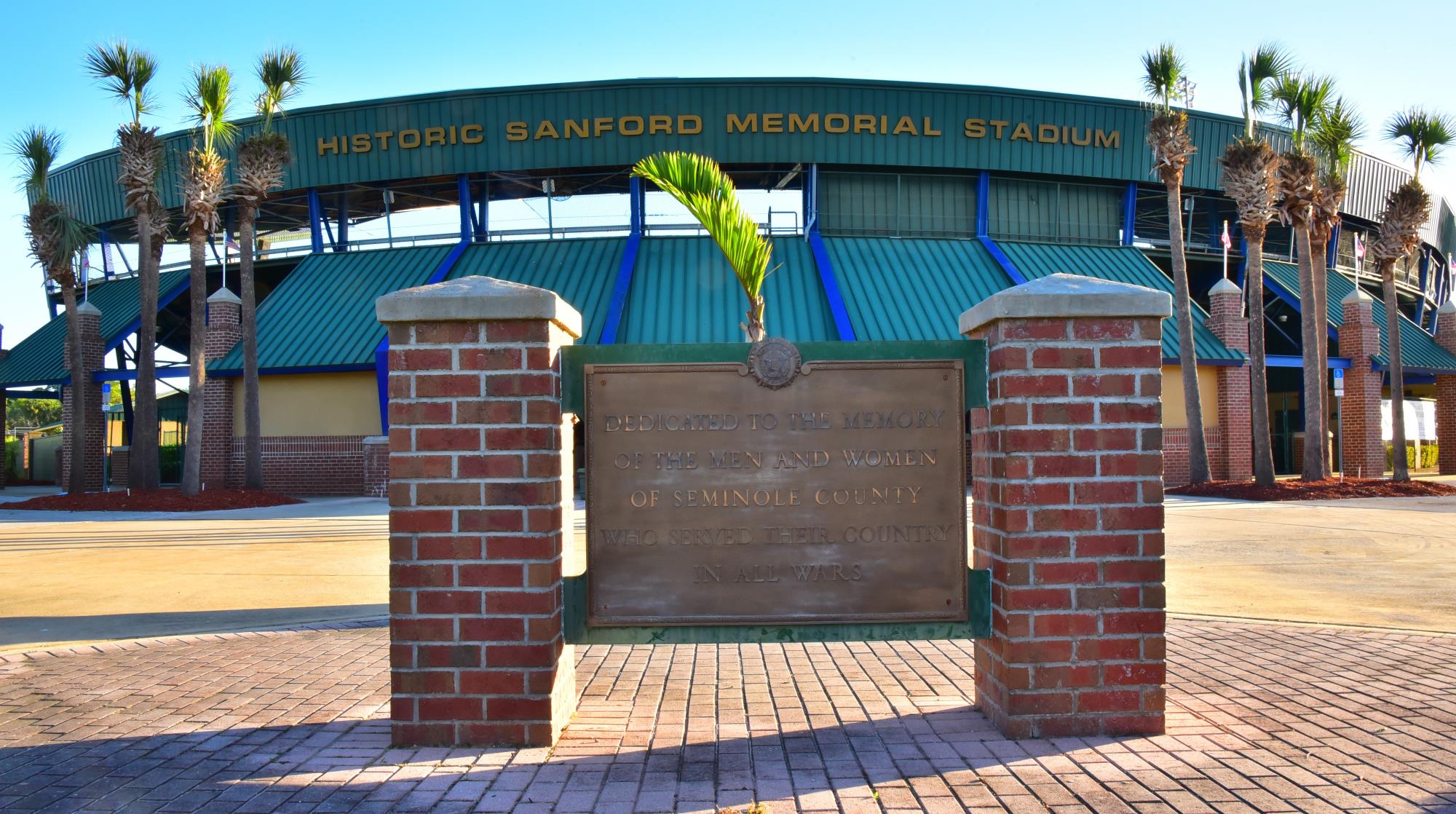 Outside of the Stadium 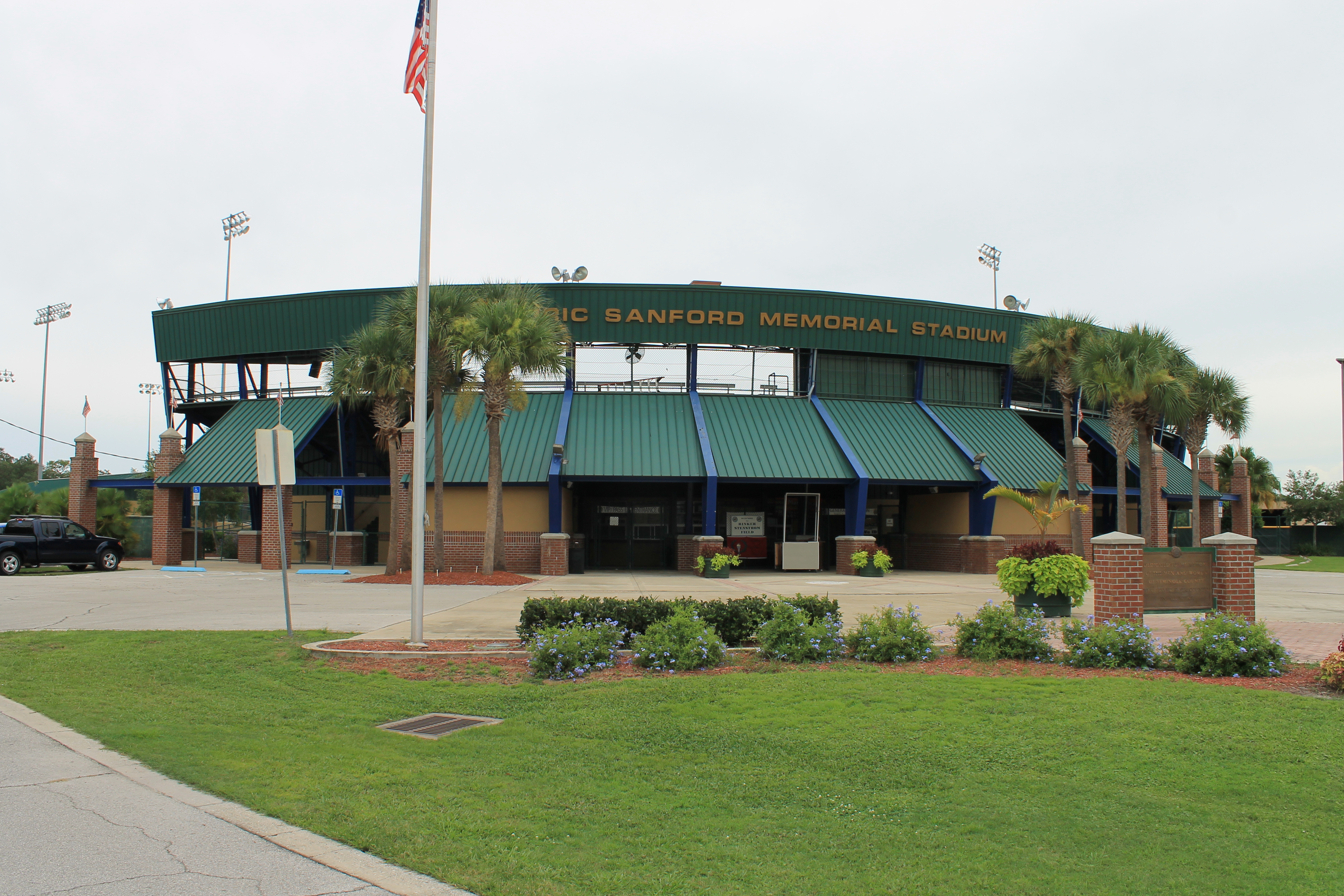 The original Sanford Stadium was created in 1925 during what was a time of huge population boost for the state. According to the US Census Bureau "Florida’s population increased by approximately 300,000 from 1920-1925". With all those people came an added need for entertainment. The Stadium was a venue for many a baseball games but was torn down in favor of the current version that was rebuilt in 1951. The renovated 2000-seat historic stadium once hosted the likes of Babe Ruth, Jackie Robinson, and Willie Mays. According to It was also once home to the New York Giants and the Boston Braves during spring training, certifying its importance in both baseball history and lore.

Today, the stadium is home to various baseball teams that use the field throughout the year. Some of those teams include the Sanford River Rats, the local home town team favorite of the Florida Collegiate Summer League, a wood bat summer baseball league that brings some of the top college baseball players to Central Florida every year. In 2001, It underwent some major reconstruction due to its age and condition. The remodeling included both clubhouses and new grandstands in the outfield. Some of the new features of the stadiums include 415 uncovered box seats, 1062 covered seats, as well as a new multi-purpose room (Buddy Lake Room) that can hold up to 50 people. (Ballpark Reviews)

On April 20, 1997, fifty years after Robinson had broken the color barrier in major league baseball, Mayor Larry Dale of Sanford issued a proclamation honoring Jackie Robinson and apologizing for the City of Sanford's, "...regrettable actions in 1946," when the city forced Robinson off Municipal Athletic Field. However, per author Chris Lamb's book, Blackout: The Untold Story of Jackie Robinson's First Spring Training, despitee the passage of over half a century, Mayor Dale's proclamation still didn't sit well with all residents of Sanford, especially those long-time residents or their descendants who were present or traced their lineage back to the city in 1946. Many believed that the city had let Robinson play and therefore had no reason to apologize, while others saw no reason to dredge up the sins of the past.

According to Lamb, Sanford’s historic field is the very site where Jackie Robinson first took the field. The distinction here is that he only ever took the field. As Lamb details in the book “The months between the signing of Robinson and the beginning of spring training saw an escalation of violence against blacks” This was a period in which whites regularly could murder a black man and get away with it simply because “because it had saved the courts the cost and trouble of a trial.” . Robinson never actually got to play a game on the field in Sanford. The first time he attempted it according to Lamb, people left in masse until they ended up canceling the game. “By the time Jackie got to first base on his second attempt to play. the uproar was tremendous. Jackie's attempt to break the color barrier would not be allowed to happen in this ballpark. He was escorted off the field, and he never returned to Sanford. “ (149) According to Lamb,

"Jackie Robinson made history in 1947 when he broke baseball’s color barrier to play for the Brooklyn Dodgers.  A talented and versatile player, Robinson won the National League Rookie of the Year award his first season, and helped the Dodgers to the National League championship – the first of his six trips to the World Series. In 1949 Robinson won the league MVP award, and he was inducted into the Baseball Hall of Fame in 1962. In 1997, MLB decided to celebrate the fiftieth anniversary of the color barrier being broken. he was given perhaps the greatest honor one could ever receive, His number 42 was retired by the entire league."

The Buddy Lake room is dedicated to the history of the sport and the people who play it. Bernard David “Buddy” Lake is the full name of one of the earliest people who used the stadium. Buddy was born in Louisville Kentucky in 1914.Then in 1916 he and his family came and moved to Sanford. He went to Seminole High School. His classmates and peers say that he was an amazing athlete probably even the greatest athlete they have met. He graduated high school in 1930. Buddy played in the minor leagues. In 1940 Buddy won the leagues batting title with a batting average of .352. He cemented himself leaving a legacy in July 19, 1947. Playing roughly 832 games in total. In the Florida state league, he was able to show off his magic. The Florida state league was a division in Florida for the minor leagues. (The Bokey, Orlando Sentinel)

"Then there was the time Lake, an accomplished hitter who won the batting title in 1940, pitched the Florida State League’s first perfect game against Sanford’s hated rival DeLand. He remains the only professional player in any league to win a batting title and pitch a perfect game. But Lake’s legend was cemented on July 19, 1947. Sanford traveled to Deland for a doubleheader. Lake played third base in the first game and took the mound for the second game. After 18 innings Lake was still on the mound pitching a shutout. The problem was his teammates weren’t providing any offense, so Lake took matters into his own hands and hit a solo home run in the top of the 19th. He held DeLand scoreless in the bottom of the inning and finished the evening with a 19-inning shutout, and a 1-0 Sanford win". (The Bokey)

Buddy did a lot of things in the span of almost three decades. He was playing, coaching and he drove the bus of his team through almost all his career. The position he played was pitcher. He batted both sides, and he threw with his right arm. During his career he played for 9 teams. Some in the New York leagues. And the rest in the Florida leagues. Buddy never played major leagues, but he did play with Babe Ruth. And pitched to Lou Gehrig a New York giant great. “Lake began his professional career in the New York-Penn League with the Boston Braves organization and went to spring training with the Braves in 1934 where he played with Ruth and pitched against Gehrig” (Orlando Sentinel). Buddy Retired in 1950. On March 1, 2013 at the age of 89 Buddy passed away. Loved by many, Buddy’s legacy will be forever remembered in the stadium. (https://www.baseball-reference.com/register/player.fcgi?id=lake--001ber) This is the website of the stats of Buddy Lakes whole career. (Orlando Sentinel, The Bokey, Baseball Reference)

Early Wynn a baseball legend was born in Hartford Atlanta on the 6th of January 1920. He died in Venice Florida on the 4th of April 1999. Early used to play football in high school but after a leg injury he turned his focus on baseball. When he was 17, he traveled to Sanford, so he can join a camp, that the baseball team, the Washington Senators were operating. During the camp a Washington scout was amazed with Wynn’s pitches and signed him a contract to play for them. With signing the contract Wynn quit high school and in 1937, he started his professional career in Sanford. After playing games in Sanford, Wynn would move on to play for other teams and that was the end of his relationship with the Sanford stadium. In the mid 1980's, Early retired from baseball. According to David, "He suffered a heart attack and a series of strokes during the final years of his life, and spent his remaining days in an assisted-living center in Venice, Florida, where he died on April 4, 1999, at the age of 79". (SABR)

All photos are from the above sources.