This historical marker is located in a reconstructed Native American village within the Jamestown Settlement living history museum. The reconstruction is was based on primary sources left by colonists as well as archaeological evidence from settlements of the Paspahegh, the Powhatan tribe located the closest to Jamestown. The marker includes illustrations of the village and its inhabitants.

Powhatan Confederacy Territorial Map, courtesy of the Powhatan Museum of Indigenous Arts and Culture (image reproduced under Fair Use) 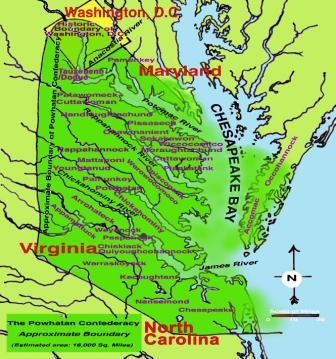 Woodcut by Matthäus Merian depicting the 1622 attack during the Powhatan Wars (1628; public domain)

Powhatan Indian Village marker by Bill Coughlin on HMDB.org (reproduced under Fair Use) 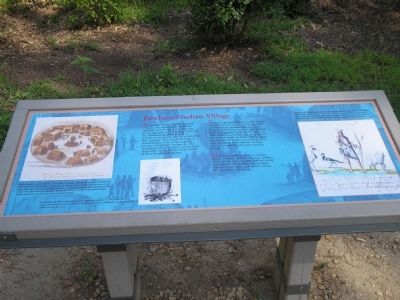 For over forty years, there was a series of on-and-off warfare between the English colonists of Virginia and their indigenous neighbors. The Anglo-Powhatan Wars, also known as the Tidewater Wars, were the most serious of these conflicts. The first war occurred in 1609, with two more occurring in 1622 and 1644. All of them resulted in English victories and allowed the colonists to continue their expansion as Native American power declined.

The Anglo-Powhatan Wars were a relentless struggle between the early English settlers and Native Americans in the tidewater section of Virginia and Southern Maryland. In 1607, English settlers arrived in the area and established Jamestown, the first permanent English colony in the Americas. At the time, the area was known to natives as Tsenacomoco. It was comprised of around thirty separate tribes, led together under the Chief Powhatan, also known as Wahunsonacock. Wahunsonacock at first attempted to make peace by engaging in trade with the English colonists, who were unable to provide for themselves and were in desperate need of food. Tensions began to grow however as the colonists continued pressuring the natives.

Acts of violence began to occur between the English and the natives, resulting in the First Anglo-Powhatan War in 1609. Wahunsonacock and his forces began a months-long siege against Jamestown, in which all but sixty of the colonists died of starvation and disease. English reinforcements arrived in May 1610, allowing the colonists to launch a counterattack. Fighting continued over the next four years. A peace was concluded in 1614 when Wahunsonacock’s daughter Pocahontas, who had been captured the previous year, converted to Christianity and agreed to marry Englishman John Rolfe. Pocahontas died while visiting England in 1617 and her father died the following year.

The peace proved to be temporary and tensions again rose as the English began claiming more and more land up the James River. The Second Anglo-Powhatan War began in 1622, when the Powhatan confederacy's new chief, Opechancanough, led his people in a surprise attack against colonists throughout the area. Opechancanough, hoping to batter the English into submission, inflicted significant damage on the settlements, killing as much as one-third of the colonial population. The English counterattacked, reaching a climax in 1624 with the only full-scale battle of the war. It would still continue until 1632, when an unspecified peace was agreed between the two sides. By this point it had become clear that the balance of power was now skewed in the English colonists’ favor.

The third and final Anglo-Powhatan War started in 1644, when Opechancanough launched another uprising against the English. Although many colonists were killed, the attacks were limited to the outskirts of the settlements and failed to threaten the existence of the Virginia colony as a whole. The war came to an end in 1646 when the English captured and killed Opechancanough. Afterwards a treaty was signed restricting the indigenous population to the north side of the York River.

At the beginning of the Anglo-Powhatan Wars the colonists’ militia was disorganized, but it recovered enough to have an effective defense and carry out several campaigns against Powhatan villages. The militia adopted tactics from the indigenous peoples, attacking Powhatan villages, burning them to the ground, and seizing food stocks. The Anglo-Powhatan Wars signaled the dominance of English power over the indigenous population, resulting in further colonial expansion.