1. History of the New Canal Lighthouse

This may seem like a strange place for a lighthouse but the lighthouse is here for the same reason New Orleans is here. It's all about shipping. Traveling up through the mouth of the Mississippi River on sail was quite difficult. The Mississippi was a very large, sediment laden river, with shifting shoals at the mouth hindering navigation. The estuary of Lake Pontchartrain provided the perfect solution. Ships were able to travel from the Gulf into the estuary and down a natural way called Bayou St John. The Bayou brought the ships within easy portage distance to the Mississippi without having to go through the mouth of the river. The Louisiana purchase in 1803 brought tensions between the French Creole who operated the Bayou St John canal and the Americans pouring into town. Soon the Americans decided they needed to build their own canal, the New Basin Canal. The canal company sent representatives to Ireland to recruit workers desperate from the potato famine. The Irish came to New Orleans by the thousands to dig the canal with shovels and wheel barrels for less than $1/day. It is estimated that 8,000-10,000 died during the creation of the canal thru mosquito infested swamps, yellow fever, typhoid fever and malaria. A Celtic cross as a remembrance of the Irishmen who died during the digging of the canal stands on West End Blvd. The original New Basin Canal was 6 miles long, 6 feet deep, 60 feet wide, took 6 years to build. It has since been mostly filled in to make room for I-10. At the mouth of the canal, is where they build the first New Canal Lighthouse.

2. History and Ecology of the Pontchartrain Basin 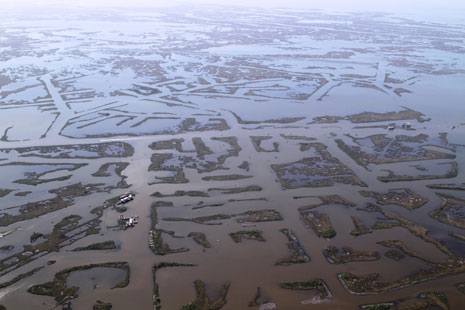 By the 1700’s the Mississippi River had shifted paths back and forth several times - spreading sediment and creating land at the end of an ever-changing delta. The Pontchartrain Basin stretches out into the Gulf of Mexico as a 10,000 square mile watershed from the Mississippi River to the Pearl River and includes 16 Louisiana Parishes and 4 Mississippi Counties. The construction of levees along the Mississippi River prior to the 1927 flood prevented communities from being flooded but also cut off the nutrients, freshwater and sediment that nourished our wetlands. During the 1927 flood, it became clear that the levees alone were not enough to protect communities and outlets were needed along the river relieve flood waters. During the flood, the levees were breached at Caernarvon and flood waters lowered near New Orleans. The realization that relief outlets were need prompted the construction of the Bonnet Carré Spillway in the 1930's. In the 1930’s logging of cypress trees in the coastal swamps for their valuable wood resulted in saltwater intrusion from the logging canals (and later the oil and gas canals) which prevented new cypress from growing. This and the introduction of the invasive nutria (Myocastor coypus), which feed on young cypress, prevented natural swamp regeneration. Ultimately the loss of the cypress destroyed the buffer against storms that the coastal swamps provided the urban areas. In the 1940’s nutria, an invasive species of rodent brought in from South America, added to the coastal woes. A voracious eater of wetland vegetation roots, the nutria has annihilated miles of protective marshland. As the century continued, oil and gas became prominent economic drivers and critical resources for our nation. Access to these was provided by navigation canals and pipelines which crisscrossed South Louisiana marshes. Unfortunately, in the process, the coastal marshes were lost when spoil banks were left randomly throughout the area, disastrously altering the natural hydrology of the region. The canals caused saltwater intrusion and more land was lost. Looking back through the 20th Century, to a large degree, the reduced coastal hurricane protection for South Louisiana was the result of poor decisions made in the 1900’s.

Welcome to the New Canal Lighthouse! The Lighthouse is the education center for the Pontchartrain Conservancy whose mission is to drive environmental sustainability and stewardship through scientific research, education, and advocacy. The Lake Pontchartrain Basin is a 10,000 square mile watershed encompassing 16 Louisiana parishes. The land use of the region is both rural and urban and is the most densely populated region in Louisiana, including metro New Orleans and the state capital, Baton Rouge. It is one of the largest estuarine systems in the Gulf of Mexico containing over 22 essential habitats. The Basin's topography ranges from rolling woodlands in the north to coastal marshes in the south, with the 630 square mile Lake Pontchartrain as its centerpiece. Take our the New Canal Lighthouse Tour to learn about the Pontchartrain Basin, our coastal and water quality programs and the Lighthouse itself. To start press the Take Tour button on the app or web page.