Starting at the marked trail-head and running along the Greenbrier River for all of its entirety, the Greenbrier River Trail is a rail-to-trail path stretching from North Caldwell, West Virginia to Cass, West Virginia. Once a transport route for the Chesapeake & Ohio Railway Company, the railroads were abandoned in 1978 due to inactivity. In 1980, the railway was converted into a 78-mile-long trail, consisting of 35 bridges, two rail-bridges, and two rail-tunnels. Today, the trail is featured as one of the country's best hiking trails, and is ideal for anyone of any biking experience.

A sign along the Greenbrier River Trail tells of the efforts of Mark Ligon Hankins towards the establishment of the trail. Courtesy of J. Watson.5 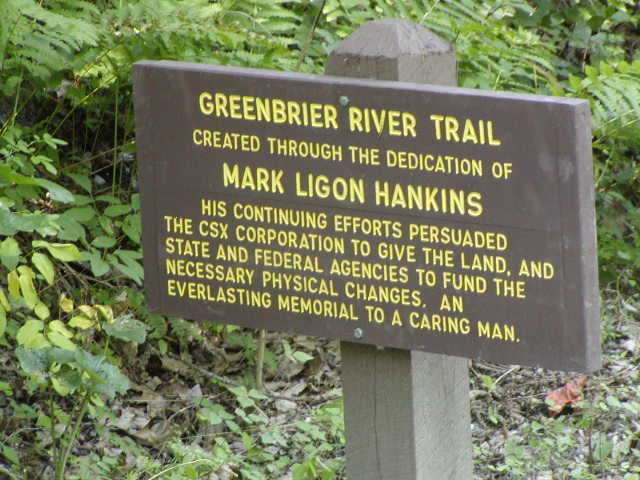 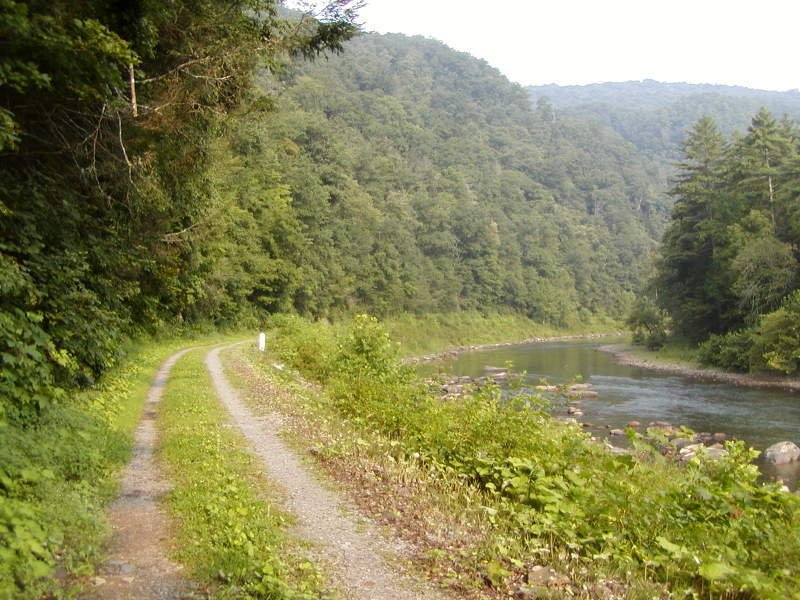 In the late 1800s, West Virginia's coal and lumber industry was booming. Coal was a common necessity, and the Greenbrier Valley area contained previously untouched forests, which meant a bountiful supply of lumber.  The demand for these resources brought the need for transportation, and on November 16, 1897, the Chesapeake and Ohio Railroad Company, or C&O, organized a charter for construction to begin on the Greenbrier Railway Company. The railway, which began at Marlinton, WV, ran along the Greenbrier River itself.

For many years, the railway provided transportation for many well-known businesses, such as the West Virginia Pulp and Paper Company, the Greenbrier River Lumber Company, and the West Virginia Spruce Lumber Company. Transportation of livestock was also common. As the forests had been picked-through and the Great Depression hit, the condition of the industries declined. Not enough resources were being transported on the trains, and in 1970, C&O proposed the idea of complete abandonment of the Greenbrier Railway Company. They argued that it would cost too much to attempt to keep the railway in business. Approved in 1971, C&O officials began to slowly shrink the workforce of the rails. C&O contacted the Interstate Commerce Commission on March 18, 1975 with desires to abandon the railway completely. Blaming the abandonment on maintenance issues and little transportation, C&O planned to include the entire Greenbrier Division, which was 92 miles long. On August 16, 1978, the ICC approved the abandonment, and informed everyone that all operations of the line would cease on December 29, 1978. The abandoned line was 92 miles long, from Caldwell to Durbin.

Prior to the closure of the Greenbrier Division, C&O, B&O, and WM all morphed together to become what was called the Chessie System. In July 1979, the rails were removed and sold to the state for use on the Cass Scenic Railroad. The track sold for $598,730.1 With the track gone, on June 20, 1980, Chessie gave the 92-mile line to West Virginia for rail-to-trail purpose. Thus, the Greenbrier River Trail was born.

Today, the Greenbrier River Trail is considered one of the country's best hiking trails (Backpacker Magazine) and is one out of 50 Millennium Legacy Trails. 78 miles long, the trail runs from North Caldwell, WV, to Cass, WV. The trail features two railroad-tunnels, two railroad-bridges, 35 bridges total, and runs through many WV small towns.3 The trail also runs through the National Radio Quiet Zone - established in 1958, the NRQZ was created to protect the Robert C. Byrd Green Bank Telescope, which is located at the National Radio Astronomy Observatory in Green Bank, WV.4 At less than a one percent grade, the entire trail is virtually flat, with several access points. This flatness makes the Greenbrier River Trail so unique because of its location - West Virginia, one of the most mountainous states, is completely flat with less than a one percent grade for 78 miles.