Fontaine Ferry Park was opened in 1905 and closed shortly after its integration in 1969 due to vandalism. The park was named after Aaron Fontaine, a Captain in the Revolutionary war who purchased the land on which the park was later built. It was wildly popular among Louisville and the greater Louisville populations, but only those who were white could gain entry into the park. Many demonstrations and protests were held outside of the park in the early 1960s during the Civil Rights Movement but the park was one of the last to integrate in 1964. 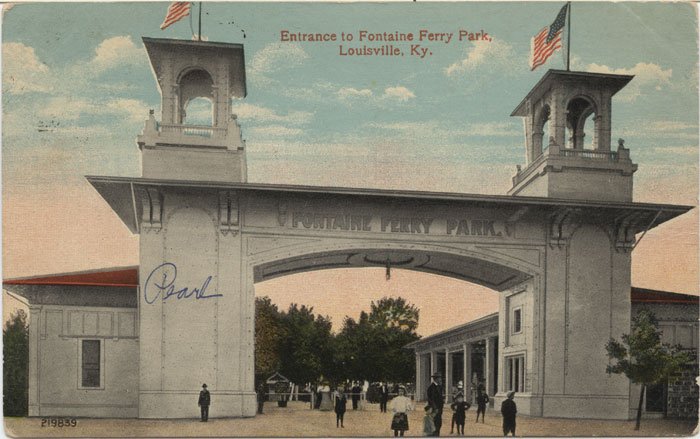 Photo portraying a protest at Fontaine Ferry Park in 1961 when the park remained segregated after Louisville desegregated parks in 1955. The Courier-Journal 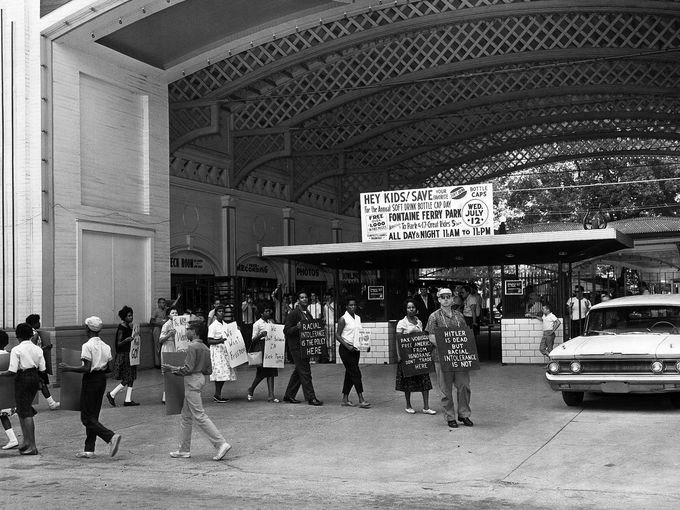 Fontaine Ferry Park (opened 1905, closed 1969) was named after and built upon the land originally purchased by Aaron Fontaine. His name was commonly mispronounced, "Fountain" and thus became the local pronunciation for the park's name. Fontaine was born in Virginia and served in the Revolutionary War. He became quite rich from his position as Captain in the Virginia militia, and moved to Louisville, Kentucky when the war ended. With his wealth, he was able to purchase a couple hundred acres of land in 1814 and soon procured a Ferry that traveled from Fontaine's property, across the Ohio, to the bank of Indiana (thus the name, "Fontaine Ferry"). Aaron Fontaine died in 1823, but the amusement park did not open until 1905. After Fontaine's death, the property was purchased by Tony Landenwich, who established a hotel, a restaurant, a bandstand and a bicycle racing track on the property. An architect was hired to design the park in 1903, and the park opened on 64 acres of Captain Fontaine's original property in May, two years later.

The park was unrivaled in popularity in and around the Louisville area for the majority of its lifespan. People were able to travel to the park on the river by both steam and flat boats as well as trolley cars run by the Louisville Railroad company in the 1930s. The park offered over fifty rides and attractions including four major wooden roller coasters which were a new invention and an engineering marvel at the time, a large swimming pool, a skating rink, as well as hosting many popular musicians and other entertainments.

The park was not a place of pleasure and excitement for all, however. The amusement park was one of the longest segregated spaces before the Civil Rights Act and did not desegregate until late in the year of 1964. Although white visitors remember the park fondly, some recall the park's segregation as a prominent feature. On a blogging portion of a website dedicated to the remembrance of Fontaine Ferry, a woman writes about her pleasant experiences at the park and sums up the African American presence there. She states,

I also remember the attendant in the women's restroom, which by the way was probably at the time, the only African American person in the park. She wore a white uniform with black and white checkered collar and sleeves. In those days African Americans were not allowed in the park nor the pool.

She then continues on, recounting her treasured memories. A very different experience is recounted by an African American woman: In a local newspaper article that was published in 2014, entitled "The Struggle for Human Equality", the author tells the story of a woman who remembers the very first day she learned what the term "racism" meant. On that day, her school from New Albany, IN took a field trip to Fontaine Ferry Park. As they descended from the bus, the black children were separated as the white children went screaming with excitement into the park. The black students sat at picnic tables outside of the park and watched as their friends and classmates enjoyed the day. The article then goes on to discuss other places around Louisville that did not allow African Americans to eat, shop, or even use the restroom.

Many demonstrations were held by young African Americans outside of the park as well as many other locations in Louisville calling for desegregation. The park was finally integrated in 1964, but was shut down in 1969 due to the severe racial unrest and tension that resulted in vandalism, riots and fights. The park re-opened under the new name of Ghost Town on the River but was not successful and held true to its name as attendance was low - truly embodying a Ghost Town. It officially closed down in 1975; the site was cleared in 1981 and nothing has been erected on the property since.

Kleber, John E. The Encyclopedia of Louisville. Lexington: The University of Kentucky Press, 2001.