Located in the Wiles Hill neighborhood of Morgantown, the Fourth Ward School, known locally as the Wiles Hill School was built in 1910 and remained in operation until 1999. One of the few urban school buildings remaining in Morgantown, Wiles Hill served as the face of the neighborhood for over 90 years. The school is made up of the original 1910 structure as well as additions built in 1939 and 1952 and a gymnasium built in 1983. The school was placed on the National Register of Historic Places in 2004 and is now home to the BOPARC Adult Recreation Center. 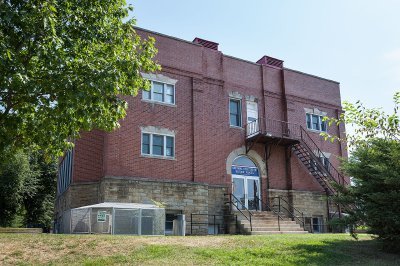 "A small school with a big heart." Wiles Hill School has been intertwined with the Morgantown community since its establishment in 1909. Prior to the construction of the school building, children of the community were educated in the local German Baptist Church in the latter half of the 1890s. This was adequate at the time for the Wiles Hill area was sparsely populated until 1900. At that time, ten glass companies opened their doors within walking distance of Wiles Hill. Due to this introduction of industry, the population of the neighborhood expanded almost overnight. In 1898 their was one home located on Wiles Hill, in 1903 there were over 150 houses located in the Wiles Hill neighborhood.

Due to the tremendous increase in population of the neighborhood, the Morgantown School board understood it needed to expand its facilities. The school board passed a bond issue, which included a plan to build a school on Wiles Hill in May of 1909 and construction on the school building began that fall. Wiles Hill school is just one of the eleven ward schools created in the period from 1900 to 1932 and is a result of the transformation of Morgantown from a backwater hamlet to a industrial city.

The school served the community for the next ninety years, seeing thousands of students pass through its doors. The building itself received expansions in 1939 and 1952 as well as a gymnasium in the 1980s to increase its facilities. The 1939 addition was built under the Federal Public Works Administration, a New Deal organization during the Great Depression. A plaque in the school commemorates this addition and still hangs on the wall in the building.

The Wiles Hill School remained in operation until 1999, until it was replaced by bigger and more modern schools. The future seemed dim for the building. Thanks to a number of alumni, the school was put on the National Register of Historic Places and transformed into a community center administered by BOPARC. Through this transformation, the building still continues to proudly serve the community in which it helped create.