Built between 1892 and 1905, Saint Vincent Basilica is an iconic structure on the Saint Vincent campus, which comprises a Catholic parish, archabbey, liberal arts college, and seminary. The beautiful Romanesque Revival basilica is a well-known feature of the Latrobe area landscape. Guided tours are available on select weekends of the year and mass is celebrated every day. 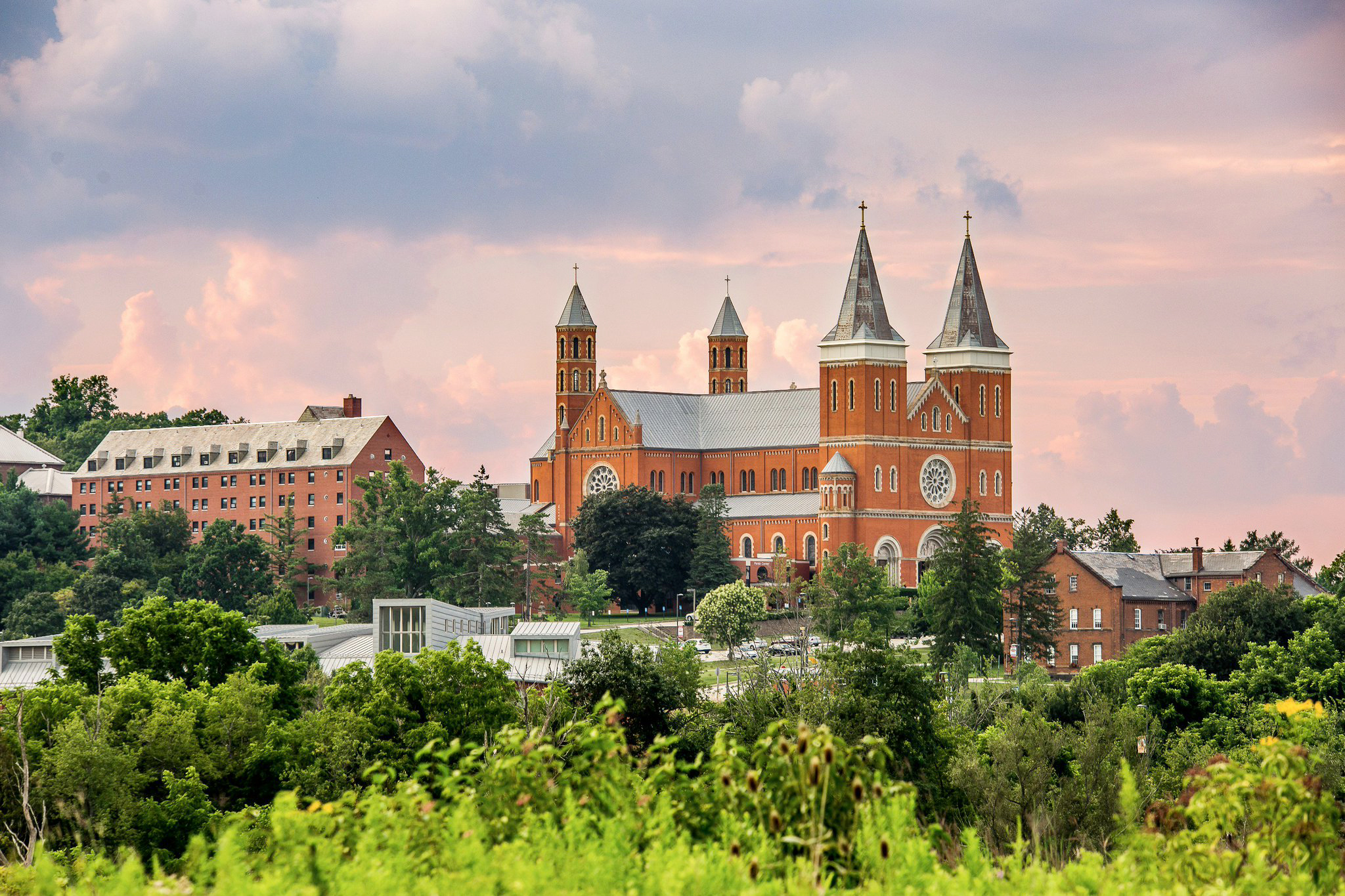 Saint Vincent Basilica has Romanesque Revival design, shown best in the rounded arch windows, and is shaped like a cross. 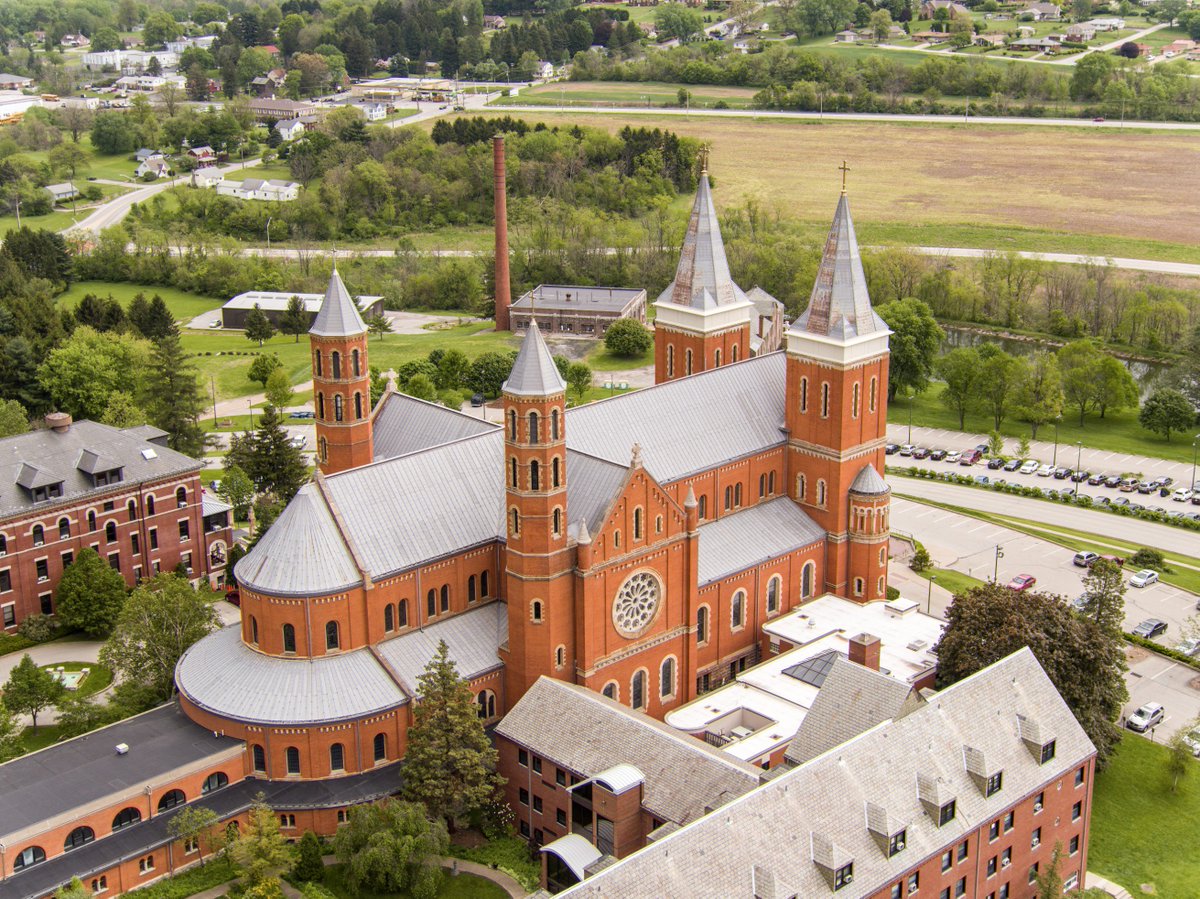 The "Basilica Builders" pictured in October 1896, holding the tool of their trade. 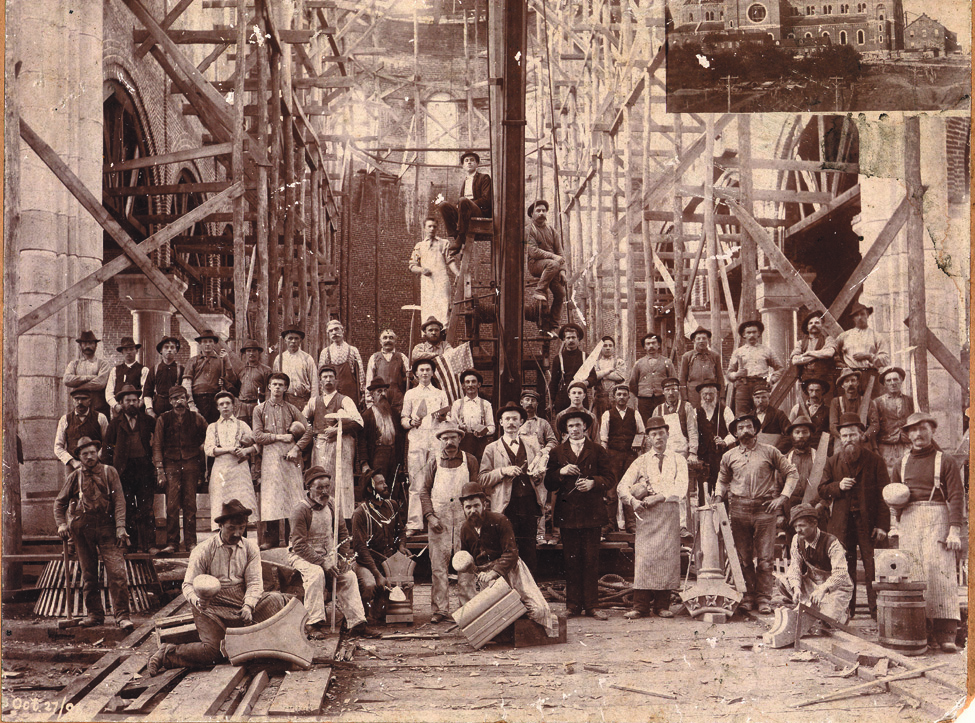 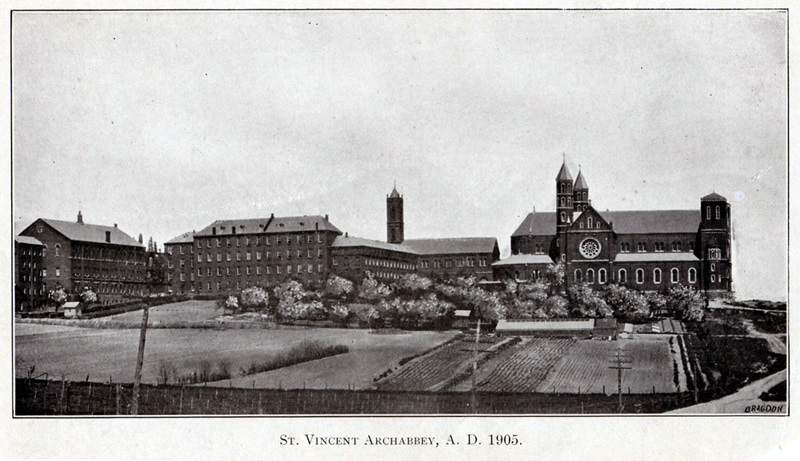 Saint Vincent Basilica's story begins long before it was constructed. The land has been home to a Catholic parish since April 16, 1790, when Fr. Theodore Brouwers, a Franciscan friar, brought together the first Catholic congregation west of the Allegheny Mountains in Pennsylvania. Sportsman's Hall Parish was named for the 300 acre tract of land Brouwers purchased. The first church on this site was Brouwers' humble log cabin, which was then succeeded by a formal church in 1810 and a larger one in 1835. The 1835 church, dedicated on the feast of Saint Vincent de Paul, was named Saint Vincent Church. It would be the primary church until the basilica's completion in 1905, and would function as the student chapel until 1963, when it was destroyed in a fire.1

The mid-nineteenth century saw a number of major changes at Saint Vincent, many originating with Fr. Boniface Wimmer, a Benedictine monk from Germany. Wimmer brought the Benedictine order of Catholicism to the United States when he established a monastery and liberal arts college in 1846 and a seminary in 1855, all bearing the name of Saint Vincent. Wimmer's ambitions also included a new church. Although he did not live to see its construction, Wimmer's dreams helped shape the basilica's magnificence.2

J. William Schickel, a German immigrant who completed 300 projects in his lifetime, designed the basilica for Saint Vincent. He envisioned a towering brick structure in a traditional cross-shaped layout. The architecture style, Romanesque Revival, was common in churches and harked back to an older version of the style, which originated in eleventh and twelfth century Europe. Saint Vincent Basilica incorporates classic Romanesque features: rounded Roman arches, thick walls, vaulted ceilings, and towers. It echoes a variety of other famous buildings such as the Allegheny Courthouse in Pittsburgh and the Smithsonian Castle in Washington, D.C.3

People from around the world made the basilica a reality. Monks at Saint Vincent created millions of red-orange bricks that give the building its distinct appearance. After the cornerstone was laid in 1892, materials arrived to decorate the interior: an oak pulpit from a New York architect, rose-colored granite columns from Scotland, marble from Tuscany, along with various statues and stained glass windows. Due to financial constraints, the tall, intricate steeples in the original design could not be built. The basilica was consecrated in on August 24, 1905. Renovations over the years added a crypt, restored the interior, and cleaned the soot-covered brick, stonework, and windows. The towers were finally topped with two gray spires in 1999, in celebration of the new millennium.4

Today, Saint Vincent Basilica represents a long religious tradition on Saint Vincent grounds. Members of the Saint Vincent community gather at the basilica daily for prayer and for special welcome masses and baccalaureate celebrations. Musical recitals are often held in inside the basilica's beautiful halls, especially around the holidays. Renowned cellist Yo Yo Ma performed there in 2014 when he received the Fred Rogers Legacy Award. Behind the basilica is the beautiful Sebastian's Garden, cultivated by and named for the late Fr. Sebastian Samay. Visitors are welcome to attend services and guided tours that explore the basilica's history, architecture, and traditions.