The building located on M Street is the only remaining structure of the Fresno Brewery Company, which was founded in 1900 by Ernest Eilert. The brewery operated in different capacities until 1955. The remaining building is listed on the National Register of Historic Places. 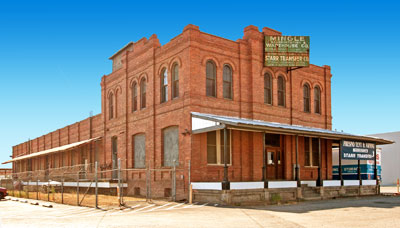 The Fresno Brewery Company was founded in 1900 by Ernest Eilert, a German immigrant who moved to California from Wisconsin. Eilert had also operated a brewery in Wisconsin based on German methods of brewing beer.

Though Ernest Eilert died in 1902, his family continued to operate the brewery. They brewed beer until 1919 when Prohibition went into effect. They brewed non-alcoholic drinks during the years of Prohibition, but resumed the production of beer following the repeal of Prohibition in 1933.

The Fresno Brewery Company was the first and largest brewery in Fresno, and at its peak, it employed more than 1,000 people. The complex originally occupied some twenty acres, and included a six-story building referred to at the time as a skyscraper, as it was one of the tallest buildings in Fresno.

After changing owners several times, much of the brewery was demolished in 1955. The remaining building is listed on the National Register of Historic Places.