Mt. Hope Cemetery of Bangor, Maine, is a well-loved area of quiet respite for locals of the city. First opened in 1836, the cemetery has existed as a part of the city for a long stretch of its history. A number of incredibly famous and influential historical figures have been interred in the cemetery, and the cemetery is home to both a Civil War and a Korean War memorial that frequently are the site of events by groups commemorating the United States’ military legacy. The cemetery is, as of the creation of this article, the largest it has ever been, containing over three hundred acres (up from fifty acres at its construction.) 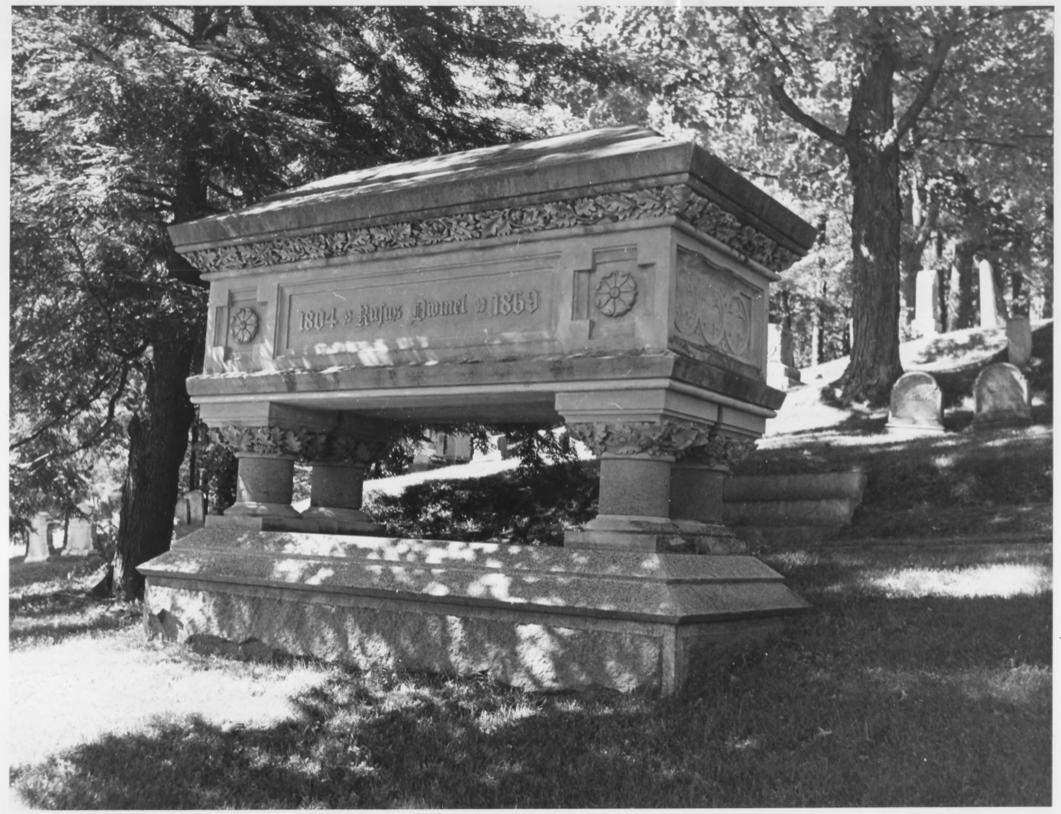 A Northeastward Tomb Within the Cemetery by Earle G. Shettleworth, Jr. on 8/20/74, Public Domain Photo Provided by NPS 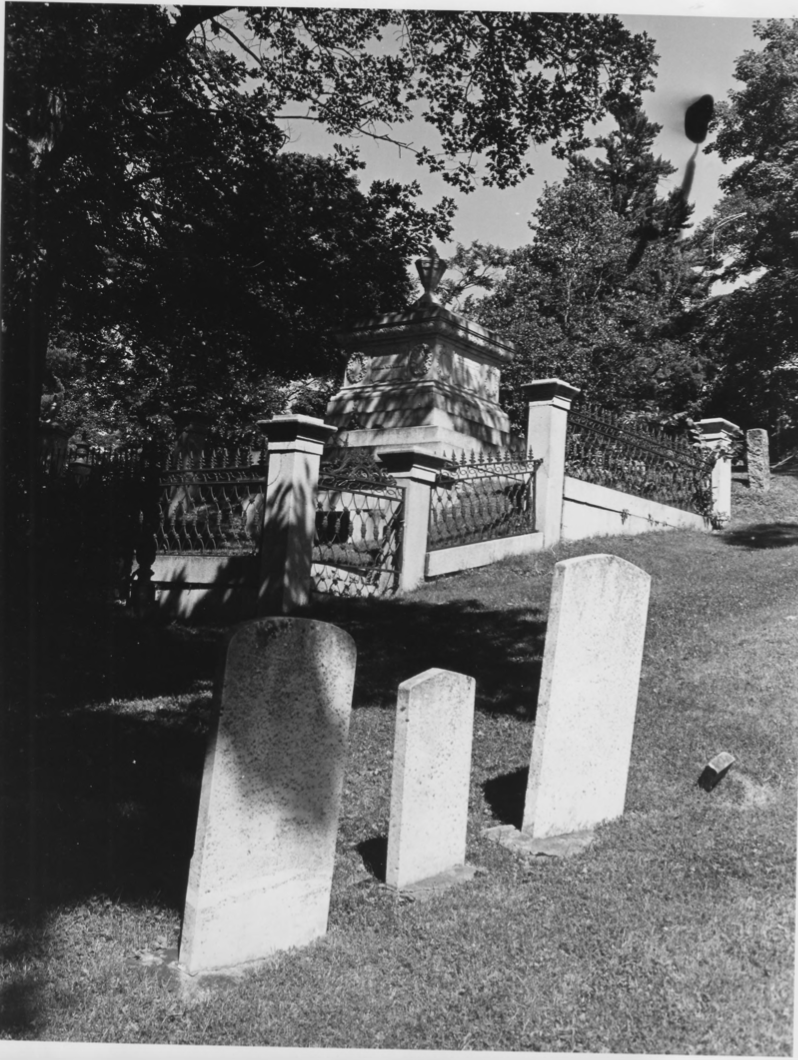 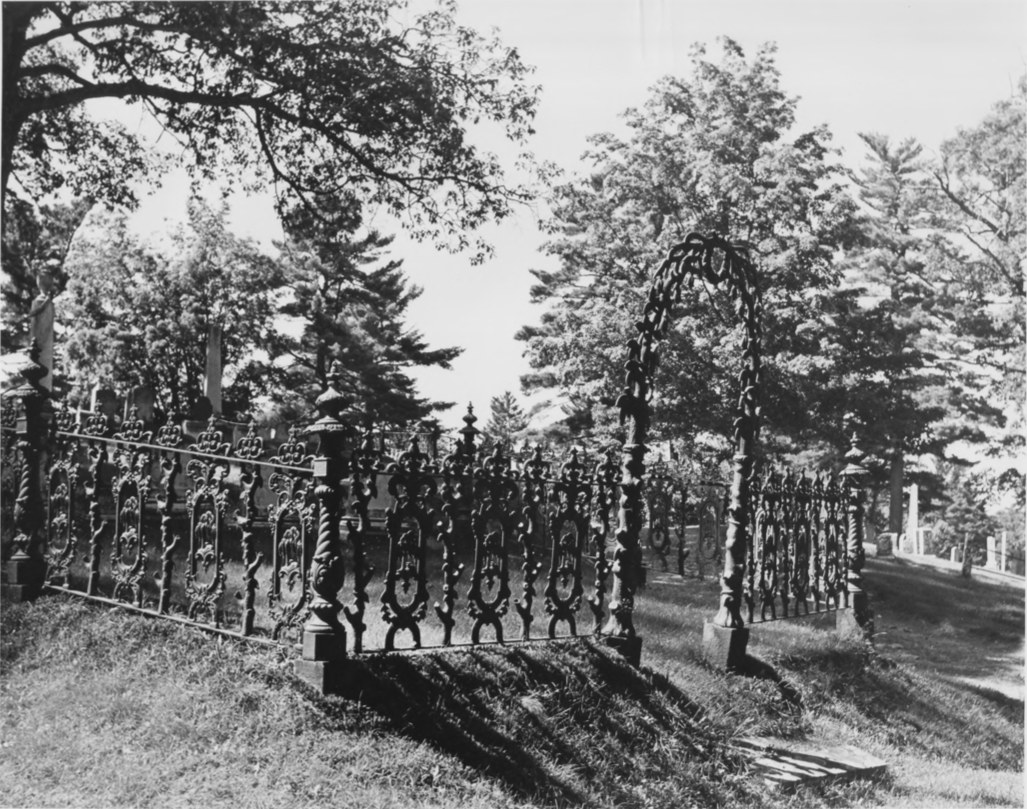 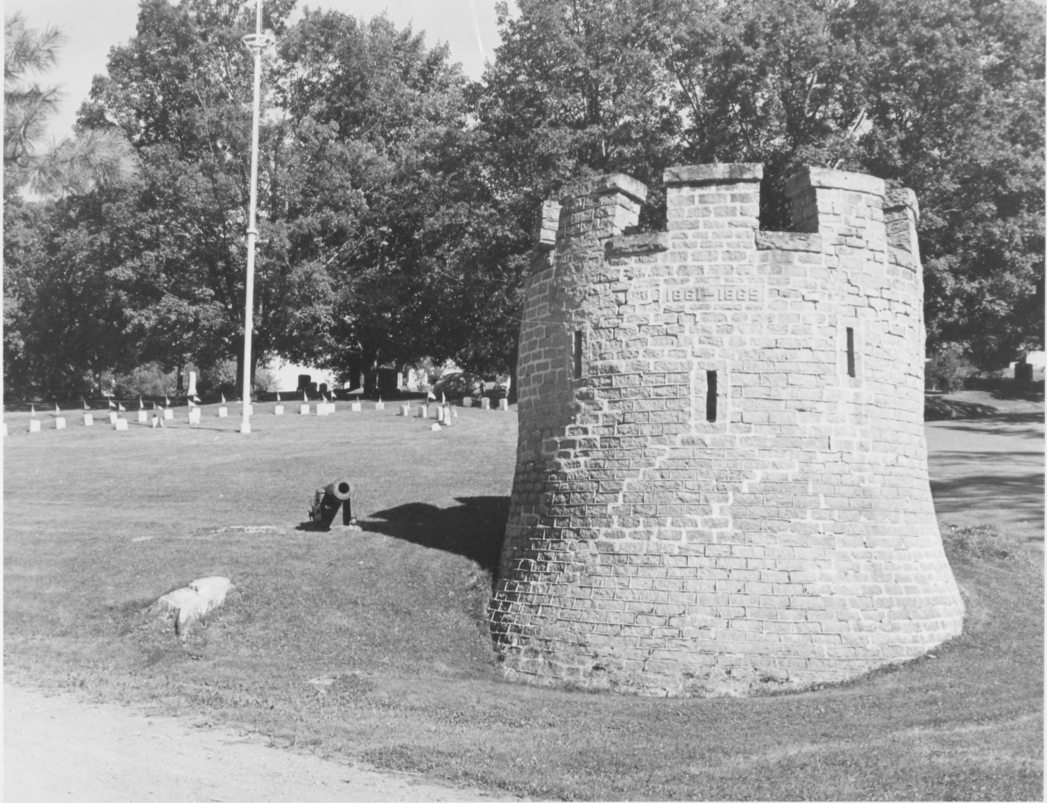 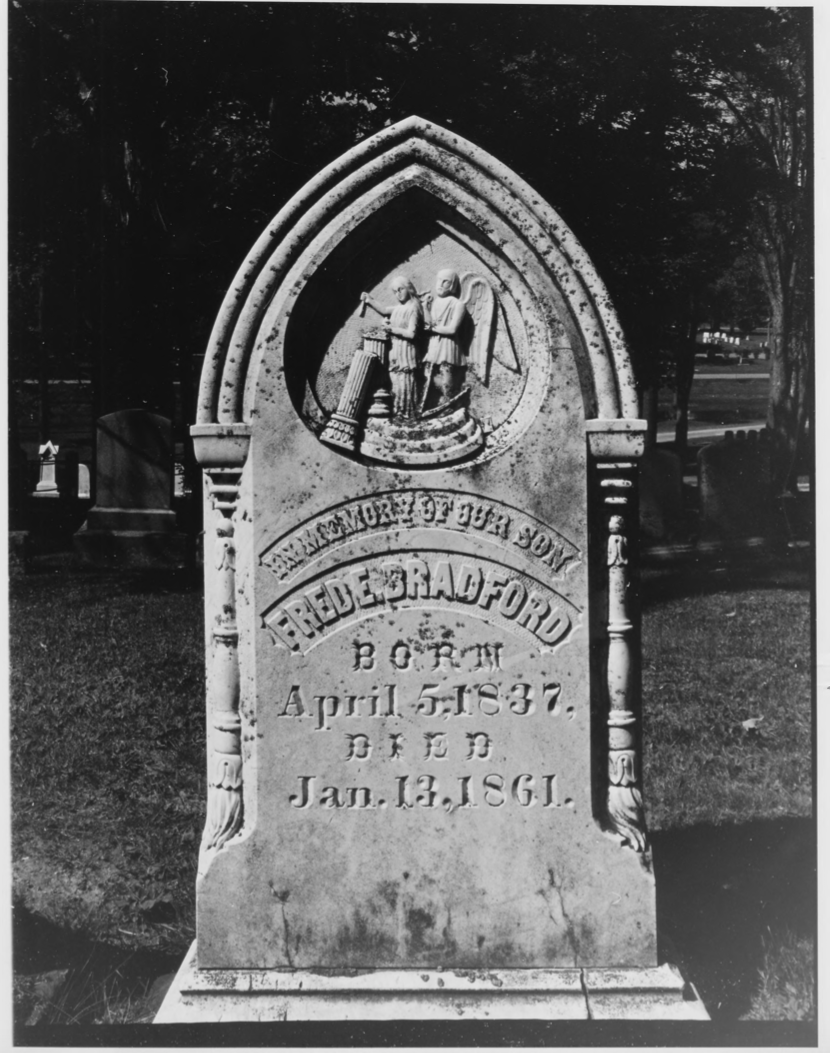 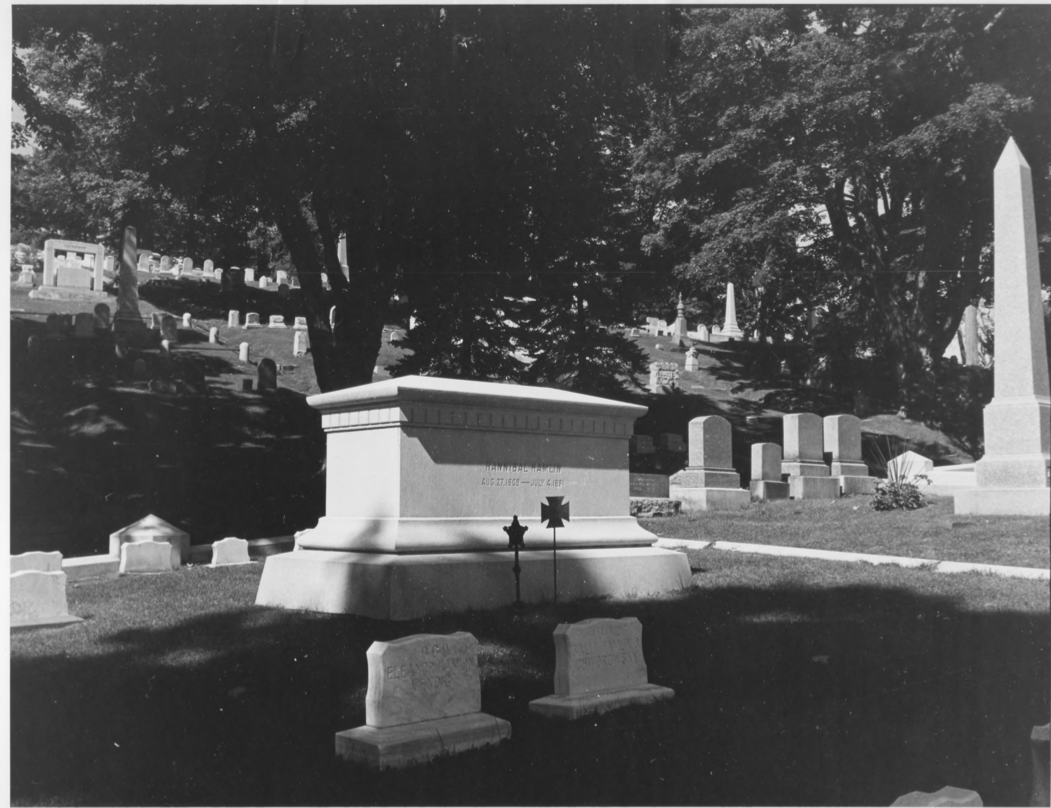 A Hill in the Northeast of the Cemetery Grounds by Earle G. Shettleworth, Jr. on 8/20/74, Public Domain Photo Provided by NPS 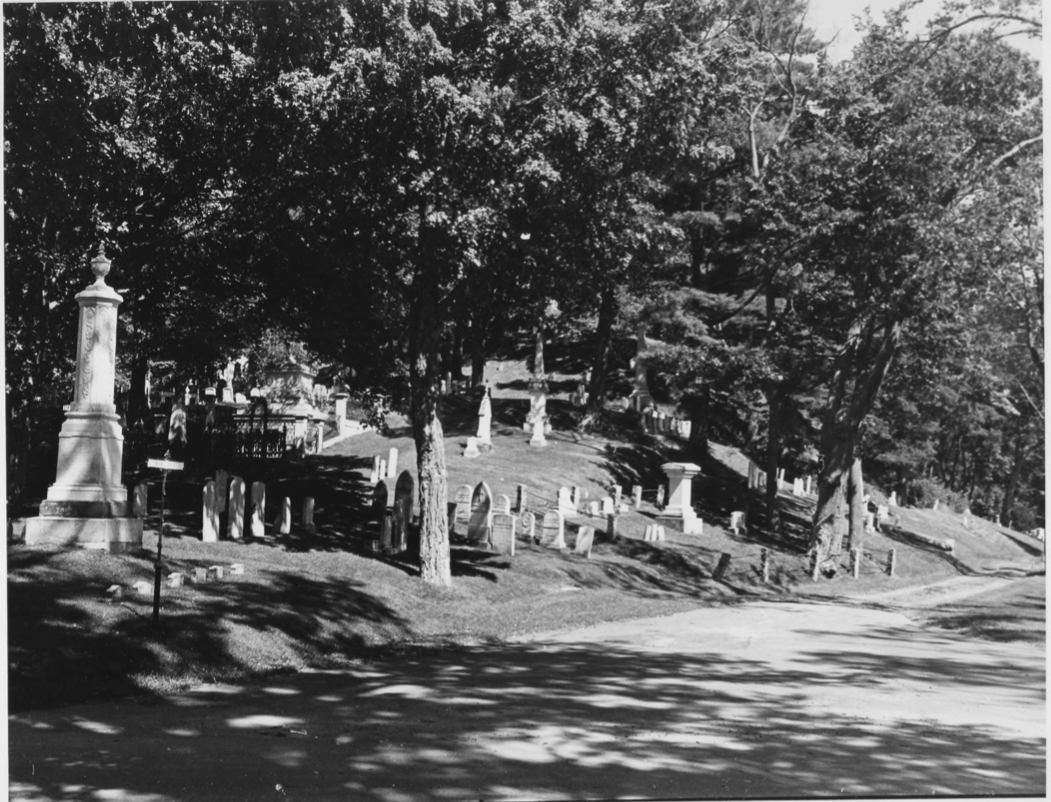 A Noteworthy Monument Within the Grounds by Earle G. Shettleworth, Jr. on 8/20/74, Public Domain Photo Provided by NPS 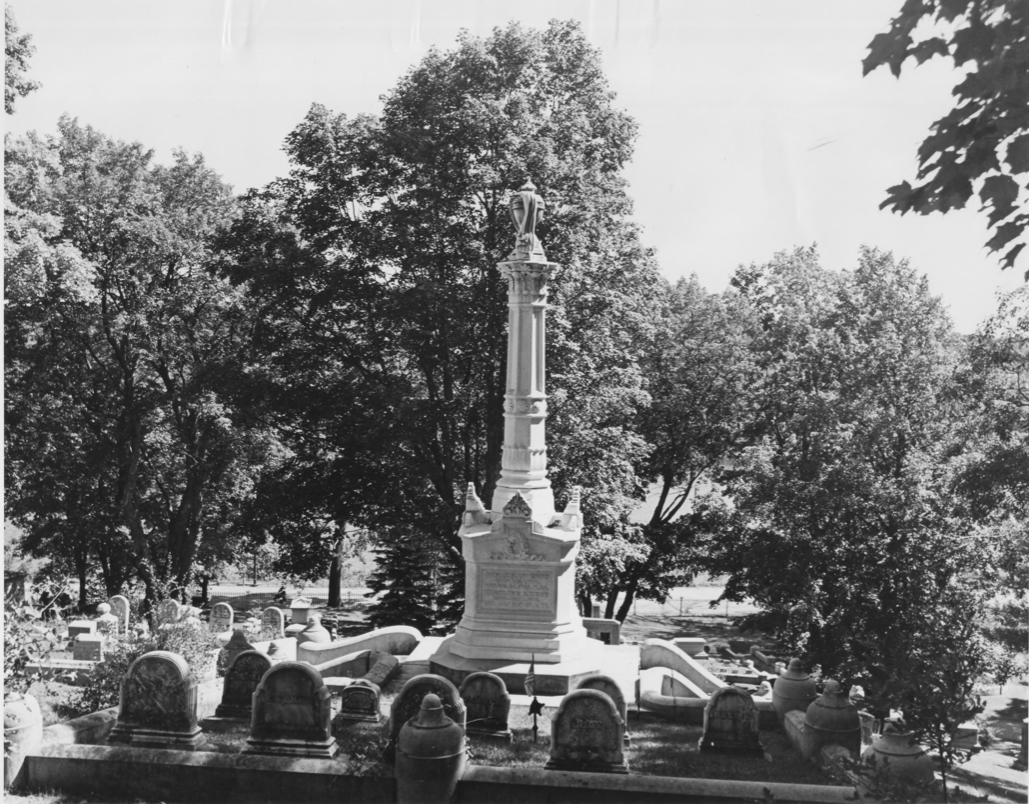 A Photograph of the Mount Hope Korean War Memorial, Provided by bangorinfo.com 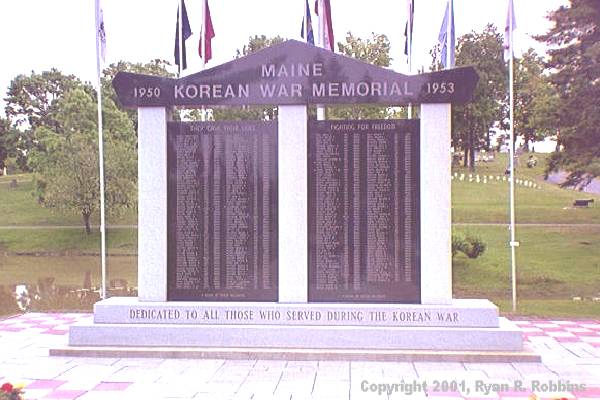 Signpost for Laurel Ave. Within the Cemetery by Earle G. Shettleworth, Jr. on 8/20/74, Public Domain Photo Provided by NPS 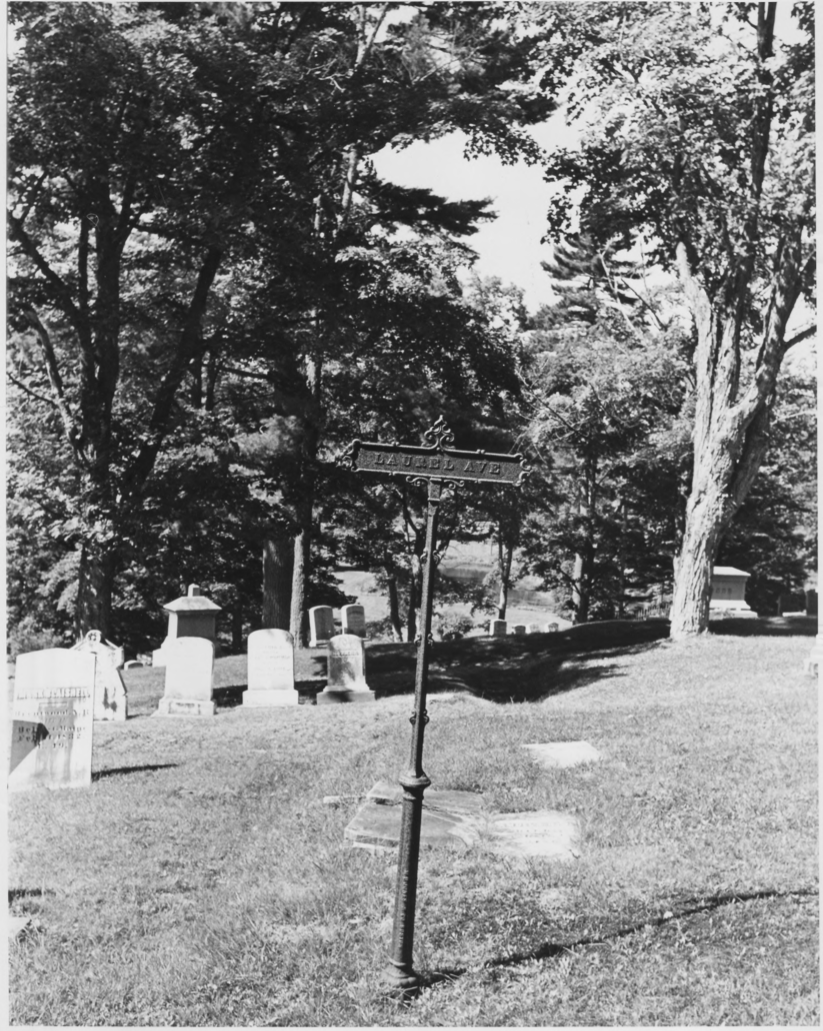 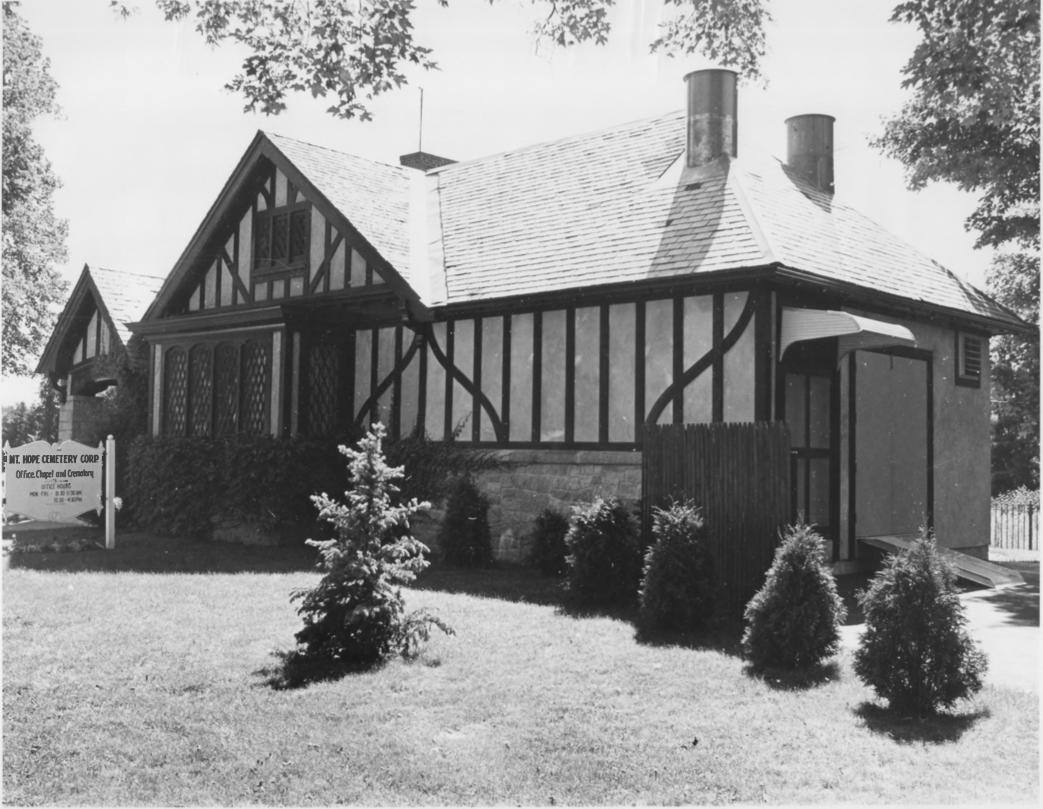 The Waiting Room of the Cemetery by Earle G. Shettleworth, Jr. on 8/20/74, Public Domain Photo Provided by NPS 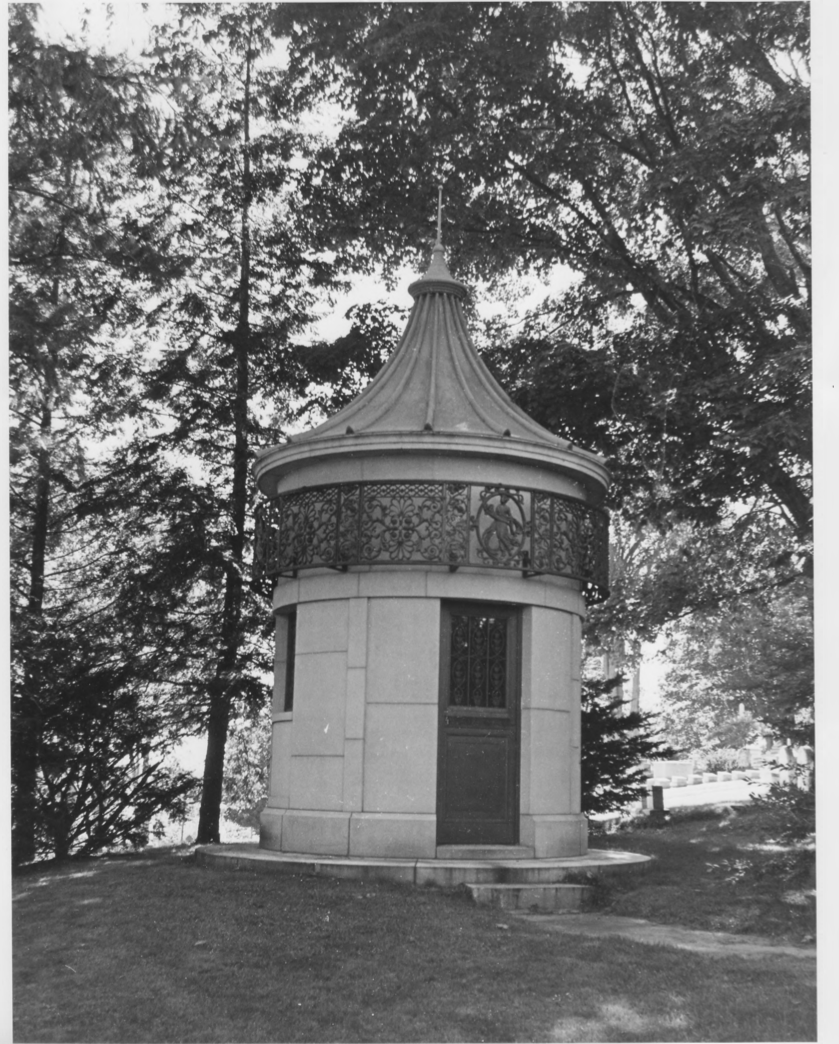 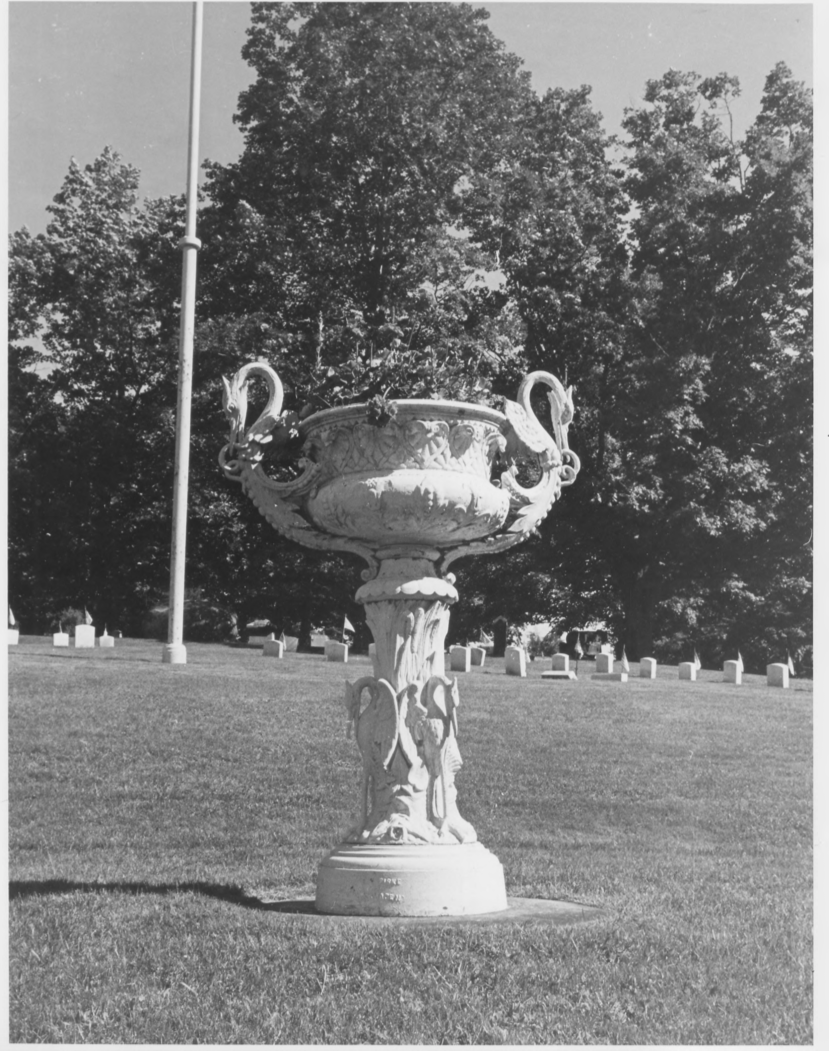 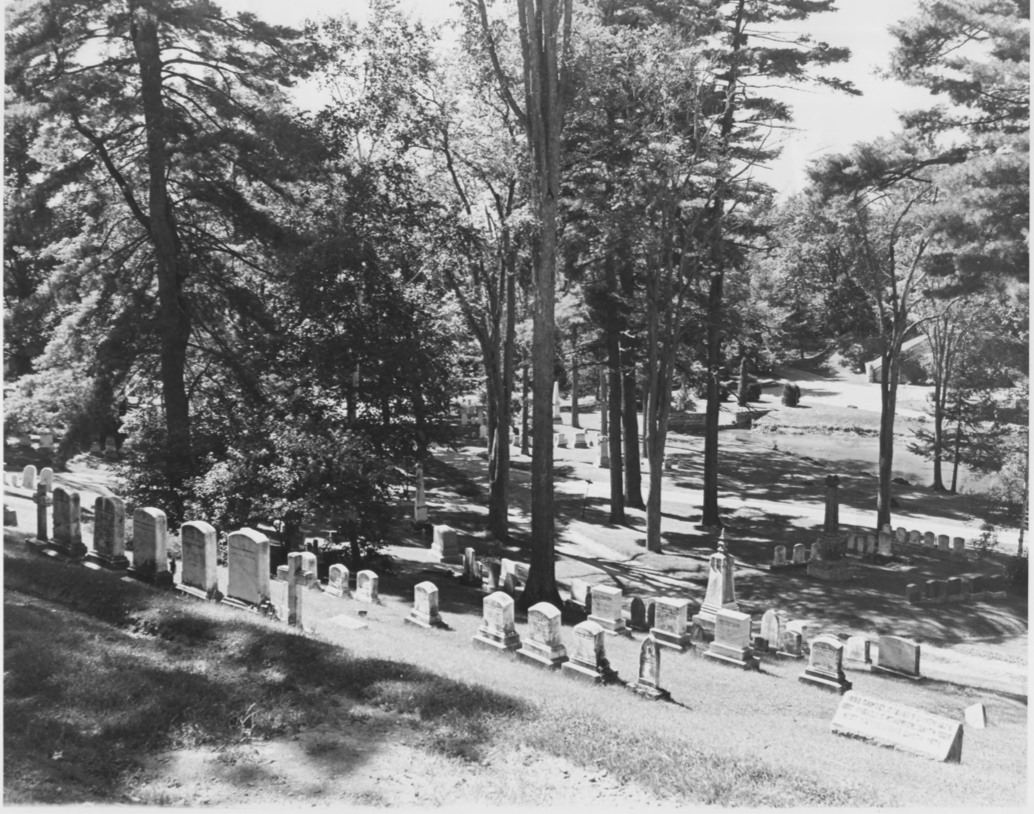 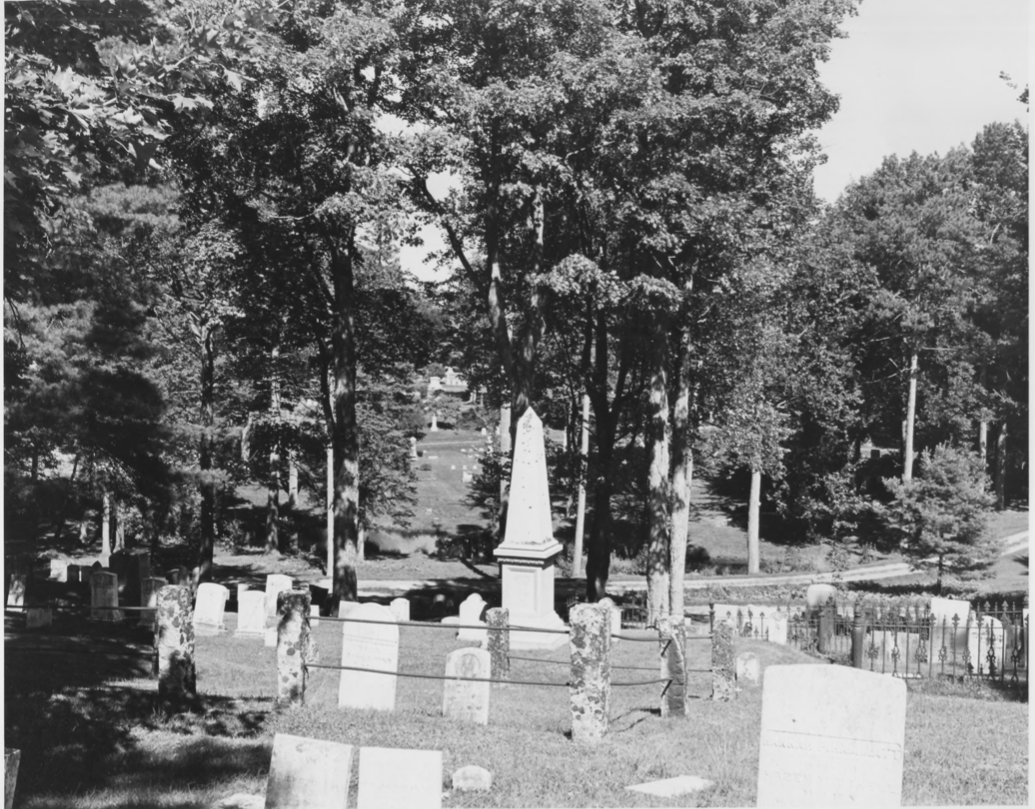 The Mt. Hope Cemetery is the second oldest garden cemetery in the nation, being the second example of a movement in cemetery design that would come to be known as the “rural cemetery movement.”  Previous to this movement, many cemeteries had been established within the confines of cities and towns, resulting in crowded and aesthetically barren burial grounds.  With the rise of romanticism in the mid-1800s, many city dwellers were growing weary of urban sprawl and hoped to create spaces for natural beauty and serene respite.  The rural cemetery movement created spaces that were, according to the National Park Service, “designed for the living as well as the dead.”

Styled after the first garden cemetery, Mount Auburn Cemetery in Cambridge, Massachusetts, Mount Hope was originally designed in such a way that the gardens and the burials were two separate sections of the cemetery.  The cemetery was designed by Bangor local Charles G. Bryant, whose architectural influence on Bangor during the 1800s was remarkably significant.

The cemetery contains a number of notable structures, which are heavily documented in historical sources.  Many of these are featured in photographs below.  The structures of note are as follows:

The Lodge serves as the offices of the cemetery.  It was constructed sometime around the year 1900 and was built in the English Half-Timbered style of architecture.

The General Samuel Veazie Tomb was commissioned by General Veazie himself after Mount Hope Cemetery opened.  General Veazie was the richest man in Eastern Maine throughout most of the 19th century, being an accomplished businessman with holdings all along the Penobscot River.  His tomb was constructed in the Greek Revival style of architecture and is one of only two below-ground tombs within the bounds of the cemetery.  The town of Veazie, which lies between Bangor and Orono along the Penobscot River, is his namesake.

This gravestone was placed in 1861 to mark the burial place of Fred E. Bradford.  It is one of the best-preserved gravestones from its era, having been crafted in the Victorian style.  The carving on the stone is particularly notable, depicting a symbolic story of death taking the life of one too early.  Bradford died at a young age and his parents commissioned the stone in his honor.

4.  The Family Plot on the Northern Slope of Mt. Hope

This family plot stands out from the rest of the cemetery because of its cast-iron fence which contains stylistic features from the Baroque and Rustic styles of design.  Interestingly, the fence also depicts a weeping willow, which is a Victorian symbol for death.

One of the few remaining cast-iron street signs that were placed in the park throughout the mid-1900s.

An imposing monument in the Victorian style, the Jonathan Eddy Monument was created to mark the burial plot of Jonathan Eddy, a recognized Bangor citizen whose family history stretched back to the Revolutionary War.  Jonathan Eddy’s grandfather was one of the first settlers in the Bangor area and was a colonel in the war against the British monarchy.

Rufus Dwinel was a lumber baron whose influence in the Bangor area is undisputed.  His monument, designed in the Victorian style, features a sandstone sarcophagus and impressive columnns.  Dwinel’s long-time home is still preserved in the Broadway Historic District near Downtown Bangor.

Erected in 1891, this monument marks the grave of Vice President, U.S. Senator, and Governor of Maine Hannibal Hamlin.  Hannibal Hamlin lived in Bangor for most of his life and was incredibly influential in the creation of the abolitionist Republican party following his groundbreaking exit from the then pro-slavery Democratic Party.  His political reputation in Washington, D.C. won him the respect of political allies and opponents alike.

The Grand Army Lot was created to house veterans of the Civil War.  This lot was created as a secondary burial place after the original soldiers’ lot became full during the war.  Contained within this lot is a cast iron urn of incredible craftsmanship, depicting herons both in its base and in its handles.

Built in 1905, the Waiting Room of Mount Hope Cemetery was designed to house visitors and parties awaiting the arrival of funeral processions.  There were originally two of these structures, identically crafted with iron balustrades and simply, but beautifully carved granite.  Only one now remains.

The Mount Hope Cemetery is, to this day, popular with locals as a place of rest and escape from the business of urban life.  Its long, meandering streets are often dotted with bikers, joggers, and strollers enjoying the deliberately natural beauty that surrounds them.