The Aull Center is located next to the Morgantown Public Library.

The Aull Center is located in the historic Garlow House, a decorative Queen Anne style house built in 1907. 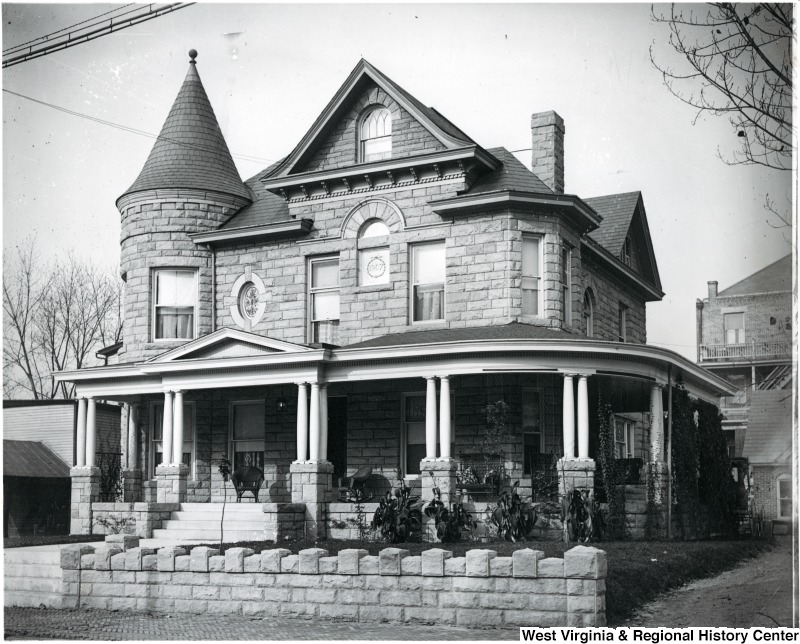 The Aull Center for Local History and Genealogy Research is located in the Garlow House, a Queen Anne Revival originally owned by Aaron J. Garlow, president of the Second National Bank and business investor in Morgantown. As a banker, Garlow was able to afford this upper-class house design and hire one of Morgantown's most renowned architects, Elmer Forrest Jacobs, to design it. The Queen Anne architectural style was popular at the turn of the twentieth century. The Garlow House boasts one of the Queen Anne's most identifiable features, a tall, rounded tower. It also has textured exterior walls, irregular roof shapes, varied window designs, and a rich appearance. The house's completion date, 1907, is still visible in the arc window. The Garlow family remained in the house until Aaron and Rebecca's granddaughter, Elizabeth Lewin, passed in 2000.

The Morgantown Public Library acquired funds from the William and Josephine Aull trust to purchase the house in 2000. The Aull Center opened in 2004 and holds the Library's non-circulating local history and genealogical collections on the first floor. Researchers enjoy a beautiful historic setting as they work. 99% of the house's woodwork is original and a painted glass window displays a classic Appalachian mountain scene in one room. The Aull Center also hosts forums, such as the Morgantown Area History Roundtable, and occasionally offers tours of the house.

The second floor of the building is home to two unique collections, the J. D. Rechter Holocaust Memorial Library and the Appalachian Prison Book Project. The Holocaust Memorial Library was established by Edith Levy, a Holocaust survivor from Vienna, Austria, who immigrated to the United States and settled in Morgantown. Levy had help from book dealer Ken Schoen, who also had family members in the Holocaust. The Library bears the name of Levy's father, who perished at Auschwitz. With more than 1,000 books on the Holocaust, the J. D. Rechter Holocaust Memorial Library is the largest collection of its kind in West Virginia. Also at the Aull Center is much of the Appalachian Prison Book Project (APBP) collection. Created by WVU English professor Katy Ryan in 2004, APBP is a nonprofit organization that has sent over 20,000 free books to incarcerated individuals in Appalachia.

At the Aull Center, history is not just part of a mission statement, but brought to life every day through research, education, and preservation.