Dedicated in 1923 in honor of local veterans who served in the armed forces during World War I, this monument features a bronze statue of Clio, the muse of history. Clio stands on top of a tall stone columnn that rises from a square pedestal. The selection of Clio reflects the memorial committee's desire to remember those who served in the war and reflect upon the lessons of history. The pedestal contains several bas-relief figures such as an eagle representing the United States and a "doughboy" representing an infantry soldier. The pedestal also includes a memorial plaque bearing eighteen names of Westfield men who lost their lives during the war.

The Westfield World War I Memorial was dedicated on November 11, 1923. The date is significant as it was the fifth anniversary of the armistice that led to the end of the war. 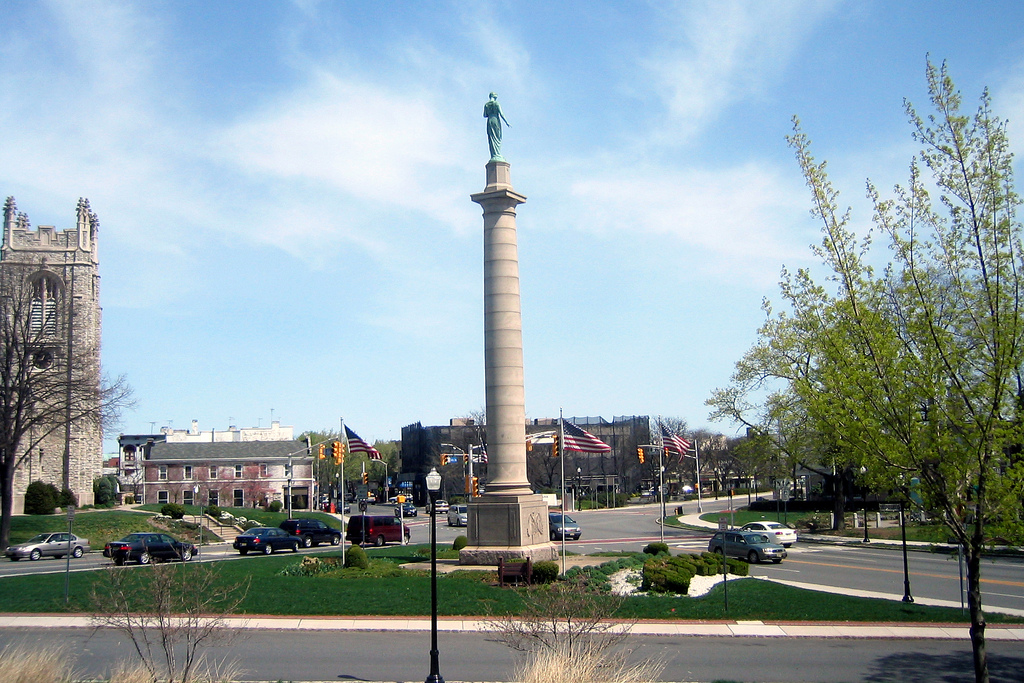 The monument was designed by sculptor Nathan Dumont Potter and dedicated on November 11, 1923, the fifth anniversary of the armistice that ended World War I. In addition to this monument, the city of Westfield passed an ordinance in 1920 honoring each of the eighteen men by naming a street in their honor. Known at the time as "Supreme Honor Men," the eighteen veterans are remembered today by the city's "Gold Star Streets" that bear their names and a star.

The memorial plaza includes monuments that honor local veterans of other conflicts, including the Spanish-American War, World War II, Korea, and Vietnam. In later years, the memorial plaza was expanded with the creation of a monument that honors Martin Luther King, Jr. and victims of the September 11, 2001, terrorist attack.The September 11th memorial consists of twelve granite pillars honoring the twelve Westfield residents who lost their lives in the terrorist attack.

War Memorial Dedicated by the Town of Westfield to the Memory of Her Sons Who Made the Supreme Sacrifice in the W.W.. Smithsonian Inventory of American Sculpture. Accessed August 30, 2017. https://siris-artinventories.si.edu/ipac20/ipac.jsp?&profile=ariall&source=~!siartinventories&uri=full=3100001~!338426~!0#focus.