Located along the Natchez Trace Parkway is the Bear Creek Mound and Village Site, which features a large Indian mound. Ancient peoples first occupied this site around 8,000 B.C., using it as a temporary encampment to butcher animal kills. Natives began practicing agriculture at the site between 1 and 100 A.D. The land was eventually used for modern farming, which reduced the size of the mound from plowing and agricultural use. The National Park Service acquired the property in 1965. After excavating the remnants of the site, the mound was restored to its estimated original height of 8 feet. 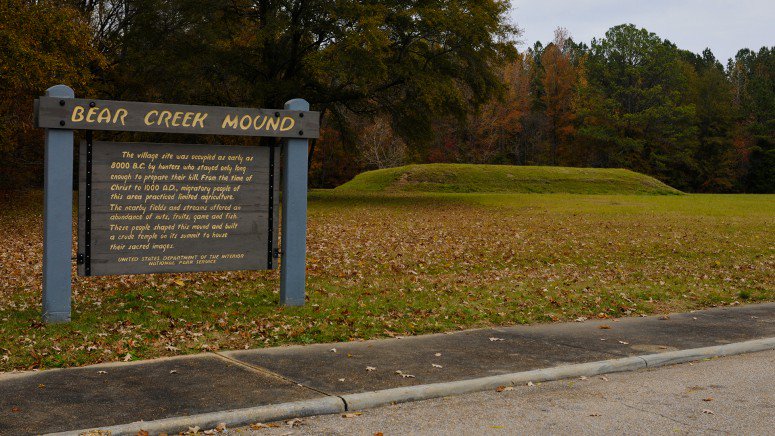 A closer picture of the Bear Creek Mound 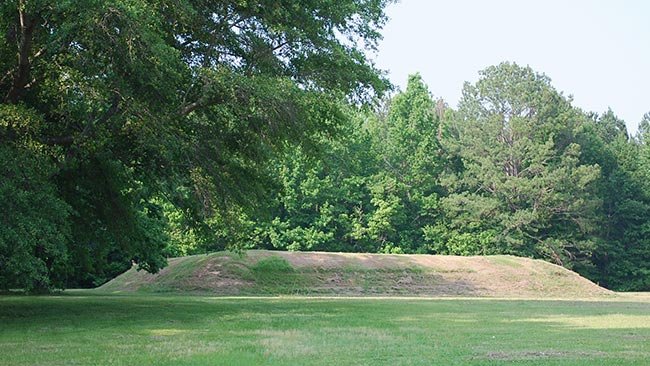 The Bear Creek Mound and Village Site is the location of a historic Indian mound that is an important archaeological site today. The site of the village is believed to have been used as early as 8000 B.C., while the mound was constructed between 1100 and 1300 A.D., during the Mississippian period. Natives of the site began practicing limited forms of agriculture during the first century A.D. The mound itself was constructed in different stages and is believed to have been used for ceremonial purposes or residential use for those of higher status.

The National Park Service managed to acquire the property in 1965, and excavations were started soon after. The excavations revealed remnants of structural materials, specifically burned daub, a type of mud plaster. Burned daub was used in building construction at the time the mound was built, so its presence indicates that a building was present on top of the mound, likely a temple or the house of a chief.

Before the National Park Service acquired the property, it was used as agricultural land by modern day farmers. Some of the farmers actually lowered the mound to make it more suitable for farming. The plowing of the field and the mound area lowered the height of the mound significantly from its original 8 feet. When the National Park Service got the property of the mound and village site, the site was so reduced in height that it had to be repaired. After the excavations of the site were completed, the mound was rebuilt to what is presumed to have been its original height of eight feet. Today the mound dimensions are 8 feet in height by 85 feet across the base of the mound.

Open from sunset to sundown