The Bangor Theological Seminary in Bangor, Maine is one of the oldest Christian education facilities in the entirety of the United States, ranking within the top five oldest of such institutions in the country. When the Seminary was founded in 1811, it was the only post-secondary educational institution in northern New England besides Maine’s Bowdoin College. While the organization was founded in Portland, the Seminary itself was located in Bangor, between Union Street and Hammond Street. The buildings that made up the Seminary have been well preserved, and are still used in various capacities to this day, with the old buildings of learning being an iconic sight for locals. The Bangor Theological Seminary Historic District is comprised of these buildings, which once together made up the campus. 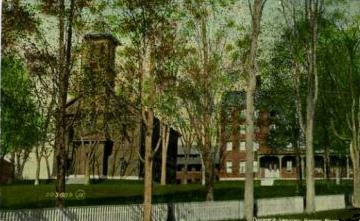 The Bangor Theological Seminary as pictured in an engraving that was published in December of 1853 in "Gleason's Pictorial Drawing-Room Companion." Public domain photograph provided by Wikimedia Commons. 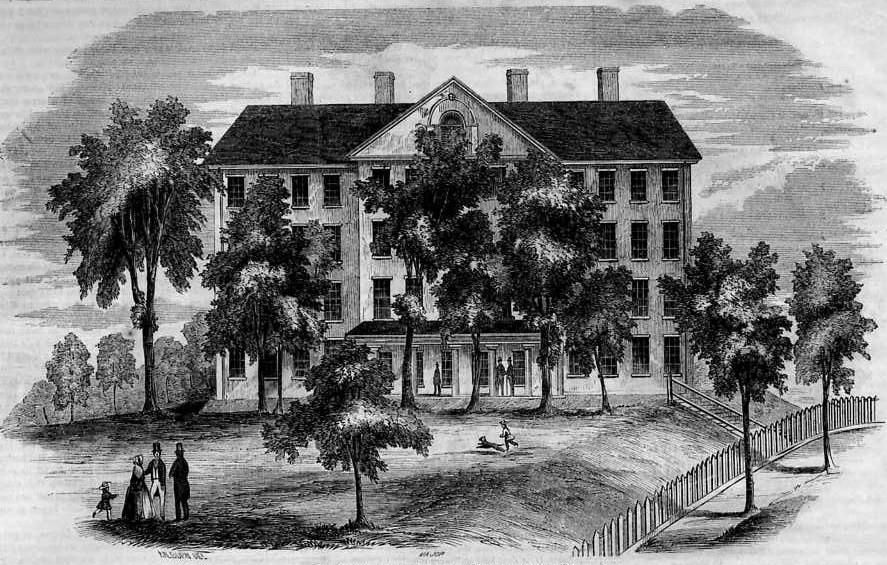 The Bangor Theological Seminary was originally known as the Maine Charity School and was located in the Province of Maine, a section of Massachusetts that had not yet been formed into a state of its own.  The organization behind the Seminary was founded in Portland, Maine, and set up a temporary teaching location in Hampden, Maine.  The first graduating class passed through the Seminary’s halls in 1820, just one year after they moved to the historic Union Street location.

It was the leadership of Reverend Enoch Pond that defined the Bangor Theological Seminary throughout the mid- to late 1800s.  Reverend Pond came to the Seminary in 1833 to preside over the school.  He would hold this position for approximately 50 years.  During that time, the Seminary became a cornerstone of Bangor, sitting just north of the downtown districts.  As of 1977, there were approximately 650 Christian educators who had been trained at the Bangor Theological Seminary serving across the world.

There are seven notable buildings that have been preserved within the district.  Their descriptions and relevance are as follows:

The Old Commons is the oldest building still standing on the grounds of the Bangor Theological Seminary.  Only one building pre-dates it: a chapel built in 1824 which was lost to fire in 1829.  The Old Commons is built in a simplistic style based off of the Federal style of architecture.  During its time, it served as a dormitory for students as well as a faculty residence.

Another building in the Federal style, Maine Hall is a nearly unaltered dormitory hall designed by Charles H. Pond.  The building was given the name “Maine Hall” because its construction was almost entirely funded by donations from Maine churches who supported the Seminary.

Constructed at some point between 1858 and 1859, the chapel of the Bangor Theological Seminary is of Italianate styling.  Largely funded by the “Ladies of Maine” (as recorded in NPS NRHP documentation,) the chapel cost nearly $12,000 dollars at the time to construct.  The chapel is easily recognizable by its tall tower.  It was designed originally by William G. Morse and constructed by Joseph W. Humphrey, each well respected in their own right in the city of Bangor.  The exterior has been excellently preserved, but the interior has undergone significant remodeling over years of use.

A Queen Anne style residence designed with a unique hybrid of clapboard exterior and shingled exterior by Wilfred E. Mansur.

One of the latest structures to be constructed in the Seminary District, the Gymnasium was designed by the same architect as the Professor Denio House, Wilfred E. Mansur.  The Gymnasium is also unique in that it is the only Romanesque Revival styled building in the entire district.  Its unique brickwork makes it stand out among the other buildings of the campus.

About Us. The BTS Center. Accessed August 26, 2017. http://www.thebtscenter.org/about/. Official Website for the Organization That Ran the Seminary