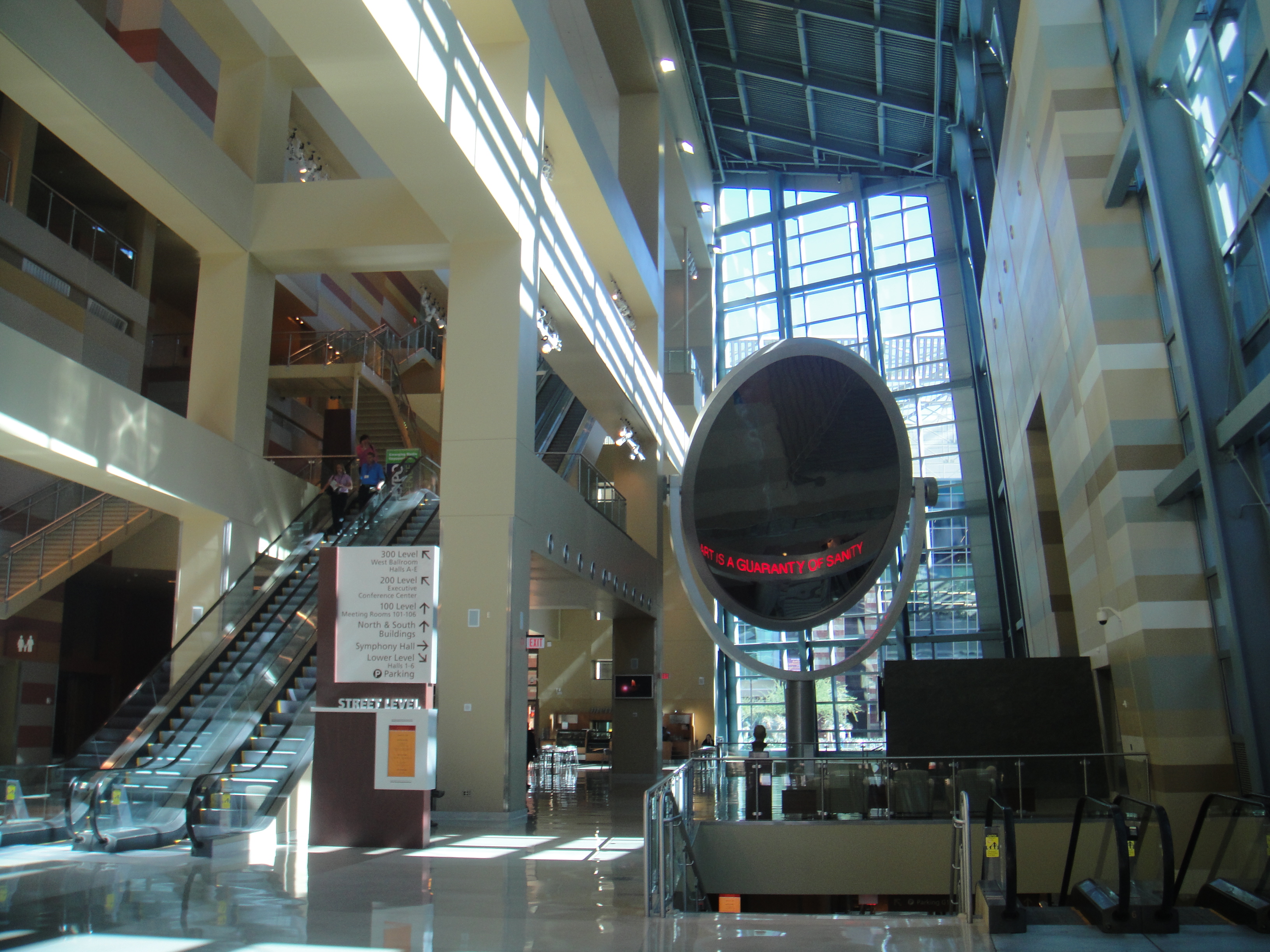 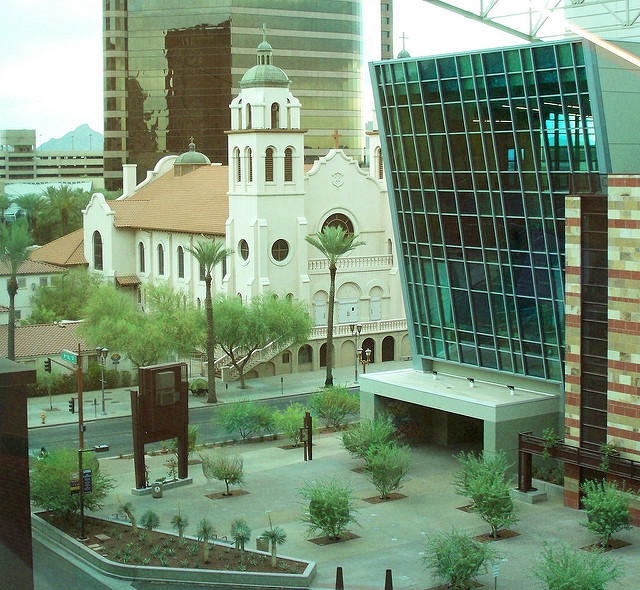 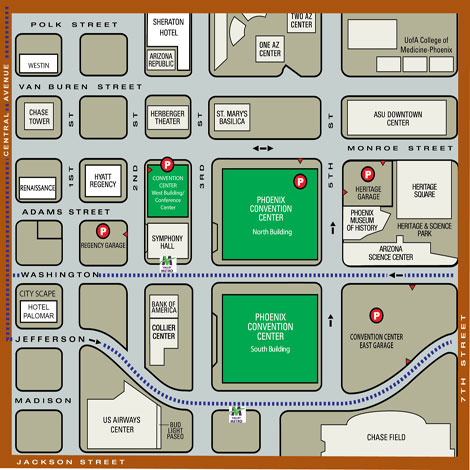 The art projects are funded through the City's Public Art Program. The program, established in 1986, has involved artists in the design of every kind of city building and space, ranging from streetscapes, freeway overpasses and pedestrian bridges, to canal trails, parks and libraries. The Phoenix Public Art Program is managed by the Phoenix Office of Arts and Culture and has commissioned more than 120 public art projects.
Artist Selection Process:

As part of the Phoenix Convention Center expansion in the early 2000s, 10 artists were selected to create pieces for the West and North Buildings. The artwork was installed in both phases of construction, with a majority of pieces being installed in Phase Two.(2008) (Phase One opened in 2006.) The following pieces were created for this new Phoenix Convention Center expansion.

"Art is Guaranty of Sanity," Louise Bourgeois - A monumental, 90-foot mirror sculpture, located in the West Building atrium. The mirror face is highly polished steel, cut into shapes derived from a drawing of a spider web – a recurring theme in much of the artist’s work. Visitors will see themselves and the atrium space dynamically reflected in the mirror’s surface. The mirror also reflects one of Bourgeois’s hallmark phrases, which also serves as the title for the piece: “Art is Guaranty of Sanity.” The sculpture was engineered and fabricated by Caid Industries, in Tucson.

The back of the mirror is scalloped ridges of polished metal. The entire mirror is supported by a large steel stem that rises from the lower level food court of the convention center.
Ms. Bourgeois, widely recognized as one of the world's foremost living sculptors, explored several of her lifelong themes in creating the signature sculpture for the Phoenix Convention Center. The spider-web pattern on the face of the mirror gives viewers constantly changing views of themselves and the atrium.

Bourgeois was awarded the National Medal of the Arts, the nation’s highest honor for visual arts, by President Clinton in 1997. Bourgeois was born in France in 1911 and moved in 1938 to New York. She passed away in May, 2010. (4)

“Night Blooming Garden,” Beliz Brother – One hundred forty-four blue and green LED runway lights arranged in arcs along the sidewalks around the Phoenix Convention Center campus. The lights are designed to replicate a night-blooming cereus plant of the Sonoran Desert and gently influence pedestrian movement surrounding the Convention Center facilities.

“Social Invertebrates”, Tom Otterness – Three large, whimsical bronze sculptures of desert creatures, enlarged to human scale. The creatures include a millipede with a hat and shoes; a walking stick in high heels, and a scorpion holding two small men in top hats tugging at a bag of money. Accompanying sculptural elements of people, scaled down to Lilliputian dimensions, interact with the creatures. The sculptures are set in a unique water-harvesting garden at the public plaza located near the southeast entrance of the North Building.

“Southern Exposure,” Jamex and Einar de la Torre – Two large-scale sentry figures, inspired by the columnnar figures at Tula, Mexico. They are constructed of metal, plate glass, blown glass and resin. The stacked glass boxes that make up with the figures contain blown glass objects, found objects and cultural artifacts reflecting the ancient and contemporary cultures of Arizona and the Southwest.

“Halo,” William Bennie and Kim Cridler – A wreath-like metal sculpture suspended over the Monroe Street ballroom entry. The sculpture employs a conical ring of interwoven agave leaves, framed and supported by a grid-like structure. The form references the multiple meanings of a wreath as denoting good luck; transformation through regeneration, like the Phoenix itself; and the ring of continuity, life, and cyclic time.

“A Moment at the Narrows,” Troy Moody – Water and landscape-inspired terrazzo flooring designs featured at two locations along the corridor inside the Washington Street side of the North Building. The designs are inspired by the topography of Arizona and the fragmented profiles of the Grand Canyon cliff face, which follow the irregular contours of the stone up to the vast blue sky.

“Arizona Beach,” Hirotsune Tashima – A series of humorous stoneware ceramic sculptures, intended to point to the power of growth and to encourage people to live fully. Located in the food court area inside the North Building, the playful group of sculptures mixes native flora and fauna and contemporary cultural references with the idea of a desert “beach.”

“The Earth Dreaming,” Isaiah Zagar – A colorful mosaic of tile murals at the Third Street and Monroe Street entrance which creates Phoenix and Arizona-specific imagery within the mural. (1)