Christ of the Ozarks

Dedicated in 1966, this 65-foot statue was created by artists Emmett Sullivan and Adrian Forette. 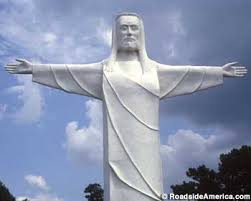 The Christ of Ozarks began as part of a larger plan for a Biblical theme park by Gerald L. K. Smith, a controversial figure in his time who opposed Franklin Delano Roosevelt's decision to enter the war against Germany. Today, Gerald L. K. Smith is buried at the foot of this statue.