The 83rd Precinct Police Station and Stable was built between 1894 and 1895 to house the police department for the Bushwick area in Brooklyn, New York. The building was designed by William Tubby in a Romanesque Revival style of architecture. This Precinct was originally called the 20th, but it was renamed the 83rd in 1929. The building remained with the 83rd until they found a new home on Knickerbocker Avenue in 1983. Today, the building is used by the Brooklyn North Task Force. In 1977, the 83rd Precinct was named a landmark, and it was placed on the National Register of Historic Places in 1982. 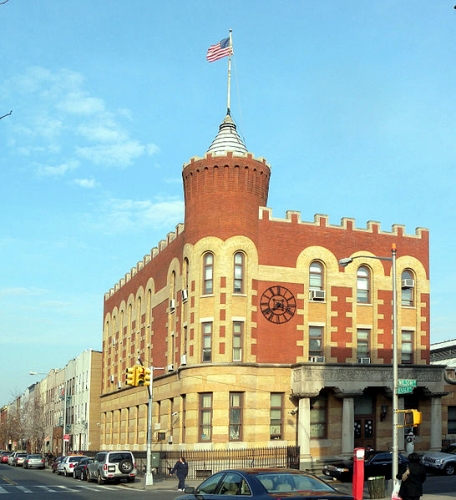 Back View of Building 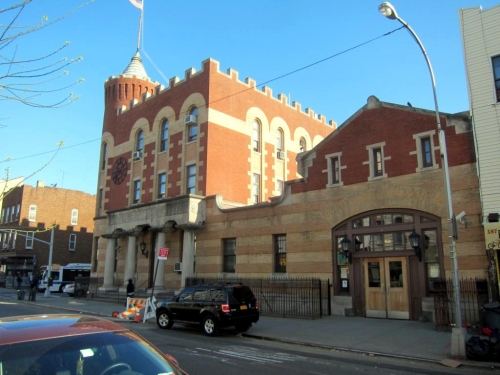 Completed in 1895, the 83rd Precinct Police Station and Stable sits on the corner of Dekalb and Wilson Avenue. The architect, William Tubby, was well known in Brooklyn during the late-19th century. His other designs included the Charles Pratt House, the Pratt Library, and the Wallabout Market buildings. Evident by the name of many of his buildings, Tubby was one of the main architects for Charles Pratt, who was a wealthy oil distributor.

The 83rd Precinct, originally the 20th, was built in Bushwick, a neighborhood of Brooklyn. The neighborhood was known for heavy crime and poverty after a population increase following the Civil War. To intimidate these criminals, the 83rd Precinct was designed in a Romanesque Revival style, which gave it a fortress-like presence. The building was constructed with different colored bricks, including red, yellow and ochre. A corner tower and clock peered over the neighborhood, making the building much more intimidating. At the entrance, the portico was supported by four columnns. The building was also connected to a stable by a cell block wing. All of these features made the 83rd Precinct a castle inside a city neighborhood.

The Precinct was named the 20th Precinct for many years. In 1929, it became the 83rd Precinct. However, the 83rd was moved to 480 Knickerbocker Avenue in 1983. Luckily, the building was not torn down like many of the other police precincts built around the same time. Eventually, the Brooklyn North Task Force called it home, and they are still located there today. The building received landmark status in 1977, and it was listed on the National Register of Historic Places in 1982.