The City Cemetery of Sacramento is nearly as old as the city itself, and encapsulates much of the city's history. The cemetery dates to 1849 and is the final resting place of many of the city's leading citizens as well as city and state leaders. It is the oldest existing cemetery in Sacramento.

A view of the cemetery 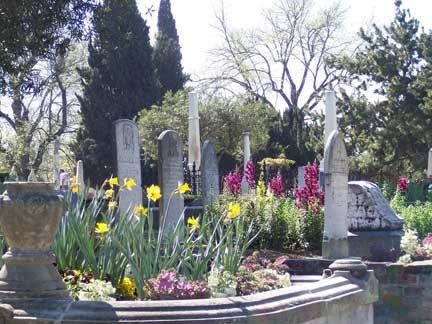 The City Cemetery of Sacramento began in 1849 with a donation of 10 acres from city founder John Sutter. It was designed to be a Victorian garden cemetery, a style which was popular at the time. Because the cemetery's history parallels that of Sacramento, visitors there can find the graves of everyone from Gold Rush migrants to governors. It is the largest public cemetery in the state.

Among the noteworthy graves in the cemetery is a mass plot devoted to the cholera outbreak of 1850. The plot holds the remains of approximately 600 victims of the epidemic. John Sutter, Jr., founder of Sacramento, is also buried in the cemetery. Numerous other state politicians and Supreme Court justices are buried there as well.

In addition to its well-known residents, the cemetery is also known for its roses. The rose garden was established in 1992, with approximately two percent of the garden made up of species from the Victorian era. The cemetery's roses are considered to be some of the finest in California.

The cemetery was declared a State Historic Landmark in 1957 and was added to the National Register of Historic Places in 2014.