One of several visitor centers of the vast Yosemite National Park, the Yosemite Valley Visitor Center features exhibits about the natural and cultural history of the park. It is next to the Yosemite Museum, a historic building designed by National Park architect Herbert Maier and constructed between 1923 and 1925. The museum became the first museum in the National Park Service and remains one of the oldest buildings in the area. It offers exhibits about the history of Yosemite Valley and the Park Service, as well as Native Americans who were the sole human inhabitants of the Yosemite Valley until 1849. The acquisition of priceless Native American artifacts inspired the design of the building, with a "fireproof" concrete base that could protect the artifacts on the museum's first floor in the case of a fire. 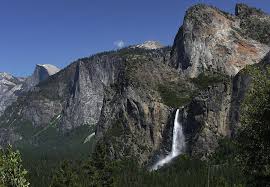 Yosemite Valley sees the majority of visitors to the park. 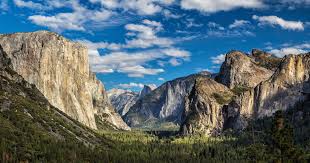 The museum became the first in the National Park Service when it opened on May 29, 1926 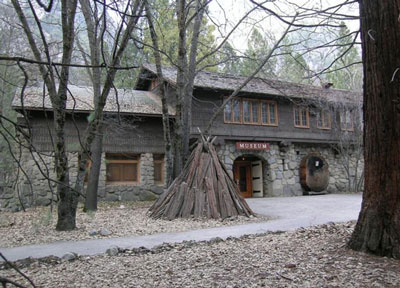 "Yosemite: The Embattled Wilderness," by Alfred Runte (see link below) 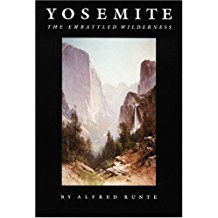 Yosemite National Park is one of the country's most iconic and beautiful landscapes. It is best known for its ancient sequoia trees, waterfalls, and the granite cliffs of El Capitan and Half Dome. Congress established the park in 1890 and it attracts millions of visitors each year. It encompasses an area over 1,100 square miles, most of which is wilderness. The majority of visitors go to the Yosemite Valley, which is 7.5 miles long and features Yosemite Falls, the tallest waterfall in North America, and the aforementioned famous cliffs.

Until 1849, Native Americans were the main residents of the Yosemite Valley, located in California’s Sierra Nevada mountain range. The gold rush brought thousands of miners and settlers to the region, and conservation-minded citizens united with advocates of hunting and outdoor recreation to preserve the Valley’s ecosystem. Conservationists convinced President Abraham Lincoln to declare Yosemite Valley a public trust of California in 1864. This marked the first time the U.S. government protected land for public enjoyment and laid the foundation for the establishment of the national and state park systems.

In the late 1880s, John Muir drew the public's attention to the destruction of the Valley's vast meadows by sheep grazing and the continued danger of the Valley posed by the logging industry. Muir and Robert Underwood Johnson, a fellow environmentalist and influential magazine editor, worked to convince Congress to save 1,500 square miles of land. These lands would later become Yosemite National Park, America’s third national park. In 1906, the state-controlled Yosemite Valley came under federal jurisdiction with the rest of the park.

In 1890, Congress approved legislation creating Yosemite National Park and the bill was signed into law by President Benjamin Harrison. The park is best known for the Half Dome and giant sequoia trees. Environmental trailblazer John and his colleagues campaigned for the congressional action.