As part of the Ancarrow’s Landing portion of the park, the Manchester Slave Dock historical marker was dedicated as part of a history project by faculty and students at St. Catherine’s Middle School. This popular fishing spot is also part of the Richmond Slave Trail which commemorates the history of slavery by allowing hikers to reflect on the journey many slaves walked from the river port to the slave pens where they were separated and sold in the 18th and early 19th century. As slavery spread west, many Virginia slaves marched this trail in reverse, walking from slave pens in the city to the river where they were transported to slave markets in cities like New Orleans. The trail starts underneath a wide bridge covering the James River. Surrounded by concrete pillars, this path, three miles long and recently restored, follows the path of the old Manchester Canal where many slaves were trafficked to and from ships.

This small marker was part of a local history project by St. Catherine’s Middle School. 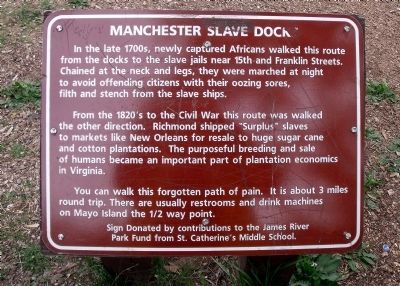 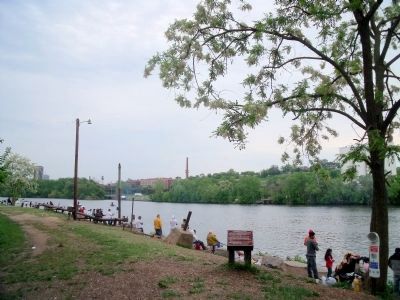 Hikers can walk the same path that slaves tread to and from the river. 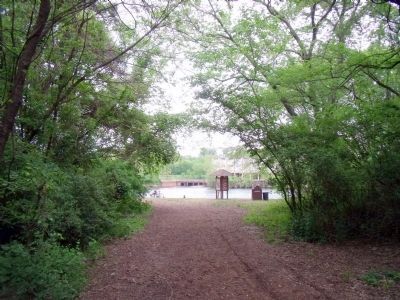 Located in the Ancarrow’s Landing section of the James River Park, the Manchester Slave Docks were a pathway to transport slaves from the late 1700’s all the way until the Civil War. Until the 1820’s, slaves were taken on the path to slave jails.Chained at the neck and legs, they were moved at night so that they wouldn’t offend citizens. Often badly beaten, the slaves had “oozing sores,” were filthy and carried a stench from the slave ships. From the 1820’s until the civil war, slaves walked the path in the opposite direction, back towards the docks.

“Surplus” slaves were shipped out from the port for resale. Often to places like New Orleans where there were very large sugar cane and cotton plantations after tobacco “hit a slump.” This was the cornerstone of the marketplace in Richmond and the state as well. At this time in Virginia, deliberate sale and breeding of people was essential for the plantation economy in place. “By 1859 half a million slaves had been sold from Virginia to the Deep South, with more in 1854 than any other year, as many as 10,000 a month.”

Coming across the bridge of Interstate 95, which covers the trail, back down to Hull Street you can go on to drive across Mayo Bridge to the Kanawha Canal. This canal was built in the late 18th century, mostly by slave labor. It was restored in 1999 and reopened. Built in order to ship slaves, it also became a way for slaves to escape to freedom. On this canal, there stands a 2’x3’ box to commemorate Henry “Box” Brown who escaped to Philadelphia with the help of a shoemaker, who was later arrested while trying to help two other slaves escape, and became an activist for anti-slavery. The box is representative of the box he escaped in which was of the same size.