Logan (also known as Tah-gah-jute) was a Cayuga and Mingo leader in the Ohio Valley in the 1770s. A well-known orator, Logan advocated for peaceful relations with encroaching white settlers. His pacific outlook was changed in the spring of 1774, when a party of white settlers massacred eight Indians at Baker's Tavern across from Yellow Creek. Among the dead were several members of Logan's family. The state highway marker here acknowledges this infamous episode. In response to his family's murder, Logan began a series of retributive raids against white frontier settlements, which helped ignite a wider Native-settler conflict known as Lord Dunmore's War. The Native Americans were defeated at the Battle of Point Pleasant in October 1774. Following the conflict, Logan gave a famous speech mourning his loss known as "Logan's Lament." Logan died in 1780.

Historical Marker that denotes what occurred at the Logan Massacre. 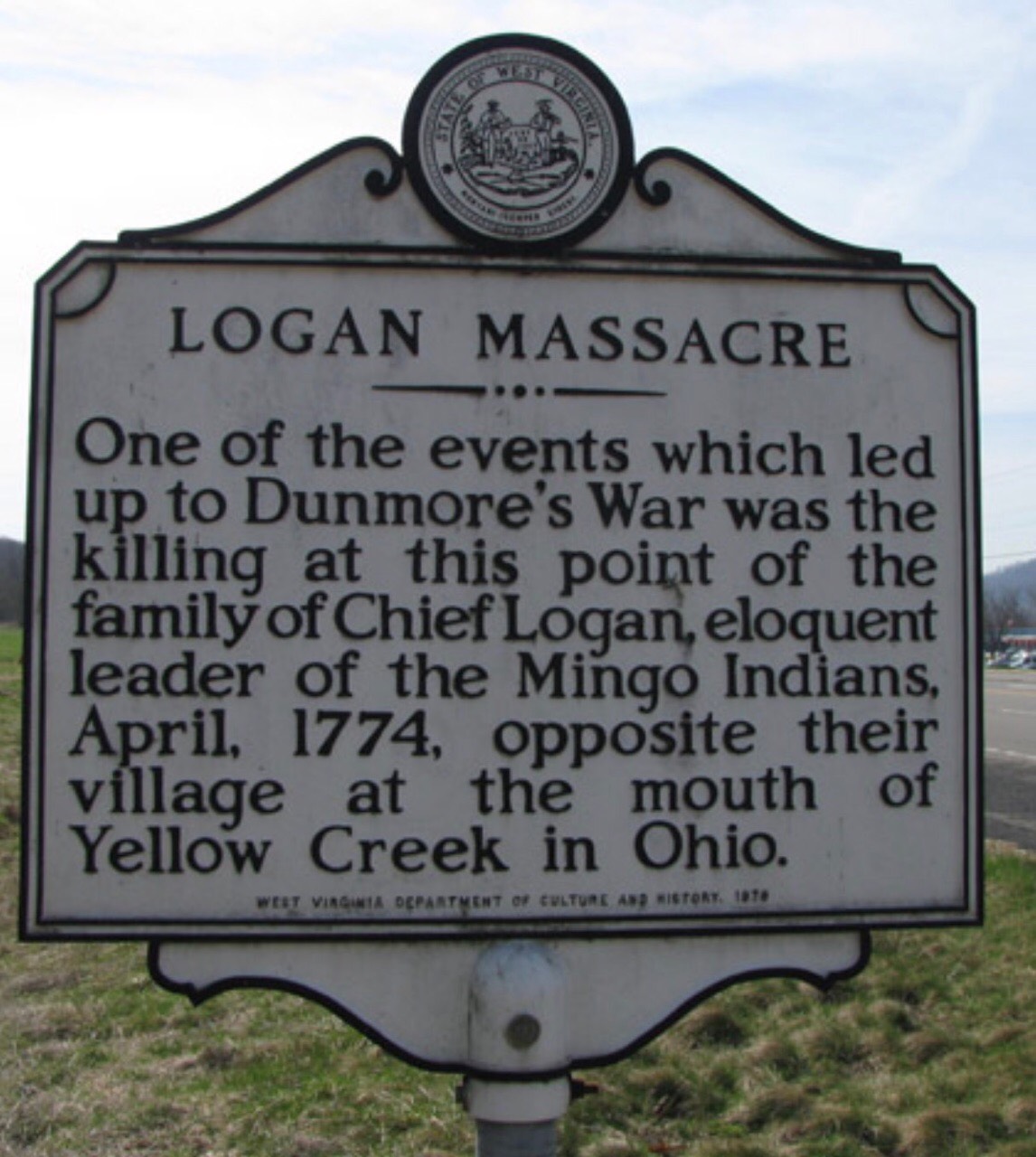 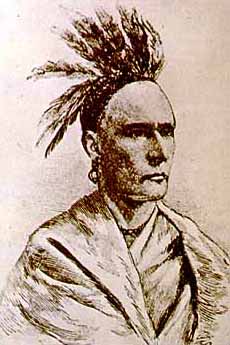 Between 1773-1774, relations between Native Americans and white settlers along the Ohio River frontier stood at a precipice. Simmering tensions over white excursions west of the Ohio River and occasional attacks and killings led many to believe that a war between the Indians and settlers was inevitable. There were, however, voices of reason on both sides.

Among Native Americans, Logan (also known as Tah-gah-jute) emerged as an advocate for peaceful relations with white settlers. The son of Oneida Chief Shikellamy, Logan served as Chief of the Cayuga and was a well-known orator (the Onedia and Cayuga both belonged to the Iroquois Confederacy). Around 1770, Logan moved into the Ohio River Valley along Yellow Creek, near modern Hancock County, West Virginia. Chief Logan joined the Mingos, a tribal confederation composed of Ohio Valley Iroquois and other displaced Indian groups. Logan counseled peace with white settlers; Logan himself even noted "my countrymen pointed as they passed, and said, Logan is the friend of white men."[6]

Among white settlers (referred to as Long Knives by Indians), many coveted lands beyond the Ohio. In the spring of 1774, a large party of perhaps 100 Virginians and Pennsylvanians intended to move into Kentucky to found a new settlement. In order to reach their intended settlement, the settlers contemplated attacked an Indian village long the way. Fearing their actions would provoke a wider war, local leader and experienced frontiersmen Michael Cresap helped convince the settlers not to attack.

Despite the efforts of Logan, Cresap, and others, violence nevertheless erupted. On April 30, a party of eight Indians, including several of Logan's family members, crossed the Ohio River and arrived at Baker's Tavern (in present West Virginia). Baker's Tavern routinely served as a trading post, and the Indian party's intent seemed peaceful (included in the party were women and a newborn child). Yet also waiting near Baker's Tavern was a party of white settlers led by Daniel Greathouse. Greathouse had already contemplated attacking the Mingos across the river. With the arrival of a Mingo party at Baker's Tavern, Greathouse apparently saw an opportunity to strike.

Accounts differ somewhat as to what exactly happened. Greathouse and his white confederates apparently offered the Indians rum and got them drunk. After a period of drinking together, Greathouse and his men then massacred the entire Indian party. Among the dead were Logan's brother and sister. Only a Mingo baby was spared. Having slaughtered the Indians, Greathouse and his men fled east to Washington, Pennsylvania. The affair has been variously called the "Greathouse Party Massacre," "Yellow Creek Massacre," and "Logan's Massacre." George Rogers Clark, recalling the event, confessed "it was viewed as a horrid Murder by the whole Country."[9]

The slaughter of the party and the loss of his family enraged the once peaceful Logan. Due to Michael Cresap's status as a colonial leader, Logan assumed he was responsible for the massacre. Logan sought revenge, vowing to claim ten white lives for each of his family members murdered. Using a white prisoner to transcribe, Logan sent a message to Cresap directly in July:

"What did you kill my people on Yellow Creek for...You killed my kin again on Yellow Creek, and took [my cousin] prisoner then I thought I must kill too; and I have been three time[s to war since then] the Indians is not Angry only myself."[7]

Throughout the summer, Logan struck at white settlers along the frontier, apparently claiming 30 scalps in revenge. The Greathouse Party Massacre and Logan's subsequent retaliatory strikes ignited the simmering tensions between whites and Native Americans. Soon, Shawnees, Delawares, and other tribes began attacking white settlements, plunging the Virginia and Pennsylvania backcountry into a conflict known as Lord Dunmore's War (named after the Virginia governor). The Native tribes were defeated the Battle of Point Pleasant in October 1774. Peace was negotiated with the Treaty of Camp Charlotte, which set the Ohio River as the boundary between Indians and whites. Logan refused to attend these talks. When white leaders inquired about Logan, an Indian replied that Logan "was like a Mad Dog, that his Bristles had been up and were not yet quite fallen."[9] Logan ultimately responded to Lord Dunmore in a speech known as "Logan's Lament":

"I appeal to any white man to say, if ever he entered Logan's cabin hungry, and he gave him not meat; if ever he came cold and naked, and he clothed him not. During the course of the last long and bloody war, Logan remained idle in his cabin, an advocate for peace. Such was my love for the whites, that my countrymen pointed as they passed, and said, Logan is the friend of white men. I had even thought to have lived with you, but for the injuries of one man. Col. Cresap, the last spring, in cold blood, and unprovoked, murdered all the relations of Logan, not sparing even my women and children. There runs not a drop of my blood in the veins of any living creature. This called on me for revenge. I have sought it: I have killed many: I have fully glutted my vengeance. For my country, I rejoice at the beams of peace. But do not harbour a thought that mine is the joy of fear. Logan never felt fear. He will not turn on his heel to save his life. Who is there to mourn for Logan? Not one."[6]

Logan continued to oppose whites' expansion westward, fighting for the British during the American Revolution. He struggled deeply with the death of his family and took to alcohol routinely. In a dark irony, he was apparently killed in a family feud in 1780. Logan's sad tale remained well-remembered for many years. Besides this highway marker acknowledging the marker, both the town and county of Logan in West Virginia are named for the Indian leader.