The cemetery at Mount Vernon Baptist Church includes the final resting place of Lena Baker, an African American woman who worked as a domestic laborer and was executed in 1945 for the murder of her employer Ernest B. Knight. In 2005, Baker was granted a posthumous pardon in recognition of the harrowing conditions she faced which led her to kill Knight in self-defense. Kight was a gristmill worker who had hired Baker to take care of him as he recovered from an injury. Baker maintained her innocence throughout the entirety of the trial, but was found guilty and sentenced to death. Her execution occurred on March 05, 1945 via electrocution in the chair nicknamed “Old Sparky” at the Georgia State Prison. Ms. Baker was buried in the far back corner of the cemetery and given a small grave marker. Baker was the only woman to ever be executed via electrocution in Georgia.

This is the mugshot taken of Lena Baker at Georgia State Prison on February 23, 1945. 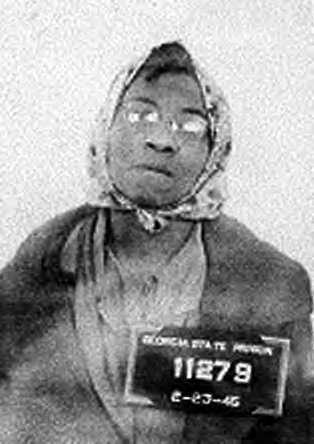 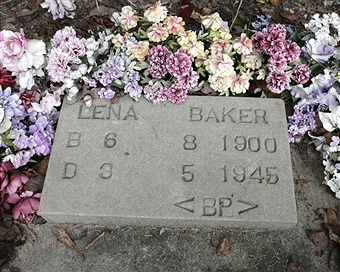 This is an image of the new headstone. 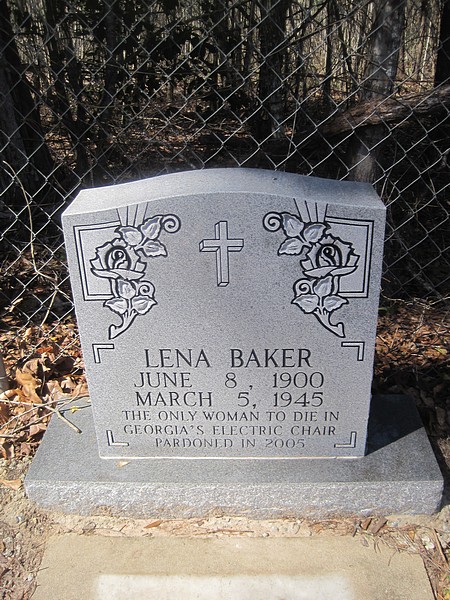 Lena Baker was initially hired by Ernest B. Knight to care for him as he recuperated from a broken leg. After some time as his employee, the two became intimate at times but the relationship was never equal in power or agency. Knight worked at a gristmill, and Baker claimed that there would be many an occasion in which Knight would take her to the mill, but would not allow her to leave for days at a time. She recalled that he would trap her inside the building and leave for things like church or other responsibilities before returning to her.

On one particular occasion, Baker claimed that Knight forcibly took her to the gristmill and refused to let her leave by locking her inside the building before leaving to attend his worship services. Upon returning, she noticed that he had with him an iron bar that had been used to keep the doors closed. The two had been arguing because she was very insistent on returning home, and at that moment, according to the testimony at her trial, she became fearful for her life. According to Baker’s testimony, Knight threatened to shoot her if she tried to leave. She tried to force her way past him and his iron rod and used his gun to shoot Baker in the head. On April 29, 1944, Baker went to the coroner and admitted to killing Knight.

After a trial that lasted only one day, an all-white jury ruled that Lena Baker was guilty of the murder and the judge sentenced her to death by electrocution. The governor allowed her a sixty-day appeal period, but the sentence remained unchanged, and clemency was denied. Baker was booked at the Georgia State Prison in Reidsville on February 23rd, 1945, and executed on March 5th of the same year. Her last words were, “What I done, I did in self-defense, or I would have been killed myself. Where I was I could not overcome it. God has forgiven me. I have nothing against anyone. I picked cotton for Mr. Pritchett, and he has been good to me. I am ready to go. I am one in the number. I am ready to meet my God. I have a very strong conscience” (Phillips).

Baker was buried behind the Mount Vernon Baptist Church in Cuthbert, Georgia. In 2005, Baker was fully posthumously pardoned and a newer headstone was given to her thanks to renewed interest in her case.