Originally known as Mount Morris Park, the Harlem park was renamed in 1973 by the City Council in honor of the black nationalist leader Marcus Garvey. Marcus Garvey was one of the most influential African Americans of the early 20th century and the founder of the United Negro Improvement Association (UNIA) in 1914. The UNIA supported the idea of black communities creating cooperative businesses and organizations as well as separation from whites both economically, socially, and politically. This philosophy was best expressed in Garvey's calls to return to Africa and economic independence within black communities throughout the United States and beyond. 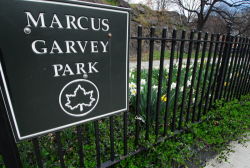 Marcus Garvey Park is located at the site of one of the oldest public squares in Manhattan. This section of public land has been central to the life of Harlem for centuries and dates back to the early colonial period.

Dutch settlers referred to the park as Snake Hill (or Slangberg) due to its reptile population. British fortifications on the site guarded the Harlem River during the Revolutionary War. In 1835, the Common Council considered razing the hilly area to accommodate new streets, but the local citizens petitioned to preserve it as a public park in which was successful. The park opened as Mount Morris Park in 1840, now known as Marcus Garvey Park. The park was originally part of the estate of Metje Cornelius Kortright and is rumored to have gotten the name “Morris Park” in affiliation with the elected mayor in 1841, Robert Morris. The park itself dates back to the 1811 Commissioners' Plan for Manhattan.

Marcus Garvey was one of the founders of the black nationalist movement in the early twentieth century. Garvey was born in St. Ann’s Bay, Jamaica on August 17, 1887 and immigrated to Harlem in 1916, where in 1918 Garvey established the headquarters of the UNIA. Garvey started the UNIA (United Negro Improvement Association) in which became the first modern black nationalist organization in 1914. The UNIA boasted over 800 chapters in which supported Garvey’s message of black economic self-sufficiency. At the UNIA’s first convention, Garvey declared his plans to build an independent nation for black Americans in West Africa. The UNIA promoted black economic self-sufficiency, establishing black-owned businesses, and publishing the Negro World newspaper. To finance these projects, Harvey created his own shipping line called the Black Star Shipping Line. Though, Harvey was later convicted of mail fraud in which after serving two years of prison was deported to Jamaica.

Marcus Garvey Park is a meeting place for neighbors, a holy place for members of local churches, and a loved area for schoolchildren. As the park’s natural features have been preserved, a number of architectural elements and improvements were done in time. After three decades of unimprovement’s to the park, in the 1930s Robert Moses, parks Commissioner, partnered with the Federal Works Progress Administration, installed terraces, stairs, a system of stone walls, and playgrounds in which remain today. In the 1960s the City constructed a recreation center, an amphitheater, and a pool. In 1856 a fire watchtower was created by Julius Kroehl in which was designated a landmark in 1967. Mount Morris Park was renamed for Marcus Garvey in 1973.