Established in 1980, this museum is dedicated to preserving and sharing the history and culture of the Haudenosauee or Iroquois people. The museum includes special exhibit areas for children in addition to galleries of historic artifacts and art. There is also a galley filled with works by current Haudenosaunee artists, allowing them to showcase their work and demonstrate the vibrancy of their dynamic culture.

The Creation Story Display inside the Iroquois Indian Museum. The Iroquois Indian Museum, which is built to look like a Haudenosaunee Longhouse. Haudenosaunee dancers at the Iroquois Indian Museum, about to do a cultural dance demonstration. 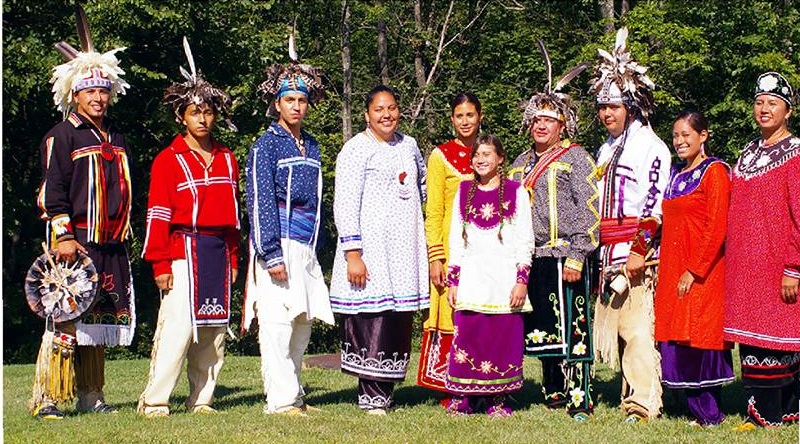 Throughout the museum, visitors can experience pieces of Haudenosaunee culture, including an exhibit dedicated to the traditional creation story. This exhibit is based on the oral history tradition that starts with the creation of Turtle Island (North America). To Haudenosaunee people, there are no borders and all of the land was created as one for Skywoman when she came down from the Skyworld. There are pictures depicting this story as well other tools central to Haudenosaunee economy and culture, as well as oral history traditions that are central to understanding the history of Native people. Also within the museum there is also an outdoor amphitheater that has a special floor constructed for Haudenosaunee dancing. The amphitheater is also used for storytelling, talks, and a vast array of other performing arts.

The Iroquois Indian Museum is located in modern museum building designed to resemble a longhouse, a traditional home to Haudenosaunee peoples. Longhouses were inhabited by as many as twenty families with entrances at both ends, smoke holes at the top, and several hearths. The museum's design demonstrates how significant the longhouse was and is to Haudenosaunee people.