Evergreen Cemetery is one of the oldest and largest cemeteries in the Maine, housing and impressive collection of funerary art and spanning over 239 acres. Within the cemetery are intered a number of historically relevant Portlanders, including famed architect John Calvin Stevens, businessman and notable citizen Asa William Henry Clapp, U.S. Attorney General and Associate Justice of the U.S. Supreme Court Nathan Clifford, and playwright Charles Goddard. A number of structures within were designed by notable Casco Bay area architects Mary Ellen Lunt Wilde and Frederick A. Tompson.

Evergreen Cemetery on the 30th of August, 2008. Photograph by Thomas.macmillan of Wikimedia Commons. 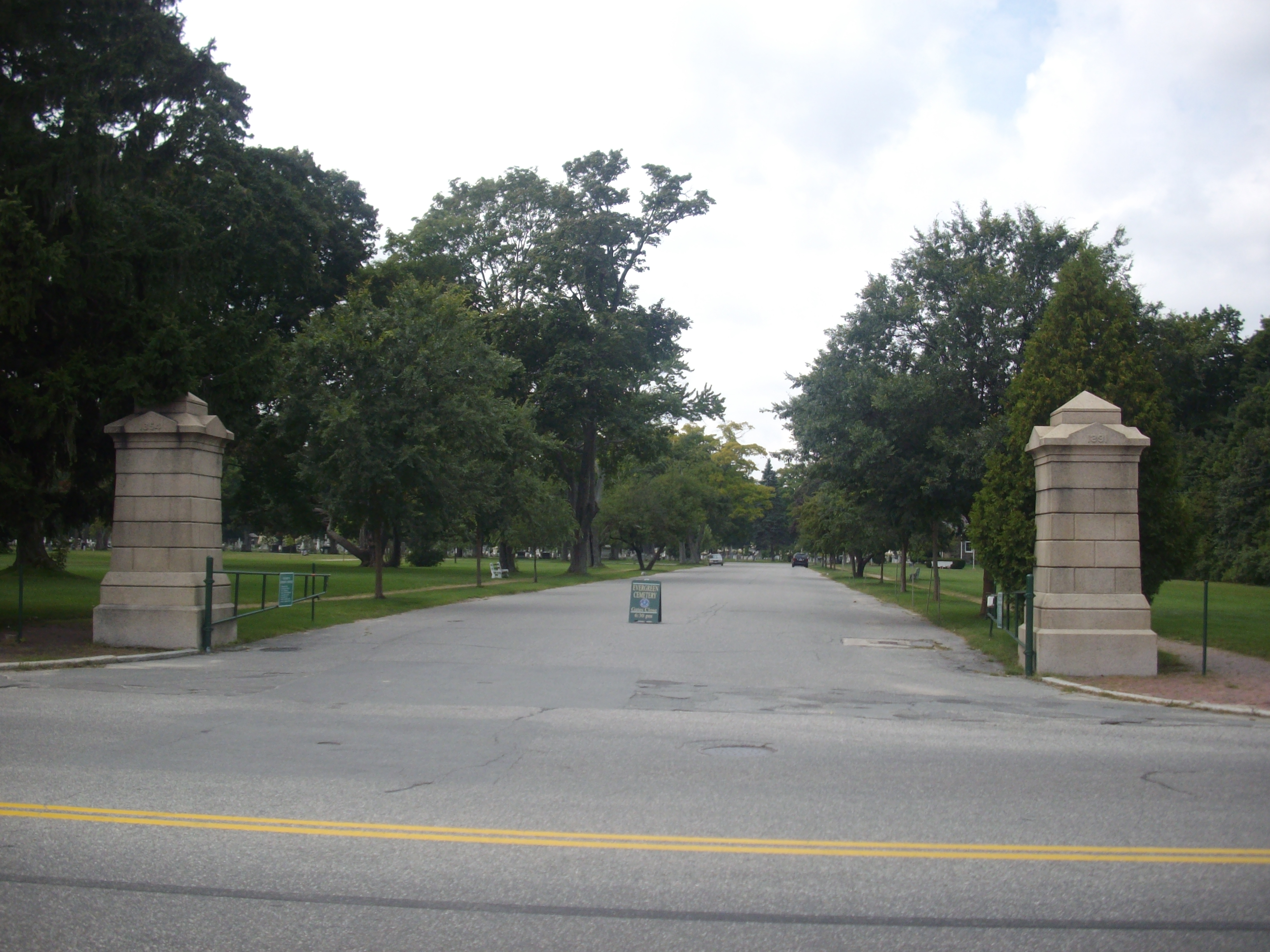 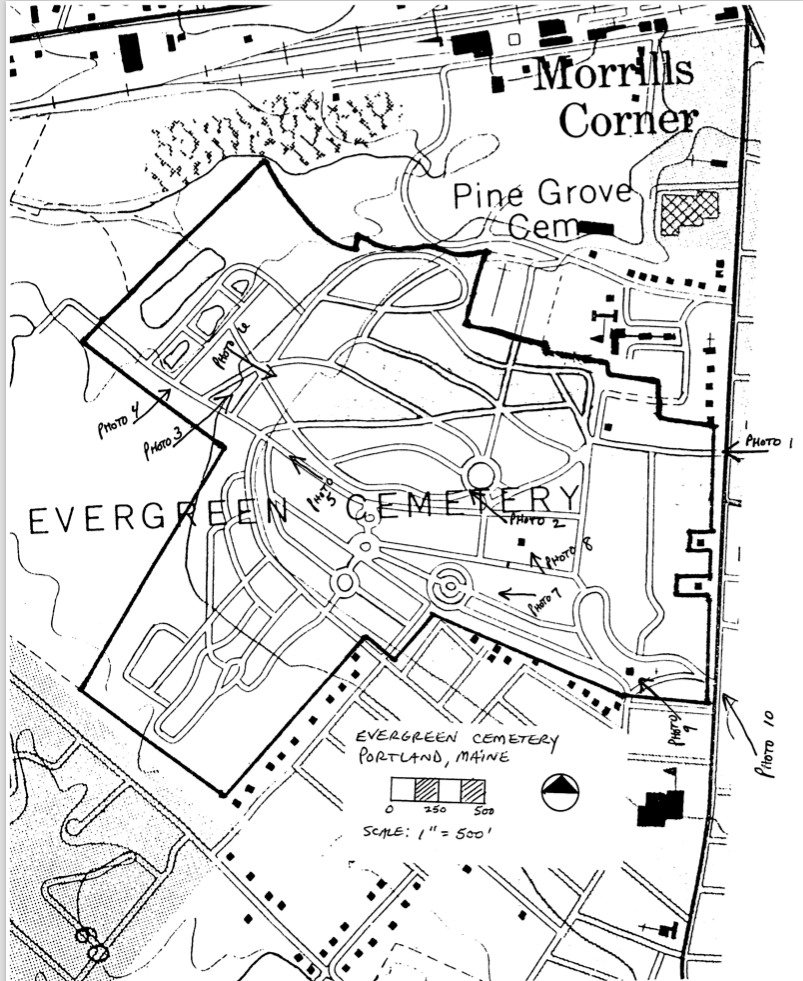 The original plan for the cemetery, listed by the NPS with the cemetery's NRHP nomination 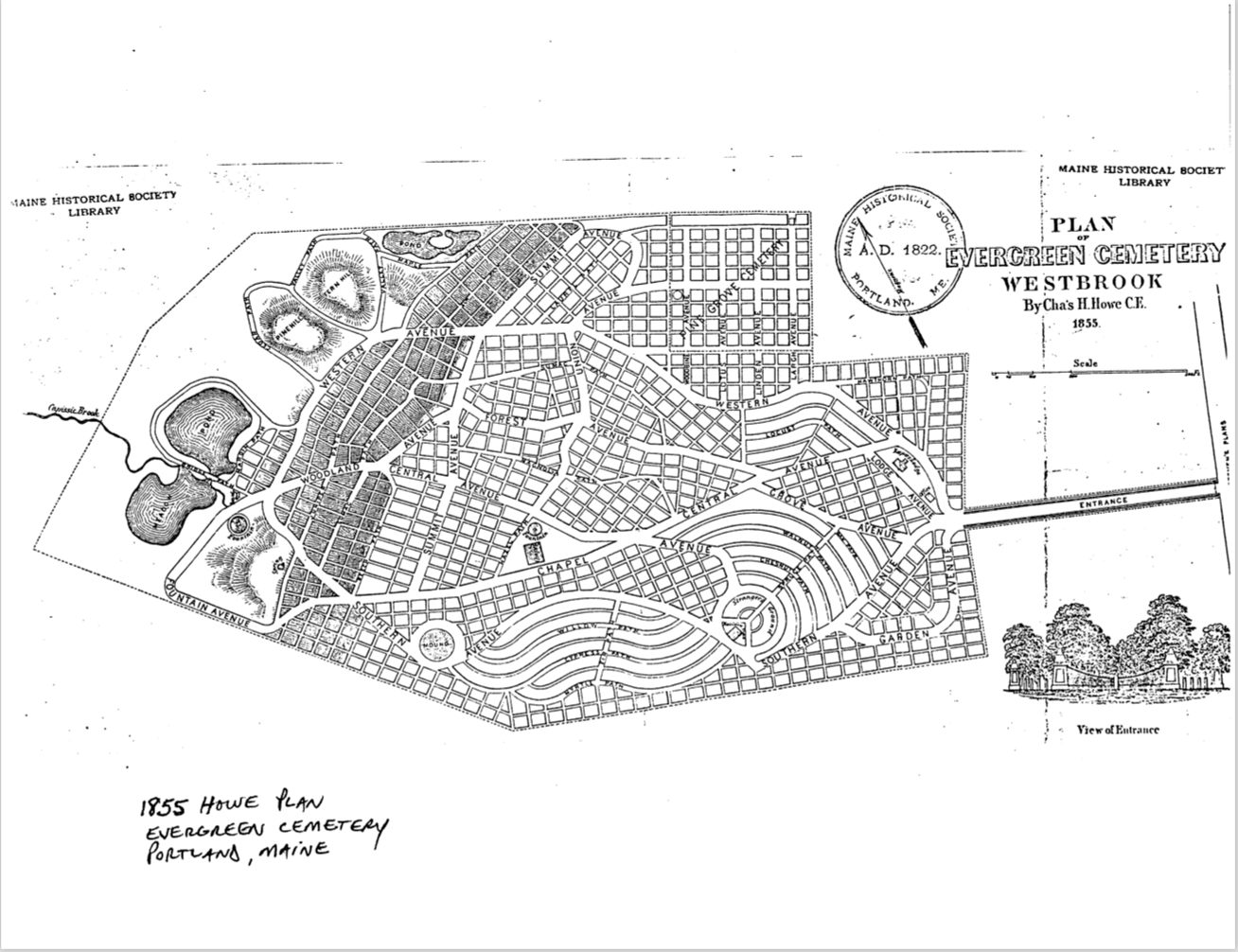 The Deering neighborhood of Portland was once known as the town of Westbrook and the cemetery was established by the leaders of that town in 1855.  Nearly four decades later, the area containing the cemetery would be re-established as the Town of Deering, named after the illustrious Deering Family of the Casco Bay area.  Less than 8eightyears after the Town of Deering was established it would be annexed by the City of Portland, bringing the Evergreen Cemetery with it.

Within the cemetery grounds, there are a number of historically and architecturally relevant buildings.  The first of these is the Wilde Chapel, which was erected in 1902.  Designed by Mary Ellen Lunt Wilde of the Town of West Falmouth in cooperation with architect Frederic A. Tompson as the final resting place for her husband, Samuel Wilde, Jr., the chapel has been restored and up kept by the Friends of Evergreen charity organization.  The bronze bell in the belfry of the chapel contains an inscription from Wilde's widow.

There are two other particularly notable structures within the cemetery.  The first of these is the F. O. J. Smith Tomb, which is also listed on the National Register of Historic Places.  The Smith Tomb is designed in an incredibly rare style for the State of Maine: the Egyptian Revival architectural style.  Another notable structure is the Chisholm Tomb of 1913.  The architect of this tomb is unknown as of the approval of the cemetery’s nomination in 1992.  The tomb is built in a classical style, displaying pseudoperipteral columnn structure (meaning the front of the tomb has free-standing columnns, but the columnns on the sides of the structure are built into the walls.)  The Chisholm Tomb is an almost exact copy of the Maison Carree in Nimes, France.

There are a number of statues within the park of note as well. The granite statue of J. S. Winslow is one of a few granite statues of its type in the state. There are two statues cast from bronze in the park as well. One rests in the Wescott family plot, a robed woman frozen, seated, in eternal mourning. The other bronze statue is rather new, placed in 1972 by the Fraternal Order of Elks.  The statue is, predictably, in the form of an elk.

The cemetery was widely recognized for its unique adherence to its rural roots.  In many ways, the cemetery has served the City of Portland both as a burial ground and as a park for the respite of the living.  The cemetery’s nature of rurality persists to this day, despite the great expansion of the City.

Visit Evergreen. Friends of Evergreen. Accessed August 06, 2017. http://www.friendsofevergreen.org/visit/. Website hosted by the organization that cares for Evergreen Cemetery. Much information on various aspects of the cemetery.