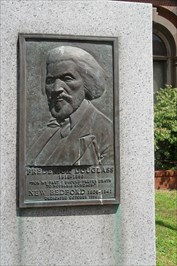 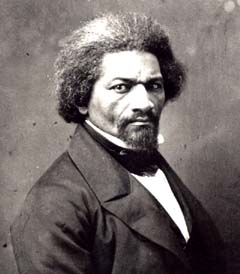 'FOR MY PART, I SHOULD PREFER DEATH

The stone monument is dedicated to the memory of Frederick Douglass, who was a pillar in the abolitionist movement before and during the American Civil War.  He was born in Maryland as a slave in 1818 and given the name Frederick Bailey. When he was twenty years old, he escaped slavery and fled north via the Underground Railroad.  Two New Bedford Quakers, named William C. Taber and Joseph Ricketson, guided Douglass and his young wife Anna to the home of Nathan and Polly Johnson (another historic site in New Bedford and now home to the New Bedford Historical Society).  The Douglass family stayed in the Johnson house for about a year, until they were able to rent their own space on Elm Street.  Two of their children, Rosetta (1839) and Lewis (1840), were born in New Bedford.

It was during his time in New Bedford where Frederick Bailey became the abolitionist Frederick Douglass. Douglass soon made a name for himself as a passionate advocate for human rights.  He fought for abolitionism as well as equality for women.  He was such a renowned speaker against the injustices of slavery because, unlike many of the other prominent voices in the movement, he had actually lived as a slave and experiences those injustices firsthand.

In addition to speaking out against slavery, he authored newspaper articles, other periodicals, and three autobiographies about his life as a former slave and his escape from the institution. He published the Narrative of the Life of Frederick Douglass, an American Slave in 1845, followed by My Bondage and My Freedom in 1855 and The Life and Times of Frederick Douglass in 1881. These books are now considered classics of American culture and provide a great understanding of this tumultuous time in American history.

The monument was dedicated on October 17, 1996. The dedication honored the 100th anniversary of his death (1895).  The City of New Bedford and the New Bedford Chapter of the NAACP sponsored the memorial.