The Robert Church Park is an eight-acre park located on the east end of Beale Street. The park was established in 1899 and named after the first African-American millionaire in Memphis, TN, Robert Reed Church. The park is equipped with a playground and four pavilions. The park has been and is to this day the location for the Africa in April Festival for more than 20 years.

This memorial commemorates Robert Reed Church, the first African American millionaire in Memphis. He established a park here for the city's black population, which did not have a recreational area in the city. The park is named after him. 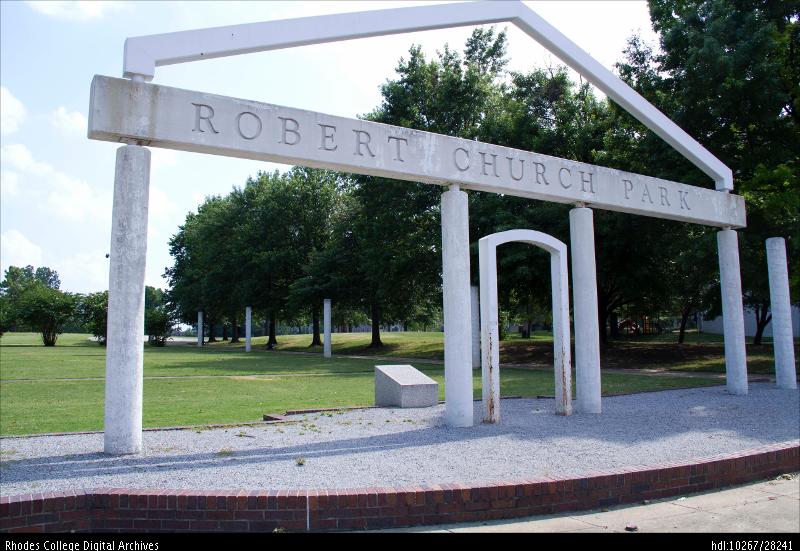 Robert Reed Church was an African-American entrepreneur and landowner who lived most of his life in Memphis, TN. Church was born in Holly, Mississippi, the son of Charles B. Church, a white steamboat owner-captain. His mother was a slave owned by his father and died when Robert was 12 years old. His father trained him in the steamboat business and put him to work in the highest position a black could have on the boat. In 1862, while working on a steamboat, the Union captured the boat. Church escaped capture by the Union troops and became a highly respected businessman in Memphis. He bought land and opened a park and recreational facility for local blacks. Church also built the 2,000 seat Church Park and Auditorium. This was the first urban recreational center in the country owned by an African-American.

In 1899, Memphis did not have facilities for recreation that included black citizens. It was then that Robert Church, Sr. bought land to accommodate the needs of the black community. He established a park and named it "Church's Park and Auditorium". The value of the Church auditorium was at $100,000 when built. The Park and Auditorium became a well-known cultural, recreational, and civic center for black Memphians. Church’s auditorium included Booker T. Washington, James Weldon Johnson, and the Fisk Jubilee Singers as speakers and performers. In 1902, President Theodore Roosevelt spoke to people gathered in the auditorium and on the surrounding grounds.

A lot of Memphis’ early black history took place in Church’s Park and Auditorium on Beale Street. In the 1940’s the city of Memphis administration changed the name of the park and auditorium to “Beal Avenue Auditorium.” Eventually, the government’s urban renewal program had the structures on the site demolished and left it empty. In 1987 the park was given new landscaping and refurbished into a tree-shaded grass area.

Church’s Park was registered in the National Register of Historic Places and made a part of the Beale Street Historic District in 1993. Roberta Church, the granddaughter of Robert R. Church Sr. donated a white granite and bronze memorial monument of her grandfather inscribed with historical information in 1994.