Completed in 1914, The Davenport was the first United States hotel with air conditioning, a central vacuum system, and a pipe organ. The luxury hotel was also the first to place Crab Louis on its menu. Presidents, world leaders, and famous artists have stayed in this historic hotel that reflects the history of Spokane and Louis Davenport, a small restaurant owner who rose to become one of the city's significant figures. Like many other luxury downtown hotels, the Davenport lost business to lower-priced hotels near interstates following the decline of rail traffic, and after years of declining business, the hotel closed in 1985. The building was saved from demolition in 2000 and thanks to a complete renovation, the Davenport reopened in 2002 and is once again the premier hotel in the state of Washington. 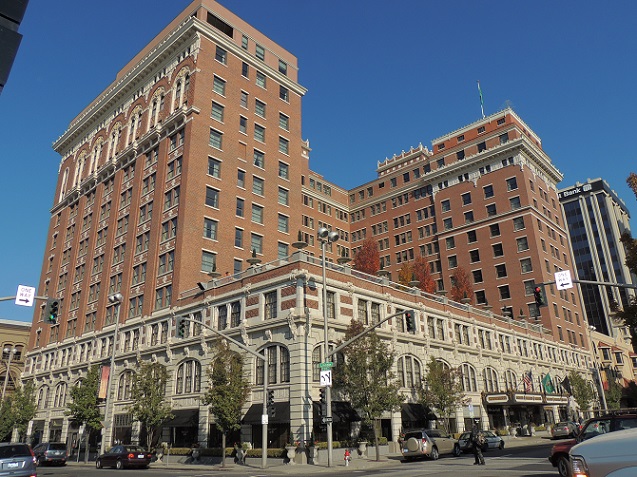 Spokesman-Review photo of the hotel(date unknown) 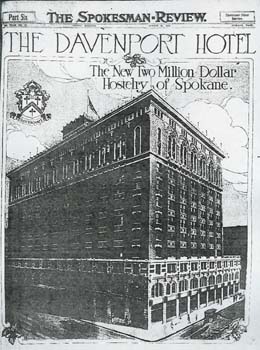 Louis Davenport arrived in Spokane with little but ambition, but through hard work and careful planning, he built the leading hotel in the state which continues to serve as a reflection of his success. Born in Nebraska in 1868,  Davenport arrived in Spokane in 1889 after spending thirteen years in San Fransisco. Though only twenty years old upon his move to Spokane, and only possessing $1.25, he went on to gain wealth and notoriety.
Davenport worked in a family member's restaurant until it was destroyed in the Great Fire of Spokane in 1889. Davenport responded by working to rebuild the city, earning $125 by removing debris and taking on other small jobs. Davenport used this money to purchase a waffle iron and supplies. He later opened the successful "Davenport's Famous Waffle Foundry." Davenport first sold his waffles from a tent before acquiring funds to rent a space in a brick and mortar building. With the population surging into town, and the demand for ready-made meals for working men, Davenport quickly expanded his menu to fit his customers' appetites and his profits grew in return.

Davenport was able to invest in his business, which grew into the Davenport Restaurant after he purchased the building adjoining his original location. He hired Kirtland Cutter, an architect, to make the two buildings appear as one. Davenport soon gained a reputation for providing the best food and service in the city. As a result, a group of investors supported his vision to manage the hotel, which was constructed at the location where he first sold waffles to passersby.
Davenport operated the hotel with attention to every detail. Later in life, he became an influential resident and worked to expand the park system according to his view of Spokane as a leading city of the Pacific Northwest. Davenport also served on the board of directors for the Spokane and Eastern Trust and the Washington Water Power Company and also worked at the Ryan and Newton company, where he served as a vice president.
When Spokane business people desired to build a hotel to handle the influx of people moving to, or visiting Spokane, they looked to Davenport to give the project legitimacy. The investors also sought the talents of architect Kirtland Cutter on Davenport's advice. The group worked to raise funds in 1912 and by 1913, the first phase of the grand hotel was completed. Not only was the building innovative in its use of air conditioning and central vacuum system, no cost was spared in turning the hotel into a model of luxury and a symbol of the growing city of Spokane.
Numerous dignitaries, leaders, and entertainers have stayed in the Davenport, such as Teddy Roosevelt, Queen Marie of Rumania, John Phillip Sousa, and the great American poet, Vachel Lindsay. Additionally, in 1922, the first commercially licensed radio station in Spokane, KHQ, broadcast from the hotel. Bing Crosby, who was a drummer in a local band played there live.
After his retirement, Davenport lived out his remaining years as a resident of the hotel that bears his name and it was here where he died in 1951. The hotel suffered after the death of its founder, but it is unlikely that any manager could have prevented the decline in business that plagued downtown hotels following the rise of inexpensive interstate hotel chains. The Davenport closed in 1985 but thanks to its purchase in 2000 and two years of renovations, it is once again the most luxurious in the Pacific Northwest. The hotel has been home to several recent projects that reflect the hotel's early history of innovation. In 2011, for example, the U.S. Green Building Council (USGBC) awarded LEED® Certification to The Historic Davenport Hotel and The Davenport Tower, making it the only hotel in the state of Washington to obtain Gold status.