Although official records state this residence was constructed and finished in 1869, maps of 1796 show such a house existing. Despite this inconsistency, the Prada House is still one of the oldest surviving structures in Santa Fe. The namesake, Juan Jose Prada, was a descendant of the first Prada to come to Santa Fe. The latter was a soldier of the Spanish Empire sent to garrison at Santa Fe in the area's early years under Spanish rule, who was a native of modern-day Chihuahua, Mexico. Over the latter years of the 19th century and the first few decades of the 20th, the home and land was transfered to handful of people, who expanded and repaired the home, leaving much of the original architecture. Today, it is a private residence.

Due to it being a private residence, photos of the home look like this. Only parts of the house are allowed to be shown, through foliage, as to maintain privacy. 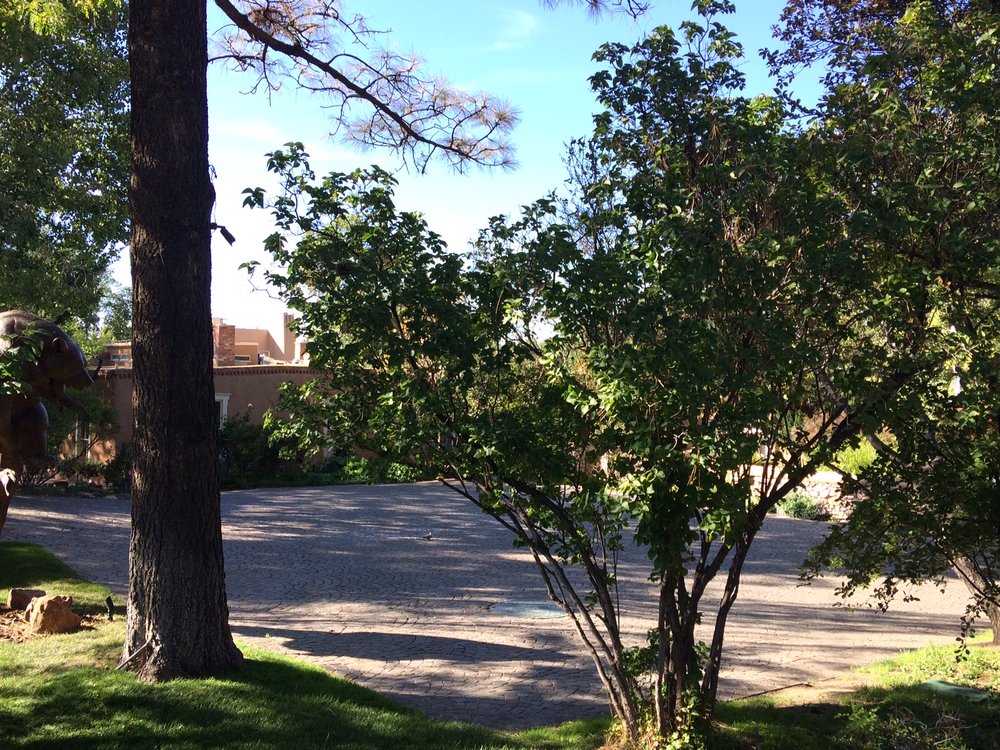 "According to early maps, this house may have been in existence as early as 1768, although its first date of record is over 100 years later. ln 1869, when it was owned by Juan José Prada, it consisted of two sections, with a corridor running from north to south between them. At that time, he deeded the west section to Altagracia Arrañaga, and in 1882 his widow deeded the east section to her son-in-law, Miguel Corman, a descendant of one of the soldiers in the U.S. Army of Occupation. The deeds stipulated that the front door of the corridor be left open to allow access to a dance hall in the rear, and that the well in front of the house, which is still standing, was to be free for the use of those living in both sections. During the late nineteenth century the brick pretil, or coping, was added to the roof by artisans who built St. Francis Cathedral.

In 1927 the east wing was purchased as a residence by the late Margretta S. Dietrich, who added other rooms and modernized its interior without changing its classic Territorial style of architecture. Later, she acquired the west section of the house and joined the two together, but without the original connecting corridor.

Still intact at the northern end of the property is a small barn of jacal construction-squared-off cedar logs more than thirty inches in circumference set upright in the ground with cracks chinked with adobe. This type of construction was often used in New Mexico.

The first owner of record, Juan José Prada, was a descendant of José Prada, a native of Chihuahua, who came to Santa Fe as a soldier in the Santa Fe garrison of the Spanish army."

*Due to it being now a private residence, one should be careful when arriving to the location of this entry.*