Constructed between 1911-1912, the Scottish Rite Temple of Santa Fe, New Mexico has a strong historical association with the Freemasons of the United States. Followers of Freemasonry believe in the soul's immortality and promote morality, charity, and obedience to the land of the law. The temple's site was utilized as a clubhouse and a gathering place where Freemasons would come to recite various moral and spiritual lessons and dramas passed down by generations of Freemasons. The temple's design is a combination of the Spanish Pueblo Revival, the Santa Fe, and the Spanish-Californian styles. The temple's most notable features are its jewelry-box theatre, pink stucco exterior walls, and hipped roof with orange-red tiles. The temple was listed on the National Register of Historic Places in 1987 by the National Park Services. The listing reflects the temples' deep-rooted history with the Freemasons and its multi-faceted architectural design. The temple and the site were filming locations for the 2016 film, Whiskey Tango Foxtrot. 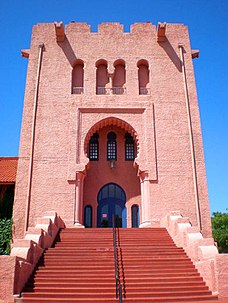 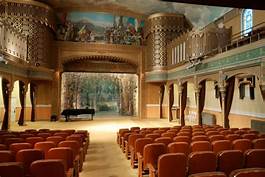 Blast from the Past: The Scottish Rite Temple 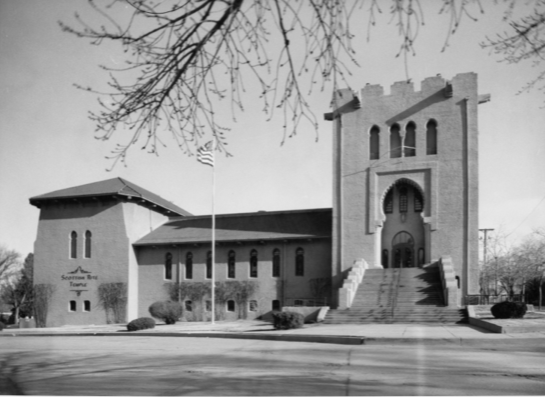 Under Construction: The Scottish Rite Temple

In 1909, Santa Fe's local newspaper, The Daily New Mexican announce that New Mexican Issac H. Rapp had been awarded commission to design the Scottish Rite Temple. After it was built, The Daily New Mexican printed an article, saying that Rapp's approach to the temple was deemed "unsatisfactory." The new Scottish Rite Temple was designed and built between 1911-1912 by Los Angeles architects, Sumner and S.R. Hunt. The construction process was broken down into three stages: the auditorium and tower (phase 1), dining hall and kitchen (phase 2), and the larger kitchen, the theatre shops, dormitory rooms, the jewelry box theater, and the western courtyard (phase 3). The architectural design of the historic cathedral is a mixture of the Santa Fe, Spanish-Californian, and Pueblo Revival styles, yet what makes the structure stick out is its pink stucco exterior walls and its hipped roof with orange-red tiles.

The Scottish Rite Temple has historically been used as a clubhouse for social organizations. The temple has been the center of social reunions with various fraternities, women's clubs, civic and professional groups of businessmen. One of the most notable organizations that used the temple was the Free and Accepted Masons. The organization is a mens-only secret society that originated from England. The institution practices Freemasonry, which is the belief of a soul's immortality. Freemasonry contains many of the elements of a religion, such as morality, charity, and obedience to the law of the land. During the Temple's prime, the Free and Accepted Masons' population jumped from 550,000 members to over three million. In addition to the reunions, the temple served as headquarters for the Scottish Rite, a branch of Freemasonry in New Mexico. The temple's theater was used for members to recite various moral and spiritual lessons and dramas of Freemasonry. The dinning room hall served breakfast and lunch for the members. The growth in the New Mexico Scottish Rite during the teens and 1920s paralleled national trends and reflected the success of the building's plan and design.

The year after the temple's construction, the staff of the recently-formed Museum of New Mexico took the lead in defining a revival style based directly on local Spanish and Pueblo architecture. The Scottish Rite Temple was dedicated on November 17, 1912, and the Museum opened its "New Old Santa Fe" exhibit, which presented their efforts to define a Santa Fe style, now often called the Pueblo Revival. Today, the temple is a particularly good, intact example of the increasing theatricality of ritual, which characterized Freemasonry in the United States at the turn of the 20th century. The temple was listed on the National Register of Historic Places in 1987 by the National Park Services. The listing reflects the temples' deep-rooted history with the Freemasons and its multi-faceted architectural design. The temple and the site were filming locations for the 2016 film, Whiskey Tango Foxtrot, staring Tina Fey, Lorne Micheals, and Ian Byrce.