The railroad is integral to the development of Davis, as the town, then known as Davisville, began as a train station. It was built by the Southern Pacific Railroad in 1868. The current building was built in 1914 and is listed on the National Register of Historic Places. 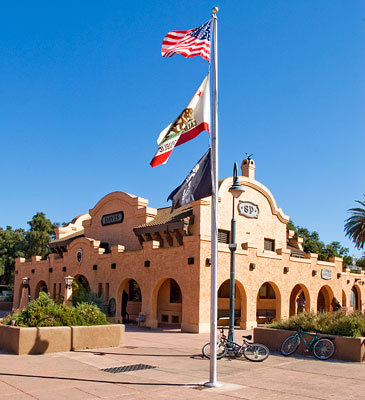 The Southern Pacific Railroad Station was built in 1914, replacing the original structure which was built in 1868. The building is architecturally significant because it is the only Mission Revival  structure in the city and one of the city's only historic buildings.

The current building replaced an earlier terminal built in 1868 for the defunct California Pacific Railroad. Eventually, the California Pacific was acquired by the Central Pacific, which was later bought by the Southern Pacific. The building still bears the letters "SP" on its outer facade.

The building is currently in use as an Amtrak station and is listed on the National Register of Historic Places.