Also known as the Chimayo Rebellion, the revolt was done by dissatisfied New Mexicans over the affairs and laws of the local Mexican Government and those in the nation's capital of Mexico City. Following Texas's victory over Mexican forces commanded by Mexico's dictator Santa Anna, the Mexican government issued more restrictive measures on political participation, taxes, and customs. Added to Santa Anna reinstating the corrupt former governor of New Mexico, Albino Perez, back into the governorship (despite votes on the contrary) sparked rebellion within Mexico's northern lands. The revolt began after Mayor Juan José Esquibel of Santa Cruz de la Cañada (in New Mexico) was arrested under Perez's orders. Freed by sympathizers, Esquibel led the rebellion against Perez. When this popular revolt began to be more violent and just as corrupt as the government it oust, loyalists of Santa Anna and Perez and Mexican Federal forces gathers to shut down the revolt after battles and skirmishes throughout the then New Mexico territory of New Mexico. A monument to Perez and to the Revolt of 1837 is found in the Palace of the Governors. 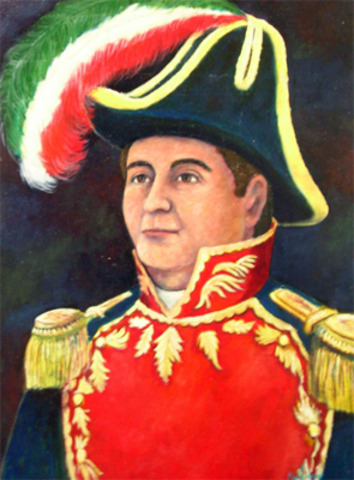 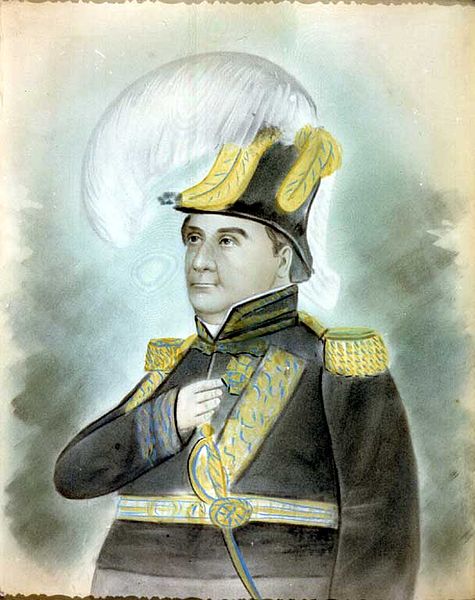 Albino Pérez was a native of Veracruz. Pérez was a distinguished army colonel from central Mexico. He was appointed Governor of New Mexico by President Antonio López de Santa Anna in 1835, under the new centralized form of government. He succeeded Francisco Sarracino as civilian governor and Captain Blas de Hinojos as military governor. Hinojos had been killed on 28 February 1835 in an ambush while on a slave raid into Navajo country.
Pérez rapidly became unpopular as a representative of the centralist government who was expected to enforce its unpopular Departmental Plan and taxation program. On 16 October 1835 he announced new regulations of trade along the Santa Fe-Chihuahua trail. He linked increases in attacks by well-armed Comanche, Apache, Ute and Navajo raiders to illegal trade in guns with these Indians, and the regulations stopped this trade as well as stopping beaver trapping without license. The law, however reasonable, was unpopular.
It did not help that he had an autocratic manner and was not a native of the province. Pérez dissolved the municipal council of Santa Cruz de la Cañada in December 1836, and in July 1837 arrested the alcalde of Santa Cruz, Juan José Esquibel. A mob quickly freed Esquibel, who formed a new council opposed to the central government.
Pérez managed with difficulty to assemble 200 volunteers to put down the rebellion in Santa Cruz, and marched north on 7 August 1837. He met a force of 1,500 or more armed rebels at La Mesilla (Black Mesa) near San Ildefonso Pueblo. Most of Pérez's force deserted him, and he began to retreat with a small group of supporters. They were caught on the outskirts of Santa Fe by some Indians from Santo Domingo Pueblo, who decapitated Pérez and killed some of his supporters. The rebels proclaimed José González of Taos, one of their leaders, as Governor of New Mexico. The former governor Manuel Armijo gathered troops, and in January 1838 took control and had González executed.

The Daughters of the American Revolution originally erected the simple stone marker, engraved with the date of Pérez’s assassination, near the corner of Hickox and Agua Fría streets in Santa Fe, in 1901. But by 1970, the stone had become so worn that it was moved to the Palace of the Governors for safekeeping. For years, it has sat beneath one of the giant cottonwoods in the palace's courtyard. In June 2007 a monument commemorating Pérez was deeded to the Palace of the Governors in Santa Fe.

Governor Albino Pérez had arrived from central Mexico in 1835. The Pérez administration was opposed by the people and especially by the inhabitants of the northern part of the territory, who resented the “outsider” forced upon them by President Santa Anna. Their dissatisfaction was exacerbated when, following Santa Anna’s defeat in Texas, the Mexican government drafted a constitution that tightened administration and tax-collection and imposed property qualifications on political participation. New Mexicans assumed that Pérez would attempt to levy the taxes and completely restructure the regional political system in accordance with the new constitution.
Other grievances included Pérez's reinstatement of Francisco Sarracino, a former governor who had been suspended for fraud from his position as subcomisario (a customs official); Pérez's appointment of a civil servant named Ramón Abreu as prefect when others thought they were better candidates; Pérez's failure to rein in customs officials who defrauded American traders on the Santa Fe Trail, some of whom lived in Taos in northern New Mexico; and the inadequate food and bad conditions endured by men forced to serve in the militia against the Navajos and Apaches. Some may also have resented his adultery (he openly had a relationship with his housekeeper, his wife being in Mexico City) and his wealth and luxurious possessions, as most New Mexicans were poor.
Opposition to Pérez increased, with his opponents circulating rumors of enormous taxes. The Departmental Assembly's list of three nominees for the next gubernatorial term did not include him. Opposition culminated in the summer of 1837, with the spark that set off the rebellion having to do with the alcalde (mayor) of Santa Cruz de la Cañada, Juan José Esquibel. Esquibel had accepted a bribe from a relative to release him from jail when charged with a "grave crime" and had defied Pérez's order to pay a fine and return his relative to jail. Then Esquibel supported two merchants against a man who had documentation that they owed him money. Pérez's appointee as prefect, Ramón Abreu, suspended Esquibel and on learning of the bribe, had him put in jail in irons. At the end of July a mob freed Esquibel, and he organized a rebellion.

When Pérez heard of the rebellion, he attempted to raise a militia of volunteers, but his call did not meet with an encouraging answer. On August 9, Pérez started for Santa Cruz with the troops at his command, meeting the rebels near San Ildefonso. Most of Pérez's men promptly abandoned him and joined the rebels. Pérez retreated to Santa Fe with the few men who remained loyal to him. Unable to find security in the capital, Pérez attempted to flee the city by night, but a group of Santo Domingo Indians intercepted and killed him. The rebels decapitated Pérez and returned his head to Santa Fe for public display. Secretary of the Department Jesús María Alarid, former interim governor Santiago Abreú (one of Ramón's brothers), and approximately 20 officials from the Pérez government were also killed, some by mutilation. That same day, the rebels entered the capital and placed José Gonzales, a Genizaro (of Taos Pueblo and Pawnee ancestry) from Chimayo, in possession of the palace and as governor of the territory.
Initially the rebel government was widely popular in the Department, but it soon made enemies by committing atrocities in gaining power and confiscating the massacre victims' property (at the expense of not only their heirs but also their creditors). The ruling junta popular was contentious and indecisive, its minutes full of crossed-out sections. Meanwhile, in Santa Cruz, the Cantón did not dissolve, instead continuing to imprison people and threaten them with death, outside the control of Gonzales's government. In Taos, unrest broke out against the Catholic Church and its leader there, Padre Martínez, in early September.

In the town of Tomé in southern New Mexico, the priest, Francisco Antonio de Madariaga, began agitating for a counterrevolution. On Sept. 8, he and other "citizens who love their country" adopted the "Plan of Tomé", which named former governor Manuel Armijo to command their force. The 600-man army detachment of Santa Fe, which Gonzales had disbanded, reorganized and marched south to join Armijo. Armijo wrote to the Mexican authorities, explaining the situation, and then marched to Santa Fe. He met little resistance; indeed Gonzales, who had gone to Taos to visit his family, was arrested in Santa Fe on Sept. 11, before Armijo's arrival on the 14th. While in Santa Fe, Armijo wrote to Mexico again, stating what he had done and asking for troops to complete his victory and re-establish peace.
A former mayor of Taos, Pablo Montoya, led a Cantón force of reportedly 3000 men on Santa Fe. Though Armijo had only about 1000 soldiers, they were much better trained and equipped than the rebels, and Armijo negotiated a peace treaty that was signed Sept. 21. The rebels surrendered Juan José Esquibel and three other men from Santa Cruz to be indicted, but Gonzales was released and the other rebels received amnesty (Montoya would later be executed for his part in the Taos Rebellion).
In October, the rebellion flared up yet again in Las Truchas, east of Santa Cruz. Armijo ordered the execution of Esquibel and the three other prisoners, but to Armijo's anger, his subordinates postponed the execution. Armijo spent the next few months raising funds to feed and pay his soldiers, who were on the point of mutiny. In January 1838, Federal troops from Zacatecas and Chihuahua arrived in response to Armijo's request, bringing his official appointment to the governorship.
On January 23, Armijo sent an ultimatum to the rebels in Truchas. The following day, when they did not surrender, he had his four prisoners executed. On the 27th he marched toward Santa Cruz, where Gonzales and Antonio Vigil of Truchas were gathering their forces to return to Santa Fe. The two armies met between Santa Cruz and Pojoaque, and Armijo's forces (commanded by Lt. Col. Cayetano Justiniani of the Veracruz dragoons) prevailed in the battle. Gonzales fled to Santa Cruz where, by Armijo’s order, he was executed in the public square.
Armijo was to remain Governor of New Mexico through the Texan Santa Fe Expedition until 1844. He became governor again in 1845 until he withdrew without a fight while New Mexico was taken over by the United States Army under the command of General Stephen W. Kearny in 1846.

Weber, David J. (1986) "Vigil on the Maladministration of New Mexico under Governors Pérez and Martínez and under Commanding General Garcia Conde" Arms, Indian, and the Mismanagement of New Mexico, University of Texas at El Paso.