The Goethe House was designed by famed architect Julia Morgan and constructed between 1919 and 1922. The home was a gift from Lizzie Glide for her daughter Mary Glide Goethe and her husband Charles Goethe. The home is listed on the National Register of Historic Places. 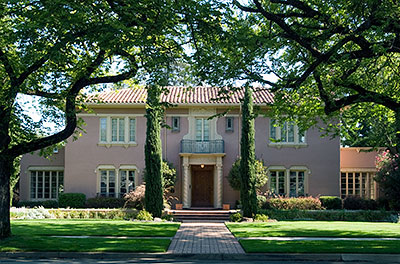 The Goethe House, which is now known as the Julia Morgan House, was built between 1919 and 1922. The home was commissioned by Lizzie Glide as a wedding gift for her daughter, Mary Glide Goethe and her husband, Charles Goethe. The home was designed by well-known architect Julia Morgan, the first woman to become a licensed architect in the state of California.

Located in the Elmhurst neighborhood, the home is the only Morgan-designed residential structure in Sacramento. It was built in the Mediterranean Revival style that was popular in California in the 1920s; it was also one of Morgan's favorite styles. Many of the architectural details within the home were designed by Morgan herself and were created by master craftsmen, some of whom were borrowed from the Hearst Castle construction.

The home remained in the Goethe family until the death of Charles Goethe in 1966. Goethe founded Sacramento State College, and following his death, the home was bequeathed to the college. In 1999, the home was remodeled and officially renamed the Julia Morgan House. It is listed on the National Register of Historic Places.