The Alley Pond Giant, also known as the Queen's Giant, is a tulip poplar tree located in Queens, New York. The tree is between 350 to 400 years old, which according to many, makes it the oldest tree in New York City, predating even the American Revolution. The tree stands at over 133 feet tall and could live to be over 600 years old. Located off the road and away from common paths, the tree is hard to find unless you tour the area with a park ranger. 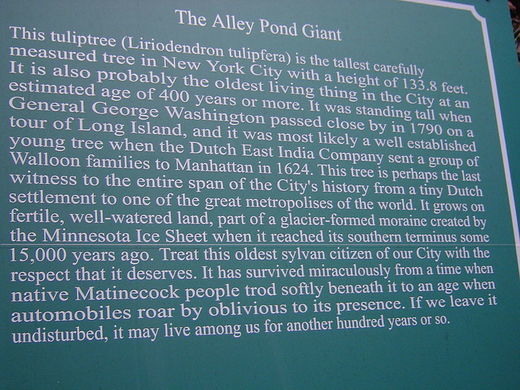 The Alley Pond Giant is a tulip poplar tree located in Alley Pond Park in Queens, New York. It is believed be the oldest tree in New York City, dating back over 350 years. Tulip poplars are known to live to be over 600 years old, so the tree still has some growing to do. In 2000, the tree was measured at over 133 feet (40.5 meters).

In the 17th century, the tree, a sapling at the time, would have been present when the Dutch West India Company sent Walloon families to Manhattan for the first time and when George Washington marched by and onward during the Revolutionary War. It would have even survived the Industrial Revolution and the growth of New York City as a whole. The tree's longevity is often attributed to its location. To find the Queen's Giant, you almost certainly need a park ranger, because it is tucked away off the roadside.