The Union School of Searsport, Maine

Constructed in 1866 to design specifications created by accomplished Portland architect George M. Harding, the Union School of Searsport, Maine, represents a unique design by one of the State’s most influential architects. The building was used as a school until 1953 and has been converted into apartment dwellings. The historic schoolhouse was constructed in the Italianate style with windows shaped by simple arches and paired brackets. The school’s roof, however, is a mansard roof, which was an incredibly popular roof design style in the mid- to late 1800s New England. The Italianate style is often referred to as the “Italian Villa” style.

Photograph of an original plan of the schoolhouse from 1866, hosted publicly in the Penobscot Marine Museum's collection 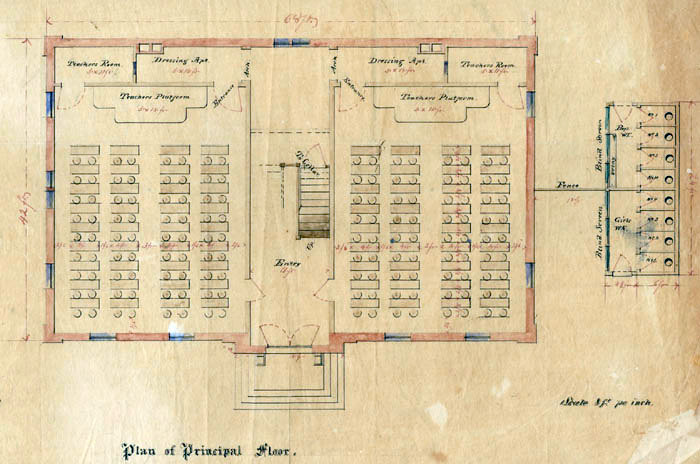 George M. Harding was born in Chatham, Massachusetts in 1927 and would go on to become an incredibly influential architect in the Portland area.  At the age of 17, Harding studied at the Lowell institute and graduated to find immediate work in the area.  Founding his own architectural firm only a few years after graduation, he began to expand his client list further north into the other states of New England.  Finally, in 1858, he moved to Portland, Maine and began to work designs that would shape the region for decades to come.  One of his most notable designs in the Portland area is the Woodman Commercial Block on the Portland waterfront, designed in the Second Empire Style to help revitalize the damaged waterfront district after the 1866 Portland Fire.

In the same year of the fire, Harding’s attention had been drawn to Searsport, Maine, a burgeoning seaport community while working as the State Architect.  In Searsport, he was called upon to design a public school which would be used as both an elementary and a high school.  This school would become known as the Union School, and it would be in consistent use for almost one hundred years, ending its service to the Town of Searsport in 1953.

The Union school is immediately recognizable for its fusion of traditional and rising styles.  While the building is ultimately classified as Italianate in styling, it draws its pedimented facades, symmetry, and pilasters from Greek Revival buildings from earlier decades.  Additionally, the mansard roof is not characteristic to the Italianate or Greek Revival styles, but was a flourish that Harding incorporated into the design himself.  The design of the Union School would go on to influence his other designs including a large school in Lewiston built later in 1866.  His final school commission in 1871 for the Town of Saco was based off of the Union school, featuring modifications to the pavilion, arched windows, and entryway.

Unfortunately, most of George M. Harding’s schools have either been repurposed or demolished at the time of this profile’s creation.  Despite the loss of some exterior features, the Union School still maintains more of its original design than any of the other remaining Harding schools.  The changes made to the Union School since its construction are minor, and it still appears largely as it did when it was constructed.

Searsport Union School House Plan. Penobscot Marine Museum. Accessed July 30, 2017. https://www.penobscotmarinemuseum.org/pbho-1/collection/searsport-union-school-house-plan. A photograph of the design of the interior of the schoolhouse from 1866