Downs Mabson Field is a historical ballpark in Austin, Texas. The park was named after Rev. Karl Downs whom was an influential President of Samuel Huston College. This ballpark was given a historic plaque by Mayor Adler and other city leaders to commemorate and celebrate Austin's Black history. This ballpark is the home of the Huston-Tillotson University Rams baseball team. It was once home to the semi professional baseball team, the Austin Black Senators. 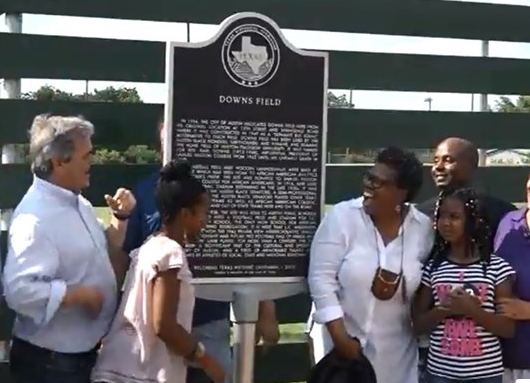 Downs Mabson Field has played a significant role in the sporting and culture history of Austin, Texas for more than a century. This historic field was named after Rev. Karl Downs (1912-1948) whom was the President of Samuel Huston College. This park with grandstand seating for 600 was originally constructed as an enclosed, lighted field for African-Americans. The park represents the history of African-American athletics and baseball in Austin, Texas. It also represents the support of athletics and academics at Samuel Huston College and the self-sufficiency of the African American Community.

The field has been home to many in which it started with the donation to Samuel Huston College in the 1920s where it was used as the school’s baseball stadium. The ballpark was also home to the semi-professional baseball team, the Austin Black Senators. Many notable ballplayers such as Willie Wells, Willie Mays, Satchel Paige, Smokey Joe Williams, and Buck O’Neil have played at Downs Mabson Field. The field is now home to Huston-Tillotson University Rams baseball team in which was combined in 1952 from Samuel Huston College and Tillotson College.

Mayor Adler and other city leaders commemorated and celebrated Austin’s Black history by unveiling a historic plaque to the park along with renovation news in which took place on June 10, 2017. The public was invited to attend this event by the City of Austin Parks and Recreation Department whom is in partnership with the Austin Parks Foundation, Public Works Department, and the Friends of Downs Field and Six Square - Austin’s Black Cultural District. A mosaic mural and a new park entryway were included in the renovations in which was done to honor the African-American baseball history at Downs Mabson Field. “’This is more than just a baseball ballpark,’ said Adler. ‘This is a monument to giants. Downs Mabson Field used to be the home of the Austin Black Senators’” (Spedden).