Overlooking the Golden Gate area of San Francisco, Battery Spencer provided the military a crucial viewpoint and defensive location from 1897 to 1942. During WWII, technological improvements rendered the battery obsolete, the installation was decommissioned, and the rifles became scrap metal. Most known today for its stunning views of the Golden Gate Bridge, Battery Spencer is a popular tourist destination with remnants of its former life accessible to the public.

The view of the Golden Gate bridge from inside Battery Spencer. California State Military Museum (linked below) includes more information about weapons and building of Battery Spencer and profiles of few of the people who served there. 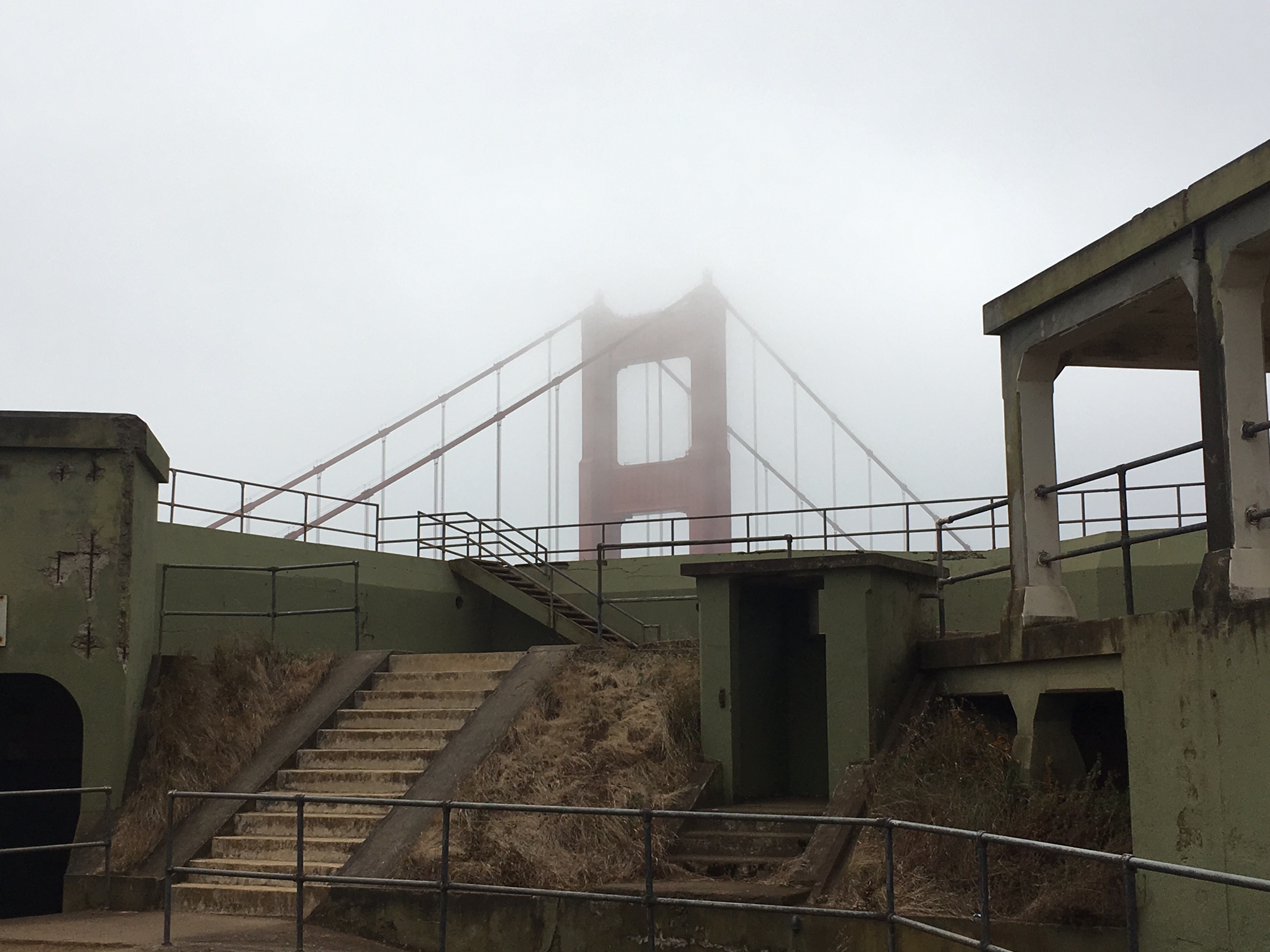 The only posted explanation of the importance of Battery Spencer 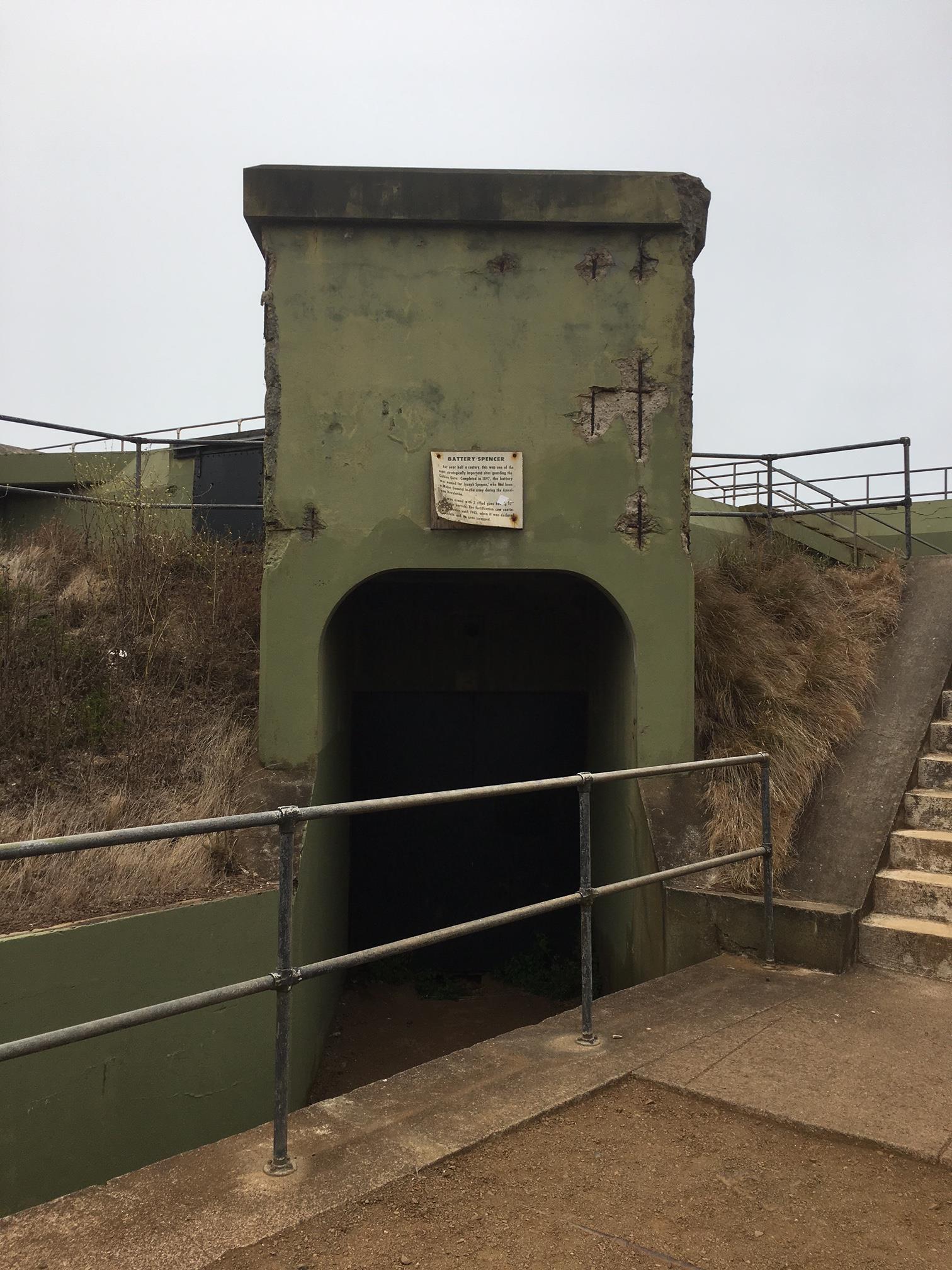 A closer view of one of the signs describing Battery Spencer. 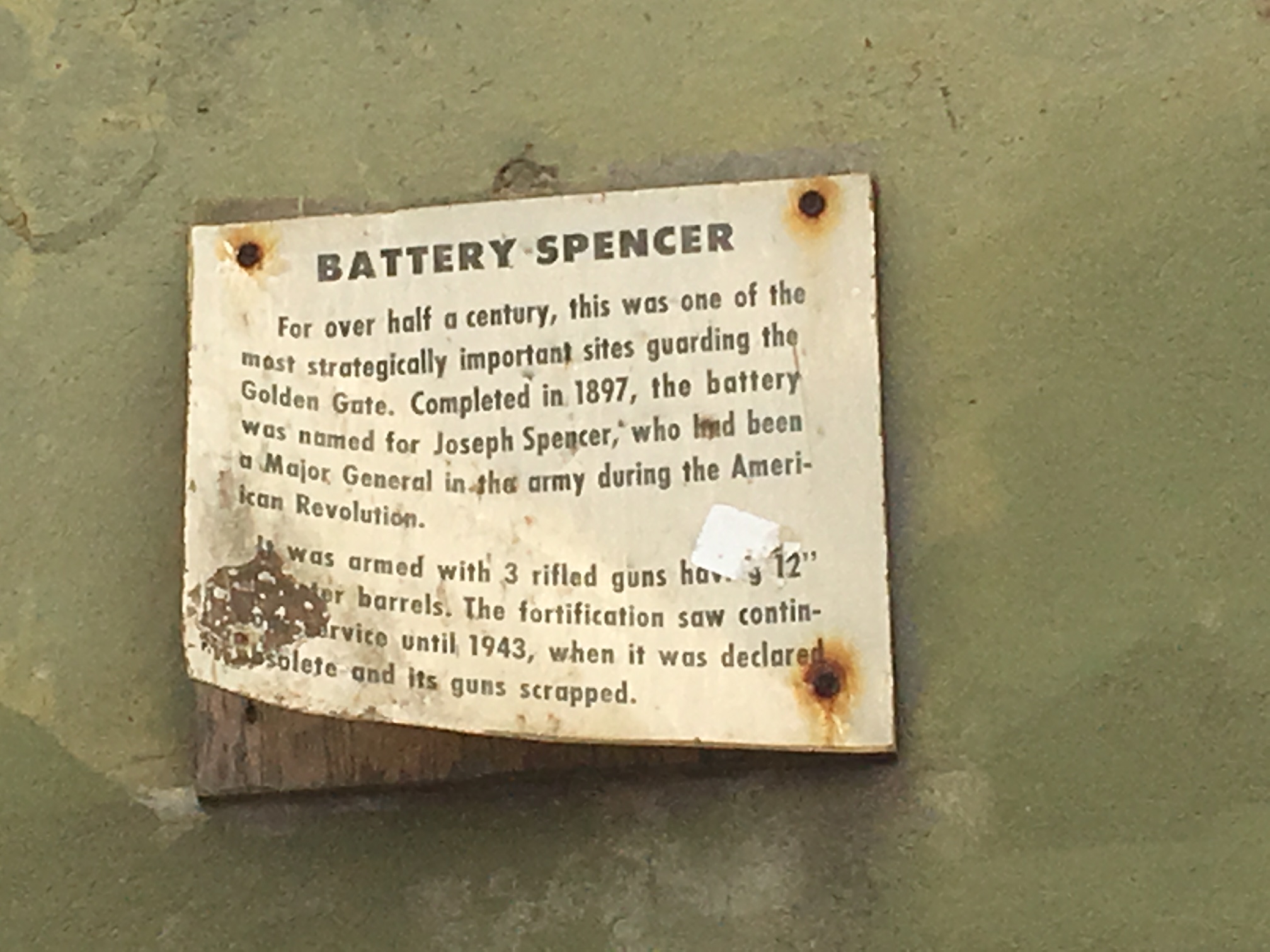 The view from the top of Battery Spencer. 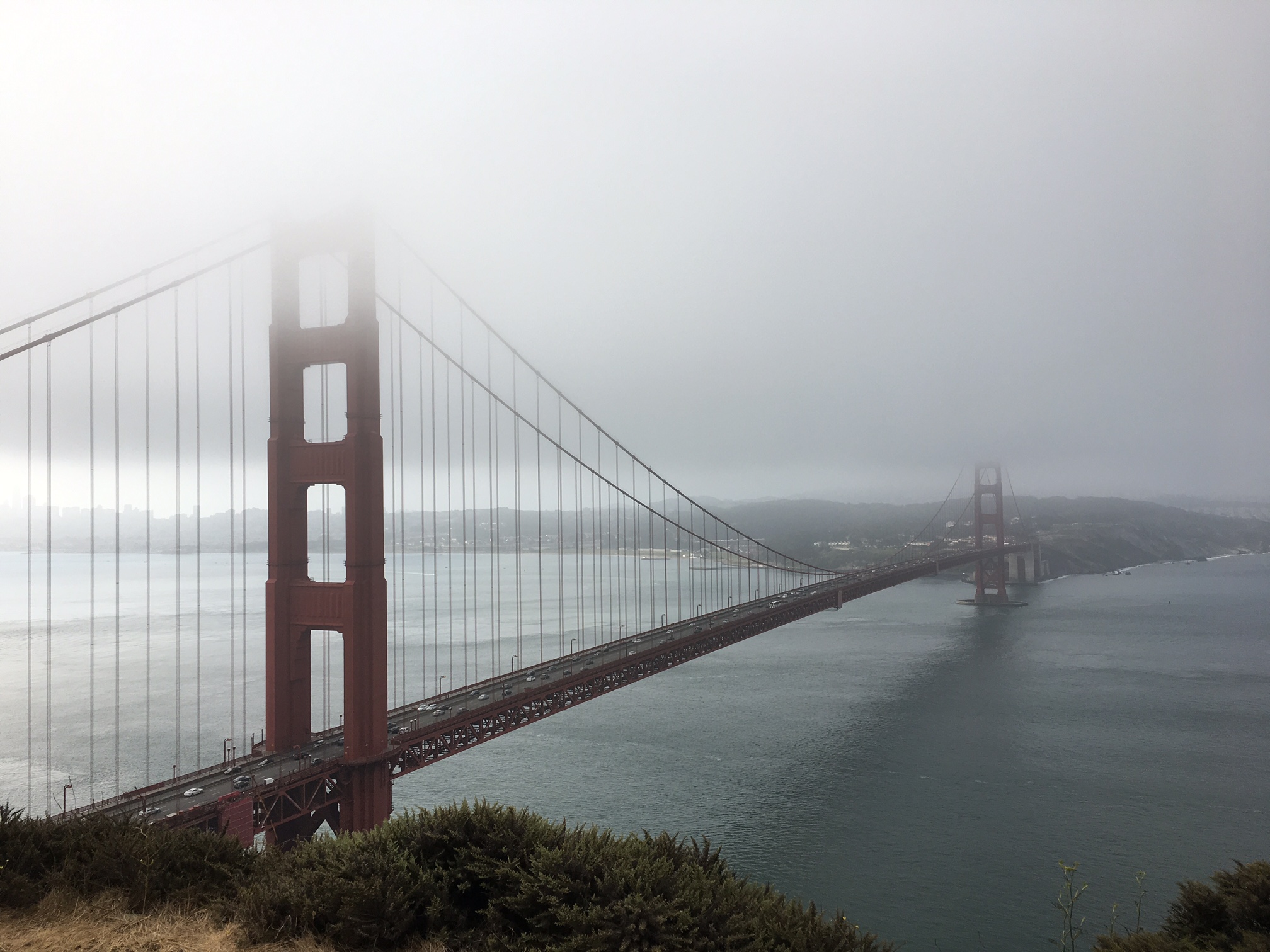 Battery Spencer is located on the top of the ridge closest to the Golden Gate Bridge. 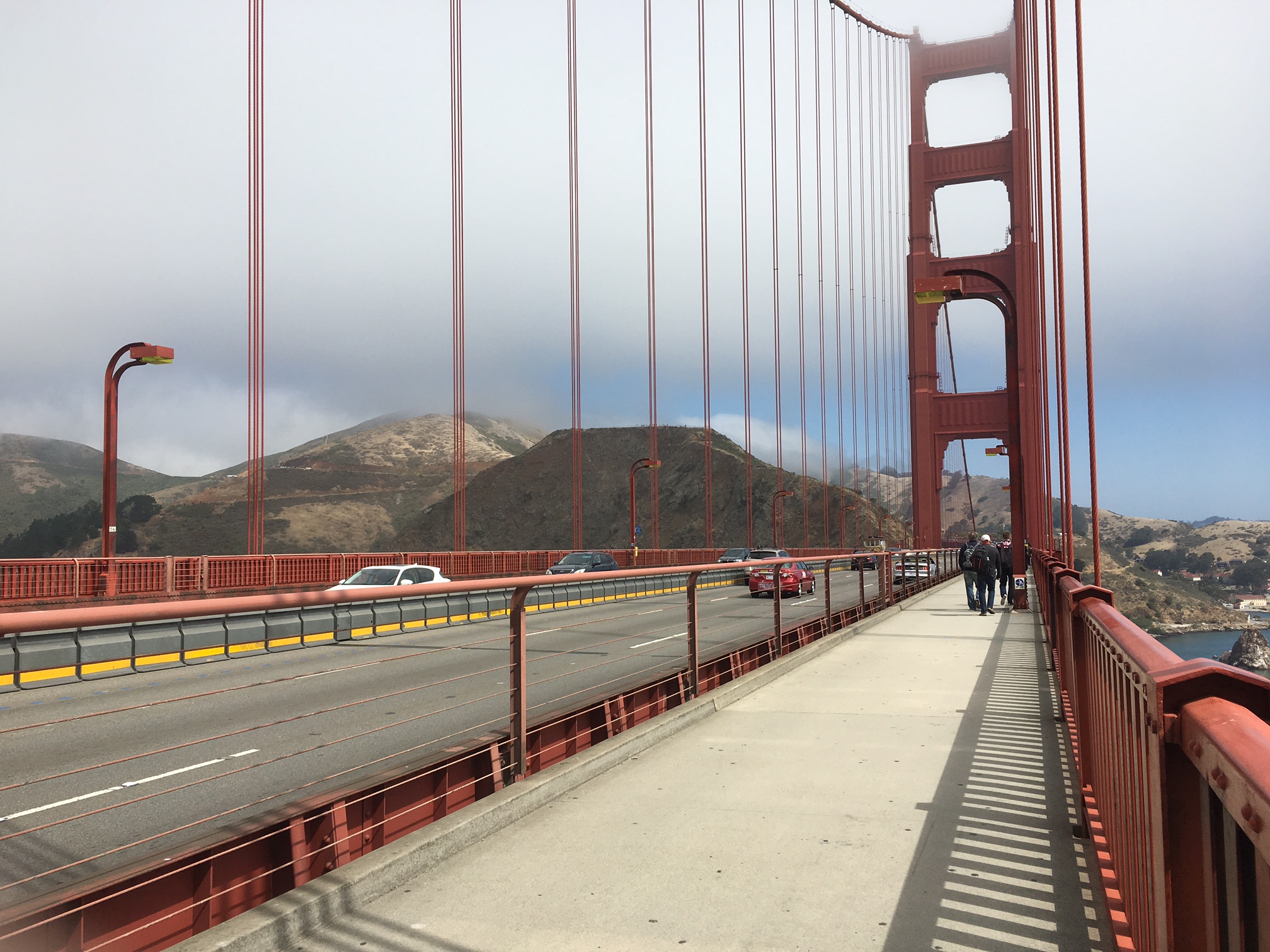 Battery Spencer built during a period of rapid coastal fortification known as the Endicott Era. Following a report indicating that America's coastal ports and cities might be vulnerable to attack, Secretary of War William C. Endicott made the construction of coastal fortifications a top priority from the mid-1880s to the early 1900s. Construction of this fort began in 1893 and was completed in 1897.  It was named after Major General Joseph Spencer, a Revolutionary War hero who died in 1779.

Upon visiting the battery, one can better understand how crucial this military installation was during its prime. From Battery Spencer, those stationed there would have been able to see any approaching threats. The three emplacements show where the mounted M1888 rifles were positioned; a sign on the side of one of the remaining buildings informs visitors that the battery included “three rifled guns with 12” diameter barrels.”

The cement buildings which remain are open for visitors to tour with reminders posted instructing all to remain on the designated paths. Battery Spencer is a part of the Golden Gate National Recreation Area but staff members are not always present.