This historical marker relates the experience of 32,000 enslaved people who came to Union lines as pro-Confederate forces fled the area after their defeat in the Battle of Port Royal in November, 1861. Mitchellville was a town organized at this location by former slaves in 1862 and named in honor of Ormsby M. Mitchell, the presiding Union general at that time. Residents of the town were granted small lots and labored on behalf of the Union war effort. They also participated in elections, selecting leaders of the local government that organized streets and schools. After the war, the former plantation owners returned and civil and military leaders acquiesced to their claims of land ownership. As a result, many of the Gullah fled their island or returned to work the plantations of former slave masters. 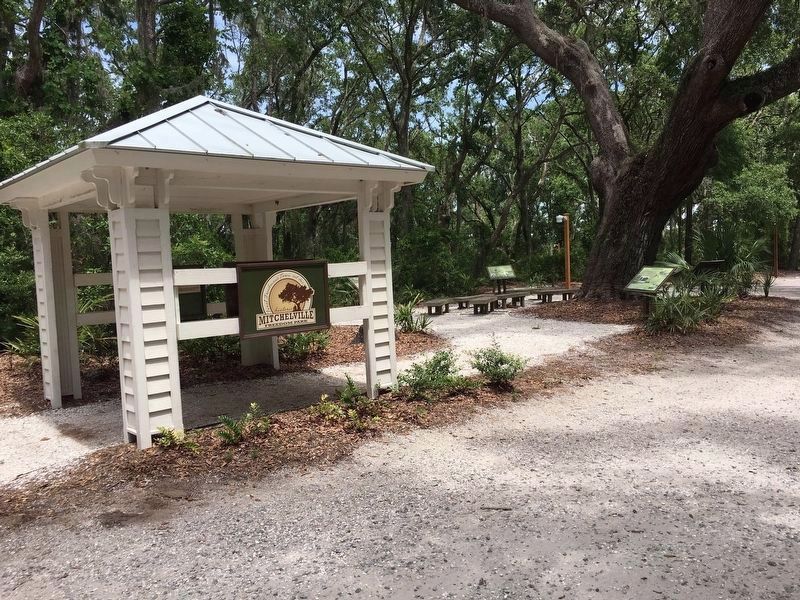 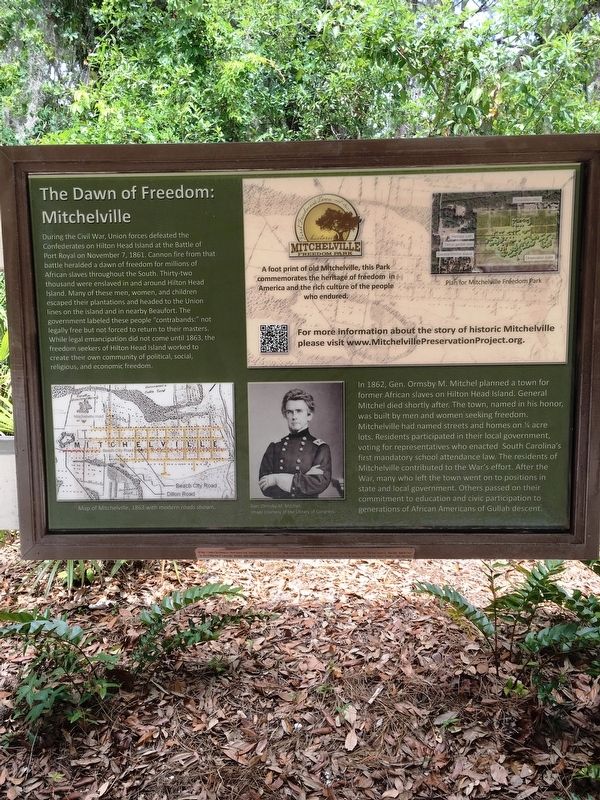 Gullah Island, better known as Hilton Head today, was home to many African American people who survived slavery, the Civil War, and the aftermath of Reconstruction. Today, the Gullah people still reside in South Carolina and remain steadfast in their culture and heritage. The West African heritage remains throughout the sea islands of North Carolina, South Carolina, Georgia, and Florida. As a result, the Gullah people have begun to spread their culture with those explorers willing to learn. The thriving culture has preserved their African heritage and dialect more than any other African American community in America.

Prior to the Civil War, enslaved people on the plantations surrounding Gullah Island labored each day cultivating rice, indigo, and cotton. Recognizing the Union Navy's superiority, and the near impossibility of defending the island from Union soldiers, sailors, and marines, many plantation owners fled the islands. Thousands of enslaved people remained and worked collectively to defend what they hoped would become their own lands. Union military leaders were legally required to return slaves to their masters in 1861, but they generally declined to do so unless Southern plantation owners appealed directly. By 1862, Congress passed laws stating that slaves who made it to Union lines would be considered contraband of war. IN other words, these people were not legally free but because their labor would aid the rebellion it was also illegal for them to be returned to their master. Regardless of the law, Union military leaders allowed the status quo to remain and thousands of legally enslaved people on the islands lived as if they were free. The Gullah people on these islands operated the plantations and sold items to the military.

The former slaves were granted freedom under the 13th Amendment but the North acquiesced to the return of former slave owners. As a result, many of the former slaves worked the same plantations for negligible wages. In recent years, the developments of the resorts have increased in property value and threaten to push the Gullah people off the island. Despite these obstacles, the descendants of the Gullah who remain work to preserve their customs and heritage.