Residing in Forsyth Park of Savannah, Georgia is a Confederate monument with a soldier “facing his enemies” in the North. The cornerstone of the monument was dedicated in 1874 and the monument was dedicated in 1879. The monument is emblematic of both the racial and regional animosity that white Southerners expressed in the Civil War and Reconstruction eras. The monument is controversial today because unlike many Confederate monuments that were dedicated at cemeteries, this statue was created as a celebration of the white South's rejection of the goals of Reconstruction. The park is named in honor of John Forsyth, the 33rd governor of Georgia who served as Secretary of State under Andrew Jackson and Martin Van Buren. 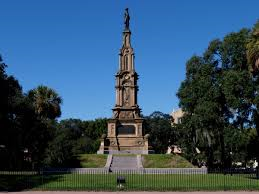 Organizers who developed this monument went to great lengths to avoid using any material or labor from the states that supported the Union in the Civil War. The monument was created in Nova Scotia and shipped directly to the city and oriented towards the North as a symbolic gesture of defiance. The monument is flanked by sculptures of Major General Lafayette Mclaws and Brigadier General Francis S. Bartow. It also includes a portrayal of a weeping widow surrounded by angels.

The “Savannah’s Ladies Memorial Association” initiated and led the effort to create the monument. They raised funds from donors and used their strict rules against Northern material or labor to help garner enthusiasm from white Southerners who were eager to celebrate their rejection of Black suffrage and other laws that had been imposed upon the South following the Civil War. The monument was not allowed to be made from any northern materials, nor could it touch the ground of the north. Northern men were also not allowed to be in the process of making the monument.

The original design for the monument consisted of two Victorian statues that represented judgment and silence. That design was not highly favored and the two sculptures representing silence and judgment were placed at other locations in Savannah. The statue representing silence is now at the Laurel Grove Cemetery in the section dedicated remember the soldiers from Savannah killed in Gettysburg. Judgment went to a different cemetery in Thomasville, Georgia.

Although the monument still carries a controversial message, the soldier continues to look towards his enemy and efforts to remove the sculpture from Forsyth Park has not received the kind of support that has occurred in other Southern cities that dedicated Confederate monuments in a spirit of defiance between the end of Reconstruction and the early 1900s. The park is full of beautiful monuments that pay tribute to more positive aspects of Southern history, including the generosity of many civic leaders. There are also monuments to local Marines who lost their lives in World War II and a monument honoring veterans of the Spanish-American War. The center of the park holds a fountain which has become one of the most popular places in the city for photographs.