The 54th Regiment Massachusetts Volunteer Infantry Plaza is a small memorial park situated on the site of the regiment’s former recruiting station in New Bedford. The 54th Infantry was the first regiment of African Americans recruited to serve the Union in the North. The unit is best-known for their valiant record in battle as depicted in the Hollywood movie Glory. The plaza was dedicated on February 12, 1999.

Archway at entrance to plaza 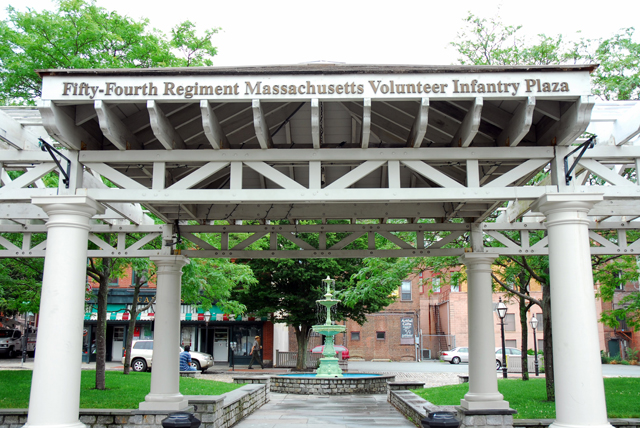 Mural on the side of Freestone's Restaurant 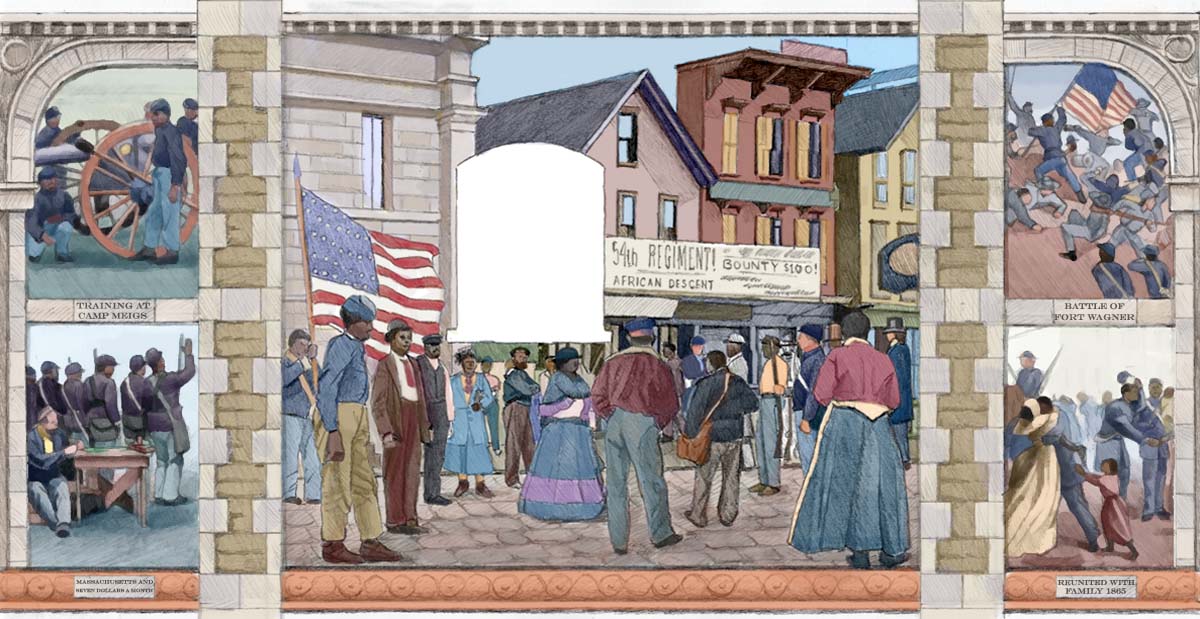 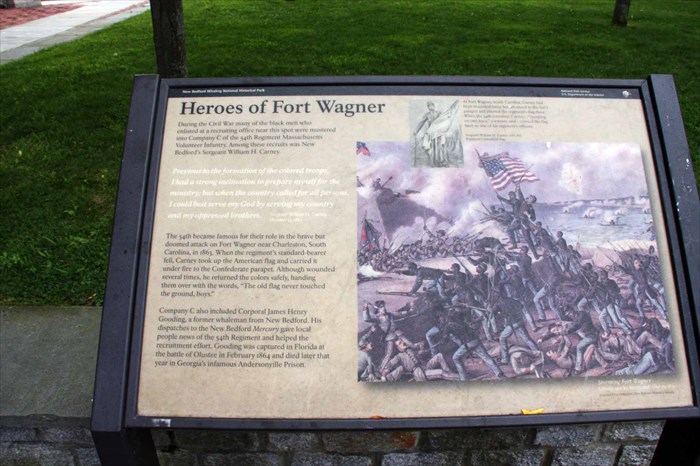 The 54th Regiment Massachusetts Volunteer Infantry Plaza commemorates the contributions of the Civil War’s 54th and the 55th Regiments, the 5th Calvary and the Navy men of color from New Bedford.  The site consists of a small park located at the corner of William Street and Acushnet Avenue in New Bedford, Massachusetts.  At the entrance to the park, there is a water fountain and a four-columnned square archway.  There are several signs which line the sidewalk leading to the plaza. They tell the story of the 54th Regiment.  One of the plaques, detailing their historic battle at Fort Wagner, is pictured above.

The 54th Regiment Massachusetts Volunteer Infantry was the first army regiment of Black men that was commissioned in the North, during the American Civil War.  On January 1, 1863, President Abraham Lincoln issued the Emancipation Proclamation.  In it, he declared that any Black man found suitable to serve, shall be allowed to enlist in the Union Army and Navy. Massachusetts’ abolitionist Governor, John A. Andrew, issued the first call for Black soldiers a month later.  Free African-American men signed up to serve in the 54th Infantry Regiment from Massachusetts as well as neighboring states. There were some recruits from the Confederate states and even Canada as well.

The 54th Infantry Regiment was led by a white man, Colonel Robert Gould Shaw. Another memorial to Shaw and his brave regiment stands at the entrance to the Boston Common, across the street from the Massachusetts State House.  On May 28, 1863, a group of 1,007 Black soldiers and 37 white officers left Boston bound for Charleston, South Carolina. First, they headed to James Island and were defeated, losing 45 men. Just a few short days later, they moved on to Fort Wagner where they suffered tremendous losses, including the death of its commander, Colonel Shaw.

Sergeant William Carney is one of the few Black soldiers who approached the fame of Colonel Shaw. Carney was born a slave in Virginia but was freed after his father escaped to the North, then earned enough money to buy his family’s freedom and move them to New Bedford. Carney enlisted in the 54th Regiment when he was about 23 years old.  At the siege of Fort Wagner, the unit’s flagbearer had been killed.  Carney courageously grabbed the flag from the fallen man before it hit the ground and continue to carry it throughout the battle. He was shot several times.  At the end of the siege, he declared to his fellow soldiers that their flag had never touched the ground!  Carney became the first Black man to receive the Congressional Medal of Honor for his heroism (although the medal wasn’t awarded to him until 1903).

Across the street from the Plaza, a beautiful mural was commissioned to adorn the side of a restaurant (Freestone’s Restaurant). The artist, a young man named Jared Bader of Philadelphia, was commissioned by the New Bedford Historical Society and the Whaling History Alliance to depict the contributions of Black men and women in New Bedford.  It features the men of the 54th Regiment and the old recruiting station, as well as pictures of free Black men and women in New Bedford after the war.