Originally established in 1830, the Tannehill Ironworks was one of several sites in Alabama that supported the state's booming manufacturing industry during the 19 the century. It was also a key source of ordinance and everyday items, such as pots and skillets, for the Confederate Army during the Civil War. Today, the site, which was established as 1,500 acre park in 1971, features the two enormous furnaces built in 1859 and 1863, respectively, and 45 historical buildings that have been restored and moved to the park. These include a 1858 cotton gin house, a residence called the Edwards House, and a replica of a grist mill that was here from 1867 to 1931. In addition to the historical site, there are hiking trails, camping sites, a museum showcasing the history of the iron industry, cabins for rent, a pioneer farm, and picnic areas.

One of the huge forges at Tannehill Ironworks Historical State Park, which was established in 1971. 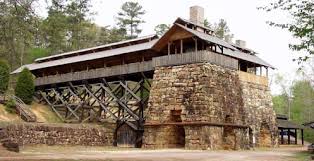 Iron ore was found on Roupes Creek in 1830 by Daniel Hillman, a native of Pennsylvania. He built a forge. Unfortunately, he passed away in 1832. The property was sold to Ninian Tannehill in 1840 to supplement his farming income. In the 1850s, ownership passed on to a man named John Alexander. Slaves, of course, did much of the grunt work, digging up iron ore nearby and brought it to the forge. A tram was eventually built to serve this purpose.

The furnaces seen today were built with sandstone rocks slaves cut and transported to the site. The furnaces were designed by Moses Stroup, who would later build the Oxmoor Furnance in Jefferson County.

The furnaces were in constant operation. At peak use, they could produce 22 tons of iron per day. The fuel for the furnaces were trees; over 3,400 acres of trees in the surrounding area were cut down during the 35 years the ironworks were in operation. All of this came to a fiery end when on March 31, 1865, a contingent of Union soldiers burned down the entire site.