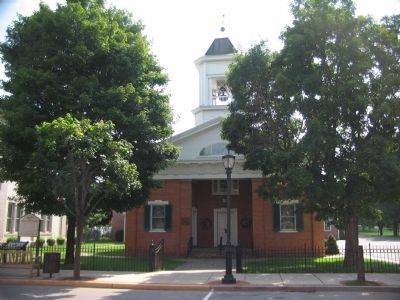 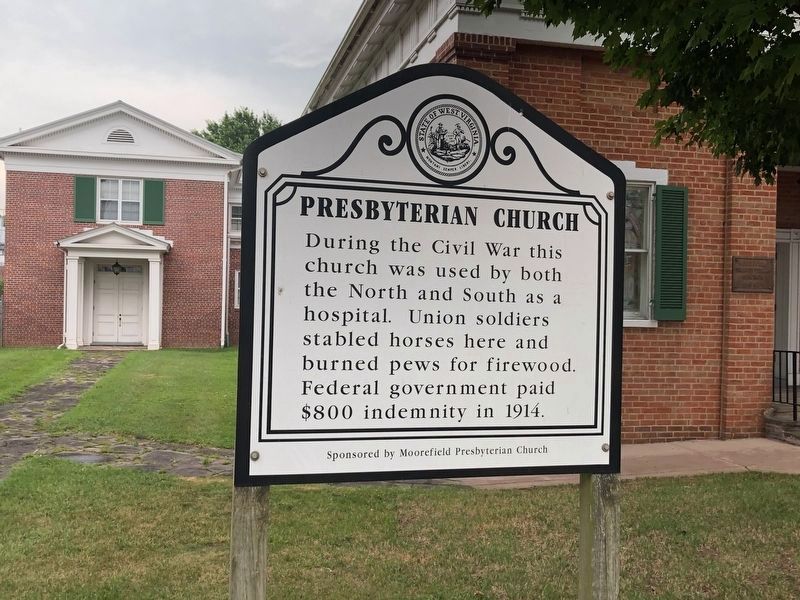 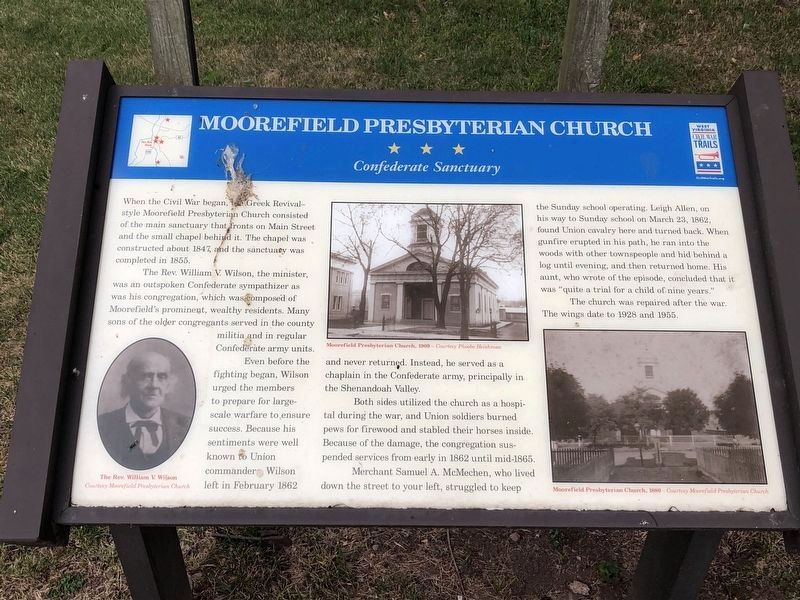 Now located at 109 South Main Street in Moorefield, the Moorefield Presbyterian Church first began as a small congregation called Concrete in 1782, which was housed in a log cabin near its present location. Reverend Moses Hoge was the first minister, establishing a grammar school for supplemental income and to spread literacy in the area. In 1784, Hoge, led opposition at Virginia's General Assembly in order to prevent tax support for Christian Churches proposed by Patrick Henry. After much debate, Hoge was appointed to draft an explanation of the Presbyterian Church's position and insistence on religious freedom. The passage of the Religious Liberty statute quelled the debate, separating church and state for good in Virginia. The Reverend Moses Hoge left the South Branch region in 1787.

After his departure, the ministry was kept alive by a succession of ministers, such as Jacob Jennings, MD. Jennings taught classes on fundamental Christianity, becoming so popular that he was asked to fill the pulpit until his departure in 1792. In 1801, parishioners began requesting the establishment of a brick building, The Union of Hardy County. Yet, by 1822, the popularity of Presbyterianism was waning in the region, and the congregation boasted only a few members. Reverend William N Scott was able to reverse this trend, establishing three ministries which became separate congregations on April 22, 1837. The current building's construction began in 1847 and was dedicated by 1855. Used as a fire alarm until 1934, the bell atop the church's tower came from German-Swiss immigrants in Grant County, who had hoped to use the bell as the pinnacle of their own town hall. The bell announces services to this day. In 1855, the Church established a Sunday School with Judge JFW Allen as superintendent and Samuel A McMechen serving as secretary. By 1857, the Fort Pleasant Presbyterian congregation was dissolved with parishioners utilizing services at the Moorefield location. 1858 saw the erection of the manse which was abandoned by Reverend William V Wilson and his family during the Civil War. Both the Church and manse were occupied by both Confederate and Union soldiers.

By 1865, the community and congregation had been ravaged by the War. Yet, the Church slowly began to fill the pews and the Sunday School continued to flourish under the direction of Samuel Alexander, who served as superintendent for forty years. Dr. George White preached at many locations and oversaw the establishment of a new chapel in Fort Run. By 1880, the congregation had rebounded and community organizations sprang from the Church, such as, the YMCA, the Mite Society (a women's organization), and The Busy Gleaners (a children's organization). From the 1890s to the 1920s, the Church established and consolidated more community groups. This period also saw construction on the Town Church facilities, adding a steel ceiling and stained-glass windows. Later, new pews, heating system, and individual communion set were added. The Women's Auxillary was founded in 1920 with Martha Gilkeson as president; during WWII, this group helped two British refugees, Julian Pritchard and Eric Sanders, making “Bundles for Britain.” Indeed, the wives of the clergy and other elites held many positions of authority within the Church at this time, for instance, the outpost at the Tannery was overseen by Mrs. SO Hall beginning in 1926. The war years demonstrated the strength of the Church in the community. In June 1943, Reverend Allen Jones left the Moorefield congregation to participate in the war effort as a Navy Chaplain. The popularity of the Church's Sunday School had seen a rise in attendance and the need for a larger facility.

By 1920, membership in the Church had reached 256. In 1928, a new educational facility was added as well as the choir loft and grand pipe organ. These additions were costly and soon after their installation, the Great Depression hit. For years, the Women's Auxillary labored to pay off the debts incurred by the construction. Thanks to their efforts, on September 30, 1942, the Church held a note-burning. The Christian Endeavor Society founded by DR. REL Hackney and continued by Mrs. SO Hall, was able to invigorate youth participation in the congregation. Daily Vacation Bible Schools were held at outposts and at the Town Church location with youth ministers. The Sunday School continued to grow, necessitating another expansion of facilities in 1954. In 1964, the entire chapel was completely restored. In the 1980s, the Chapel and Manse were also restored which included removing white paint from the brick facades. The Presbyterian Church was instrumental in providing relief after the devastating 1985 flood which also damaged much of the newly restored facilities. Donations from church members and fellow congregations throughout the United States allowed for flood clean-up. Today, the Town Church houses one of the only functional pipe organs on the East Coast.