Located in the heart of the Castro District, Pink Triangle Park contains fifteen granite pillars that memorialize the fifteen thousand LGBT men and women who were killed by soldiers following Adolf Hitler's orders during the Holocaust. Nazi soldiers required gay, lesbian, and transgendered persons to wear pink triangles as a symbol of their alleged inhumanity during the Second World War and many were executed in concentration camps throughout Europe. A triangle columnn was built for every 1,000 gay men and women who lost their lives.

This plaque offers information about the memorial park which was dedicated in 2001. 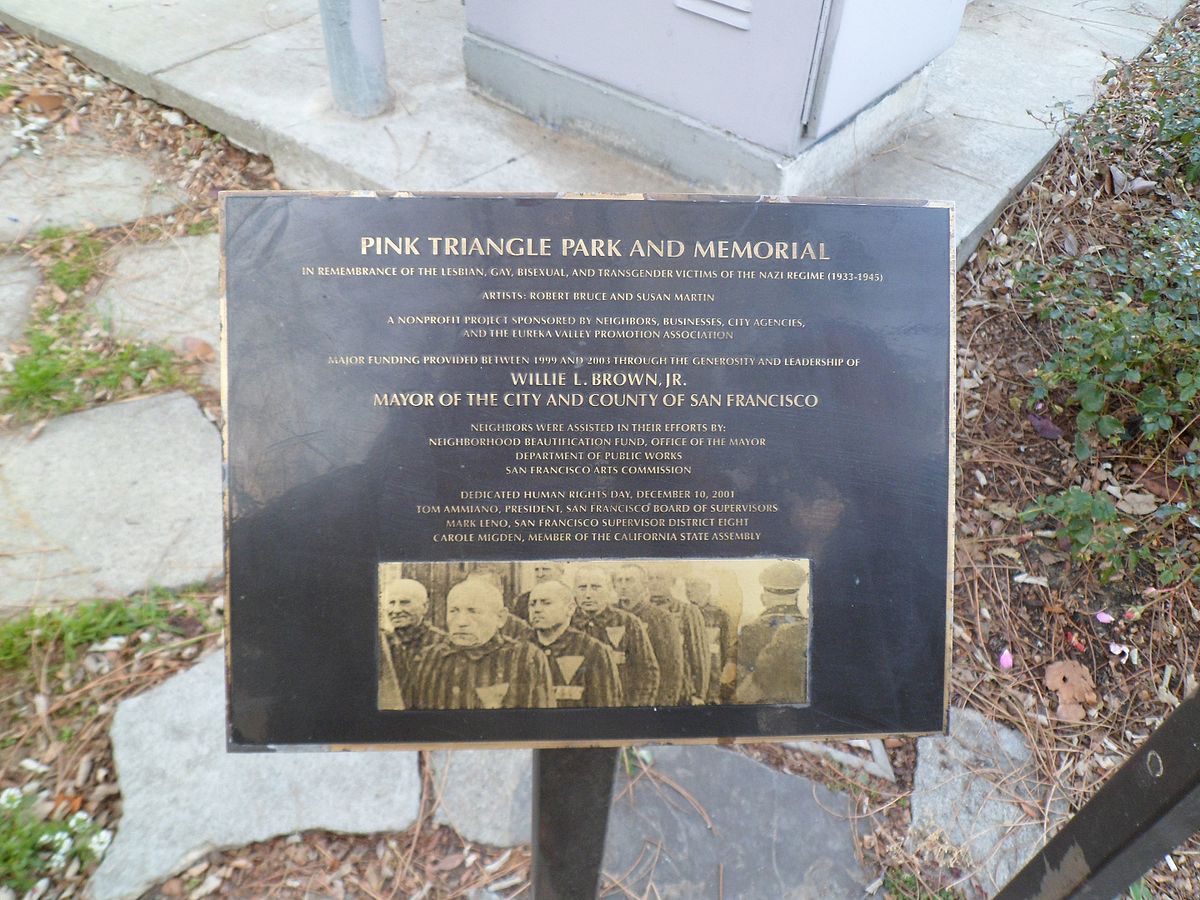 Eac of the pink triangles represents a thousand people who were murdered by the Nazis owing to the sexual orientation or status as transgender persons. 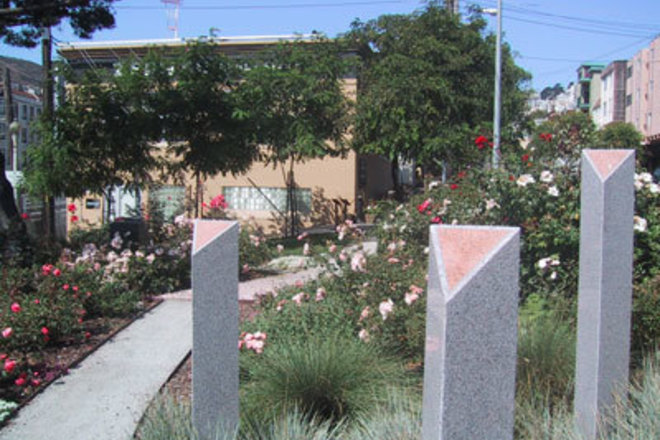 The triangular park features fifteen triangular white granite pylons with pink triangles embedded into their peaks. Each of these pillars represents a thousand persecuted and murdered gay, lesbian, and transgender people. The pylons are arranged in the shape of a triangle and surround a larger pink quartz triangle in the middle of the park. The triangle is positioned to point towards the Harvey Milk Plaza.

The adjacent plaza memorializes Harvey Milk, the first openly gay person to be elected to public office in California. A 20×30-foot rainbow flag that can be seen from some of the farthest edges of the city. The shape of the park and its pylons acknowledge the pink triangles that gay men and women were forced to sew onto their clothing in Nazi Germany in an attempt to isolate and shame them.

The park seeks to reclaim the pink triangle as a symbol of celebration, rather than shame, for those LGBT lives. The pink triangle has since become a symbol of strength for the LGBT civil rights movement. The Castro/Eureka Valley Neighborhood Association, which commissioned Pink Triangle Park, explains its intentions: ‘This is a civil rights park… Throughout history, there are times when prejudice overwhelms all reason and humanity… Pink Triangle Park and Memorial is a place of remembrance, reflection, and education.’

The park was designed by artists Robert Bruce and Susan Martin. In a statement about the park, they claim: ‘We wanted the sculpture to be contemplative. We wanted to mourn the dead (past), to celebrate the living (present), and to hope for those to come (future).’ The artists express their hope that the park’s visitors will ‘Respect each other as this sculpture respects the site… Contemplate the softness of the plants and the firmness of the granite… Locate the softness and the firmness within themselves… Remember that gay men wore pink triangles, lesbians wore Black triangles, gypsies wore brown triangles, Poles wore blue triangles, social democrats, and other political prisoners wore red triangles, and Jews wore yellow stars… [and] think about how persecution of any individual or single group of people damages all humanity.’