Stone marker of the former location of his house. 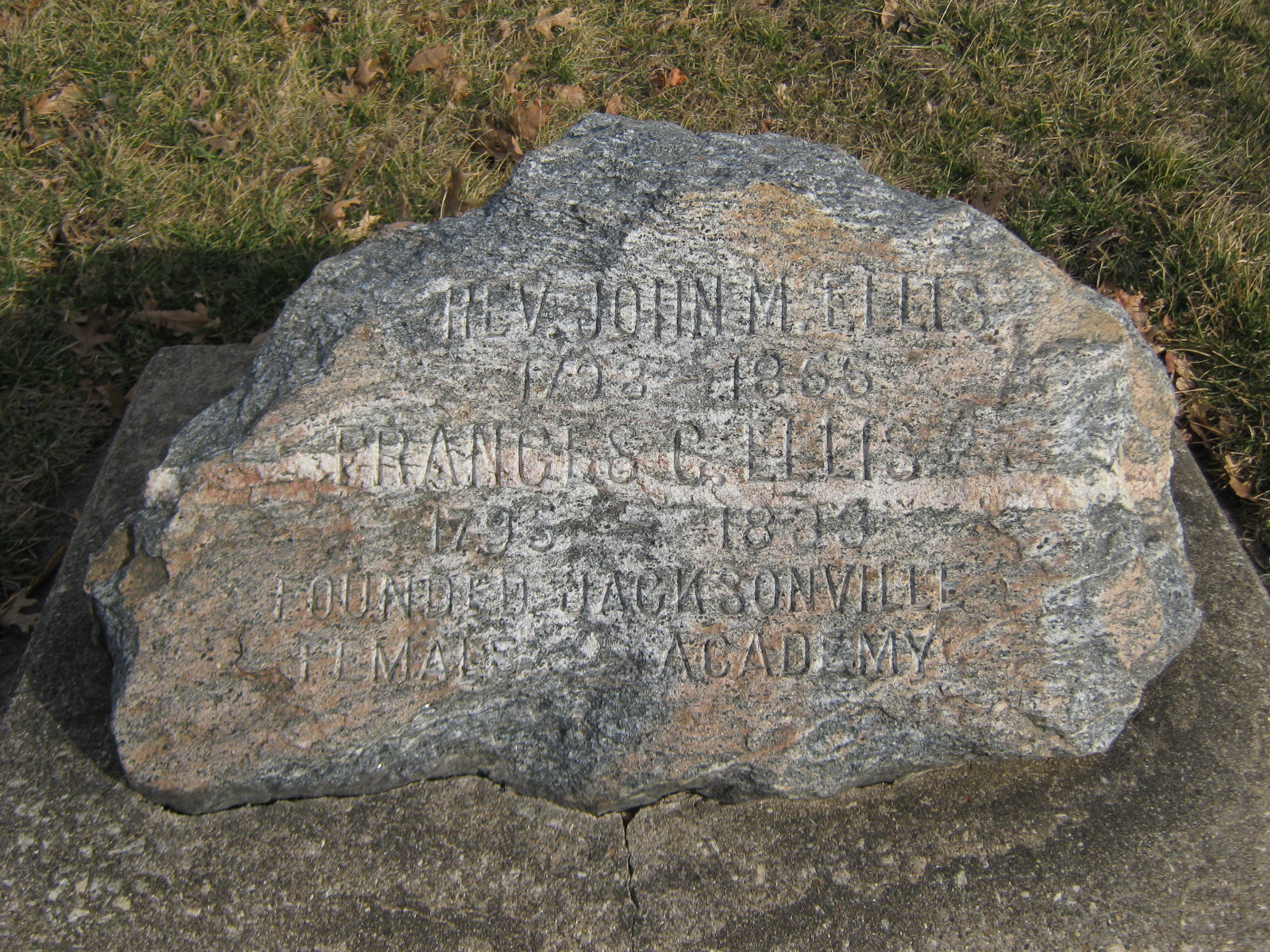 Lessons for the ladies

Ann Rutledge, the purported love interest of Abraham Lincoln, was making plans to attend the Jacksonville Female Academy when she died in 1835.

If Rutledge had not succumbed to typhoid fever, she most likely would have attended classes in the new Female Academy building that had been constructed at West Morgan and South Church streets.

The Female Academy opened its doors in 1833. The Rev. John Ellis, a Presbyterian minister who helped establish Illinois College in 1829, also had a hand in founding the Female Academy.

Ellis’ wife, Frances, also played a role in educating young women in pioneer Jacksonville. She conducted a school in the Ellis home on West State Street, just west of Church Street, which is considered the forerunner of the Female Academy.

“Mrs. Ellis was a woman of high character and culture, zealously devoted, as was her husband, to the cause of education,” said the Rev. Livingston M. Glover, longtime pastor of the First Presbyterian Church of Jacksonville.

The academy’s first home was in a rented building at West State and West streets, where the Journal-Courier offices are now located.

Sarah Crocker came from New Hampshire to serve as the academy’s first teacher and principal. Thirty-one students were enrolled in the school during its first term, which began in May 1833. The Jacksonville Female Academy is said to be the first women’s school for secondary education in Illinois.

The first real home for the academy was in a brick building that went up in 1835. It was furnished with furniture made by IC students.

During the 1800s, the academy and IC, which only educated men at the time, maintained a close association. The schools had separate boards of trustees, but many of the same men were on both boards. They had separate faculties, but again, many instructors served both schools.

Academy women were allowed to attend lectures at IC, and IC men often invited academy women to social functions. However, academy administrators frowned on too much fraternization between the sexes. The academy women were well chaperoned. In fact, such close watch was kept on the students who lived at the academy that IC men used to say that the initials “JFA” stood for “Jail for Angels.”

Several additions were made to the original academy building in the 1800s, and, in 1903, the academy merged with IC. The academy building, known as Academy Hall, was then used as a dormitory for IC’s female students.

Academy’s Hall’s library room was the location of the organization of Sigma Phi Epsilon, an IC women’s literary society, in 1916. The building was last used as an IC women’s dormitory in the early 1930s.

Before Academy Hall was demolished in 1936, some Jacksonville residents called for its preservation, in view of the role the academy played in Illinois’ educational history.

“Thousands of young women owed their education to [the Jacksonville Female Academy] and its staff of instructors,” wrote a Jacksonville Daily Journal editorial writer around the time Academy Hall was razed.

“The influence of the school and its graduates was widespread. It is with full realization of its history and traditions that Jacksonville will watch [the building] go, as Jacksonville more than 100 years ago saw its beginning.”