Sacramento’s Tower Bridge, also known as the M Street Bridge, is a vertical lift bridge that spans the Sacramento River and connects West Sacramento with the Capitol Mall at West Capitol Avenue. Designed with a Streamline Moderne (a branch of art deco) architectural style, the Tower Bridge initially accommodated both autos and trains when it was dedicated in late 1935. Its two towers stand 160 feet tall and permit the bridge deck to be raised, vertically, 100 feet above the water’s surface to allow for the passage of river traffic below. The Tower Bridge was added to the National Register of Historic Places in 1982. 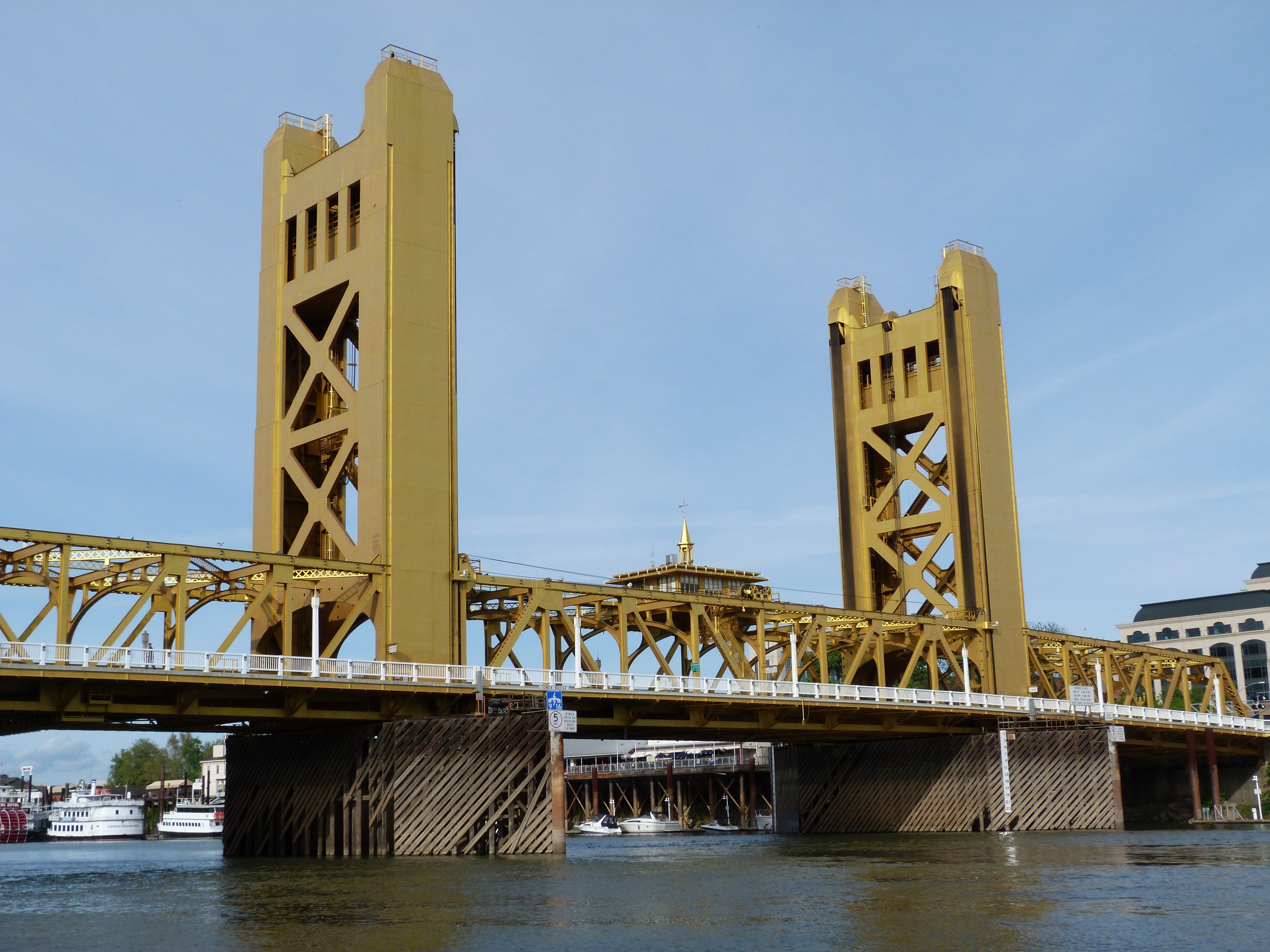 The span's bridge deck in the raised position to allow river traffic to pass beneath. 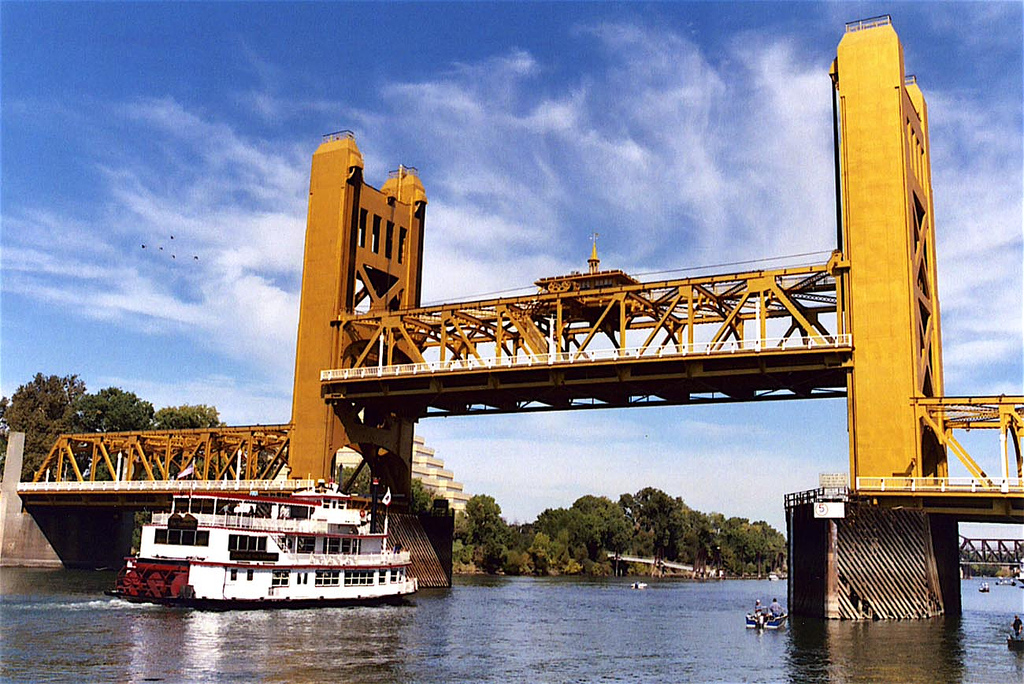 Historical information greets pedestrians as they cross the Tower Bridge. 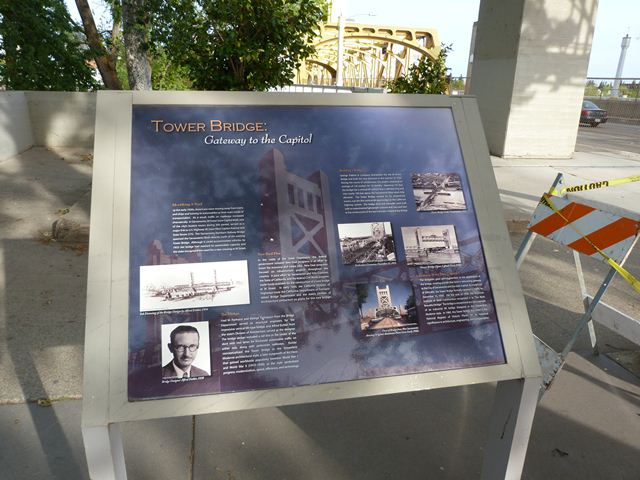 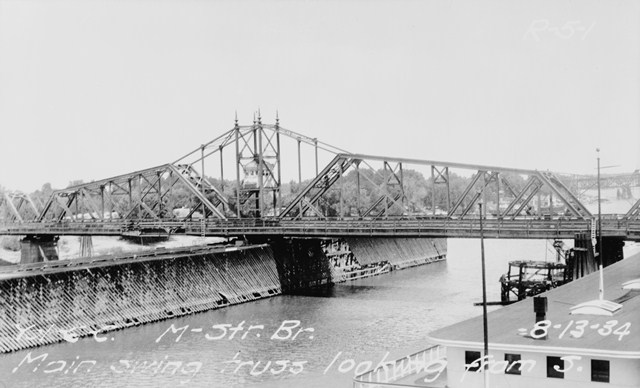 An aerial shot of the Tower Bridge, Sacramento River and the state capital. 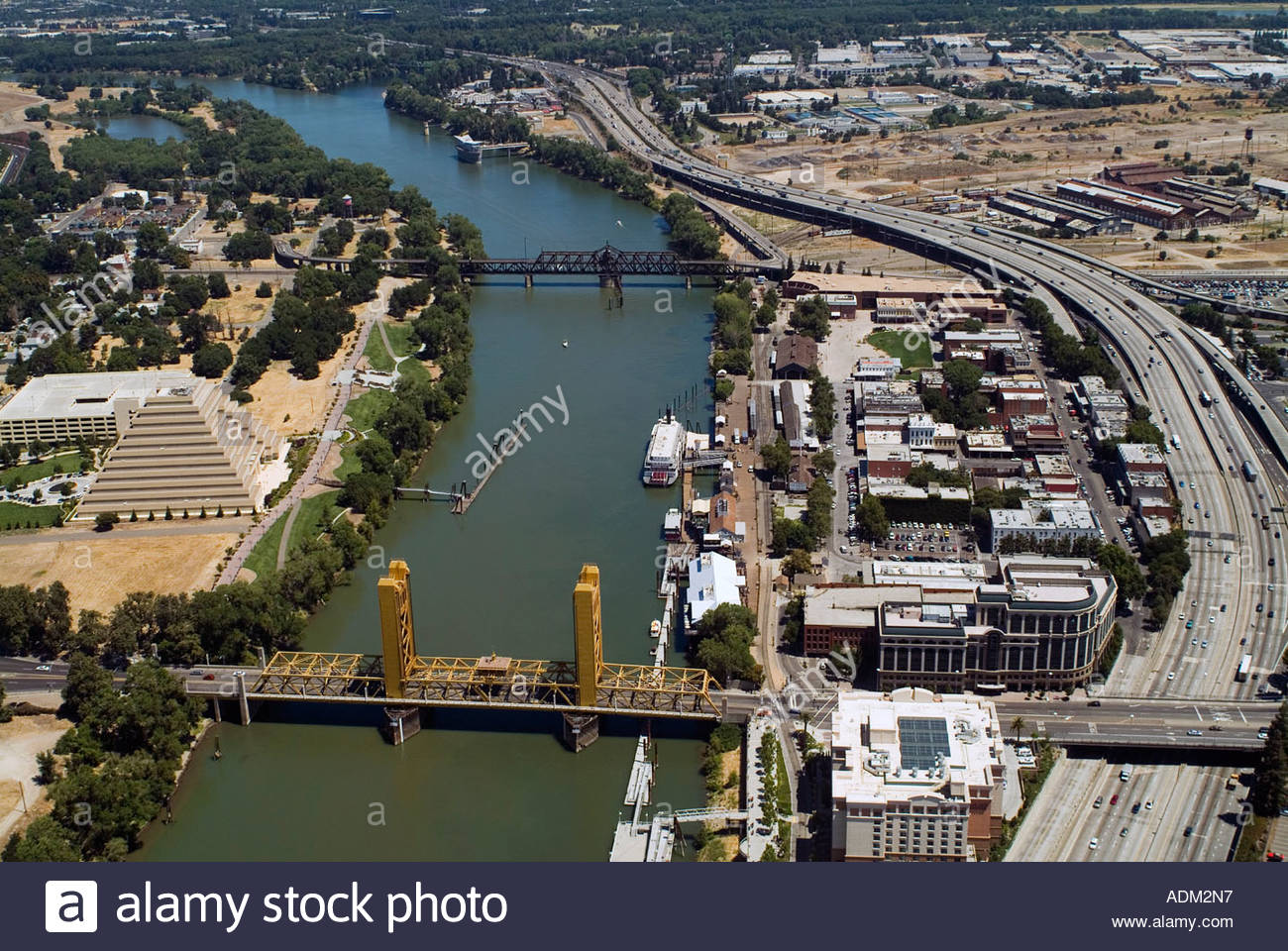 By the late 1920s, Sacramento residents and city leaders realized that the old M Street Bridge, built in 1911, was no longer sufficient for their transportation needs.  The 1911 bridge was a through truss railroad only bridge that was built by the Sacramento Northern Railway.  It had two, nine-foot roadway sections added to it later.  However, as the 1930s dawned, the bridge had become too small for the needs of the capital city.  As a result, the city contracted with architect Alfred Eichler, who had moved to San Francisco from Missouri in 1896, to design a new span.

Since the bridge was a main approach to the capitol building, the city requested an aesthetically pleasing design.  Construction on Eichler’s design began in 1934 and was conducted by George Pollock and Company for a cost of just under $1 million.    During construction, auto traffic was diverted to the I Street Bridge while rail traffic crossed the Sacramento River via a temporary timber and steel bridge.  The Tower Bridge was dedicated by Governor Frank Merriam on December 15, 1935 and it became the first vertical lift bridge in the California Highway system.

The rivet-connected, Pratt through truss bridge was constructed at a total length of 738 feet with a central lift span (the section that rises) of 209 feet after the old bridge’s center pier was removed.  The original deck had a 13-foot center section for rail traffic with single auto lanes on either side.  Its two towers contain counter-weights that are employed to lift and lower its 1,100-ton central section at a rate of 1 foot per second when needed.  Its counter-weights and chains are concealed within the towers by the use of solid steel plates.  Its tender house and machinery room, with decorative copula, is located atop the lift span

The bridge was originally painted a silver-aluminum color and was repainted a yellow-ochre in 1976.  In the early 21st century, nearby residents voted on a new color scheme and the people chose all gold.  However, some have complained that the final color is more muted than desired.  The concrete pillars were originally painted a sky-blue.  However, that has long since worn off and has yet to be repainted.  The railroad tracks, median, and switching and locking mechanisms were removed in 1963 while the trolley lines had been removed at an earlier date.  After the rail lines were removed, the desk was resurfaced as the bridge became a car, bicycle and pedestrian span.