Listed on the National Register of Historic Places, Rothko Chapel is a true architectural masterpiece. It was designed by one of the great American artists of the 20th century: Mark Rothko, who was born to a Jewish family in Russia. It was built in 1971, a year or so after Rothko died. Rothko was among the great artists who espoused modernism, the philosophy that emerged after WWII that promoted, among other things, religious reconciliation and social justice. As such, the chapel, which is in the shape of a Greek cross, is an excellent example of modernist architecture. It also serves as an important cultural and religious institution. As a non-denominational chapel, it is open to anyone of all faiths (as well as non-believers) to worship, talk to others of different faiths, meditate, or just to sit silently. There are also 14 of Rothko's paintings inside. It receives 90,000 visitors each from around the world.

Rothko Chapel was built in 1971 and is an important ecumenical and social justice center in Houston. 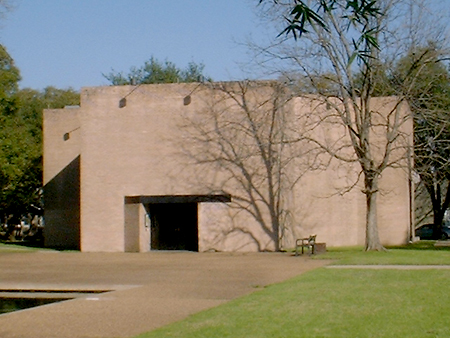 The chapel was commissioned by John and Dominique Menil, a couple who strongly believed in modernist principles and were staunch liberals. They wanted a place where people of all faiths could participated in religious exchange and discuss important social justice issues. They also bought the sculpture next to the museum, "Broken Obelisk", which was created by artist Barnett Newman. The Menil's believed it would serve as memorial to Martin Luther King and perfectly suited for the chapel grounds.