Sloss Furnaces produced iron for nearly 90 years, which gave rise to the city of Birmingham. Now recognized as a National Historic Landmark, Sloss Furnaces offers a glimpse into the great industrial past of the South with its web of pipes and tall smokestacks. Sloss received National Historic Landmark designation in 1981 and opened its gates in September 1983 as a museum of the City of Birmingham. Its collection consists of two 400-ton blast furnaces and some forty other buildings. Sloss Furnaces is currently the only twentieth-century blast furnace in the United States being preserved and interpreted as an historic industrial site. The dramatic scale and complexity of the plant’s industrial structure, machines and tools make the Sloss collection a unique contribution to the interpretation of twentieth-century ironmaking technology and presents a remarkable perspective on the era when America grew to world industrial dominance.

The only blast furnace in the United States that is actively being preserved and used as a historic site, Sloss Furnace is open to visitors and offers interpretive tours. 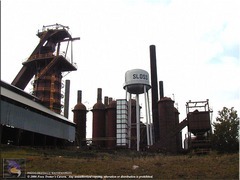 Nothing remains of the original furnace complex. The oldest building on the site dates from 1902 and houses the eight steam-driven “blowing-engines” used to provide air for combustion in the furnaces. The engines themselves date from the period 1900-1902 and are a unique and important collection—engines such as these powered America’s Industrial Revolution. The boilers, installed in 1906 and 1914, produced steam for the site until it closed in 1970.
Between 1927 and 1931 the plant underwent a concentrated program of mechanization. Most of its major operation equipment—the blast furnaces and the charging and casting machinery–was replaced at this time. In 1927-28, the two furnaces were rebuilt, enlarged, and refitted with mechanical charging equipment, doubling the plant’s production capacity.
About two-thirds of the historic structures on the site were stabilized using the bond funds approved by Birmingham voters in 1977. Parts of the site were also adapted for use as a center for community and civic events and for an innovative program in metal arts. Sloss now hosts concerts, festivals, and conferences, as well as workshops and exhibitions of metal art. By helping people form new attachments to the old furnaces, these programs keep Sloss an active and important part of the community, as it was for almost a hundred years.1