The Charles Q. Clapp Block, more colloquially known as the Hay Building, is an iconic “flat iron” style building in downtown Portland, Maine. It was constructed in 1826, having been designed by renowned Portland native architect Charles Quincy Clapp, who was responsible for a number of other influential and iconic buildings in the City of Portland. As of its acceptance onto the National Register of Historic Places in January of 1978, it had housed a pharmacy on its first floor continually since 1841, when pharmacist H. H. Hay opened one of his two pharmacies there. As of the creation of this article, the building now houses a number of businesses including a café.

The Hay Building in November of 1976, photograph by Frank A. Beard (public domain provided by NPS) 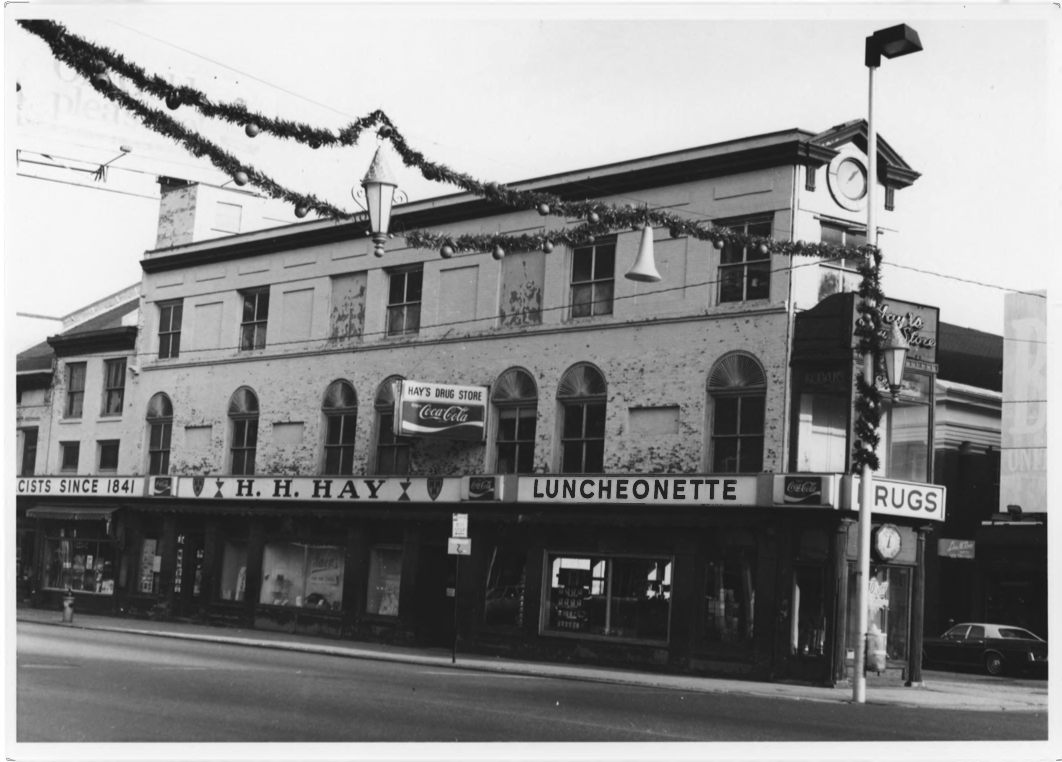 Photograph of a bottle of Hay's Antiseptic Air Freshener, provided by the Maine Historical Society 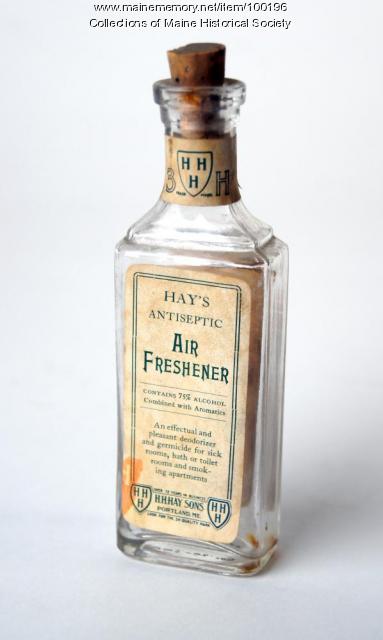 The Hay Building is a fascinating convergence point of some of Portland’s most influential people.  Having been designed by Charles Q. Clapp, who shaped much of Portland’s downtown throughout the 1800s, it was occupied by the influential pharmacist H. H. Hay, and then, in 1922, it was improved upon and expanded by none other than famed architect John Calvin Stevens.  In this way, the Hay Building bridges two generations of architectural and historical influencers in the City of Portland.

Charles Q. Clapp was born in 1799 to Asa Clapp, one of Portland’s most influential and wealthiest merchants of the 1800s.  Diverging from his father’s interests, Charles Clapp pursued real estate as a business and taught himself architecture and design.  In addition to designing the Hay Building in 1826, he also designed his own iconic home in the Greek Revival Style, which for decades housed the Portland School of Art.  Furthermore, he designed the Park Place Row Houses in 1848, the J. B. Carrol Mansion in 1851, the Seaman’s Club in 1866, and helped revive the commercial districts in downtown after the 1866 Great Portland Fire.

Being such an influential architect, it is notable that a building Clapp designed was later expanded by John Calvin Stevens.  John Calvin Stevens is one of the most recognized Maine architects and designers who solidified the Shingle style of architecture as one of the most characteristic Maine residence styles.  Stevens was recognized far beyond Maine, though, despite his work coming to characterize the imagery of the Maine coast.  His book written in cooperation with fellow architect Albert Winslow Cobb, “Examples of American Domestic Architecture,” was recognized internationally.  John Calvin Stevens designed a great number of Maine historical structures, many of which were in the Portland area.  These included structures such as the Nathan Clifford School, the State Street Congregational Church, and the Bay of Naples Inn (which was unfortunately demolished in 1964.)

Finally, the third actor of note intertwined in the history of the Hay Building is the man for whom the building is namesake, Pharmacist H. H. Hay.  Hay was a successful pharmacist in the Portland area, opening two large pharmacies, both, interestingly, located in flatiron style buildings.  The Hay pharmacy locations served large areas of Portland, and was in business for decades.

The building now houses a café, and is a popular gathering place for tourists and citizens alike.  It has been well-preserved, with the influences of both its iconic architects still visible to this day.