A.D. Porter and Sons Funeral Home was established in 1907 and is one of the oldest Kentucky businesses that is owned and operated by African Americans. The founder, Mr. Arthur D. Porter, Sr., was a leader of the community and a supporter of measures that supported education, job opportunities, and civil rights. Arthur Porter ran for mayor in 1921 with support from the black community but is best remembered for his role as a funeral home director. Businesses that provided personal services were important in the era of segregation, and black-owned life insurance companies, funeral homes, and cemeteries offered fairness, sensitivity, understanding, and dignity in an era when grieving black families could not always count on such treatment from white-owned businesses. Porter passed his business to his son, Woodford Porter, Sr., and the business is still in the family.

A.D. Porter Funeral Home dates back to 1907 and has been an important establishment in the black community of Louisville. 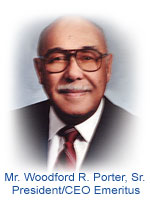 In 1907, Mr. Arthur D. Porter opened his business and catered to fellow members of the African American community of Louisville. Mr. Porter not only wanted to fight for equal rights for his community, but wanted to make sure they had a place to where they would feel comfortable saying their final farewells to their loved ones. People could grieve in peace while being able to shut out what was going on with civil unrest outside of the doors.

This compassion, this need to care and the urge and yearning to move forward was handed down to Mr. Porter’s son, Woodford Porter, Sr. To be a trailblazer ran through the Porter family blood. Mr. Woodford Porter, Sr. accomplished many great things in his life. He broke barriers, fought for what he believed in and went down in Kentucky history as a pioneer whom helped to spearhead a movement. Some of Mr. Porter’s accomplishments include but not are limited to, being the first African American elected to the Louisville Board of Education. He also was the first African America board member for the YMCA Metropolitan Board as well as the first African American President for the University of Louisville Board of Trustees. All of this was done while being a mortician in his family business.

Mr. A.D. Porter and Mr. Woodford Porter, Sr., were not only business leaders, but they were civic leaders as well.  A father looking to save his community and wanting to help out anyway possible. A father whom wanted what was best for his children and his fellow man. A father wanting to be a voice for so many that didn’t have a voice at the time. Then, a son whom took these teachings and lessons and never looked back. Becoming the first African American in Louisville, KY to accomplish and be recognized for so many things. All of this once again, while running a business that is there for people in their time of need.