“Damn the torpedoes! Full speed ahead!” This public square honors Admiral David Farragut, a lifelong naval officer who is most famous for making this bold declaration after other Union ships were withdrawing from their attack on Mobile Bay. After one ship was destroyed by a Confederate mine, Farragut ordered the rest to move forward and guided them through the minefield before successfully capturing the bay. The square is dominated by the central statue of David G. Farragut which was cast in bronze by artist Vinnie Ream. The statue was commissioned by Congress at a cost of $20,000 on April 16, 1872. The statue was dedicated by President James Garfield on April 25, 1882. 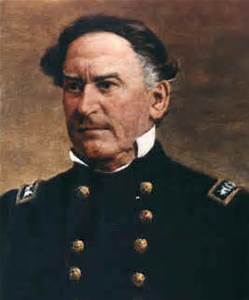 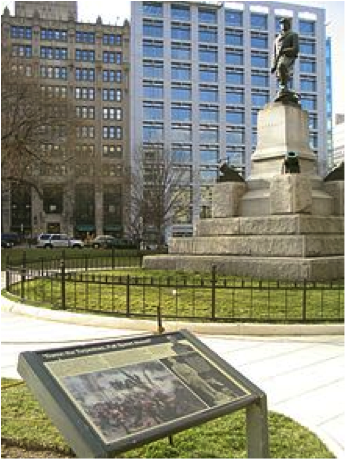 David Glasgow Farragut: Admiral in the Making-Click the link below for more information about this book 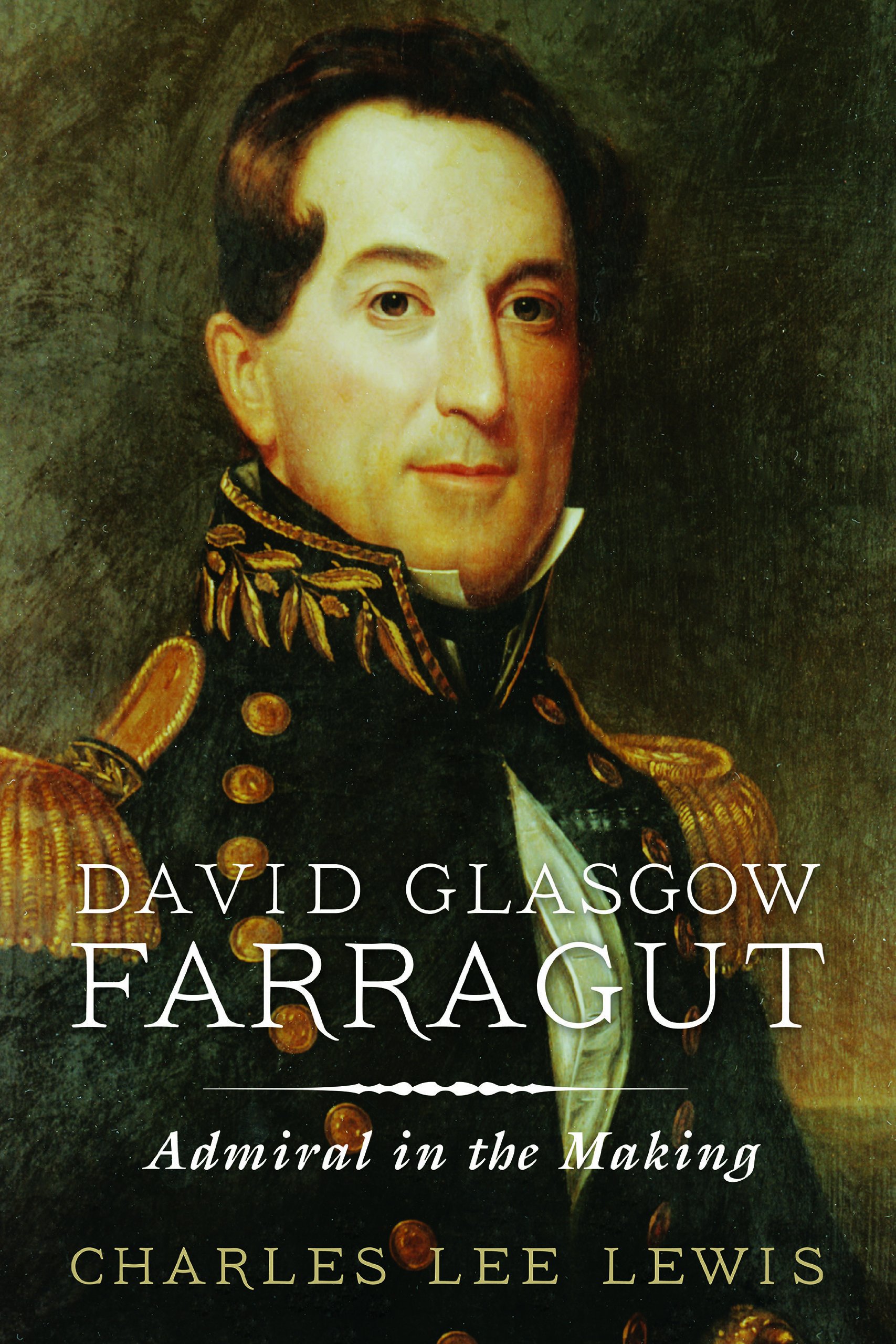 James McPherson, War on the Waters: The Union and Confederate Navies, 1861-1865-Click the link below for more information about this book 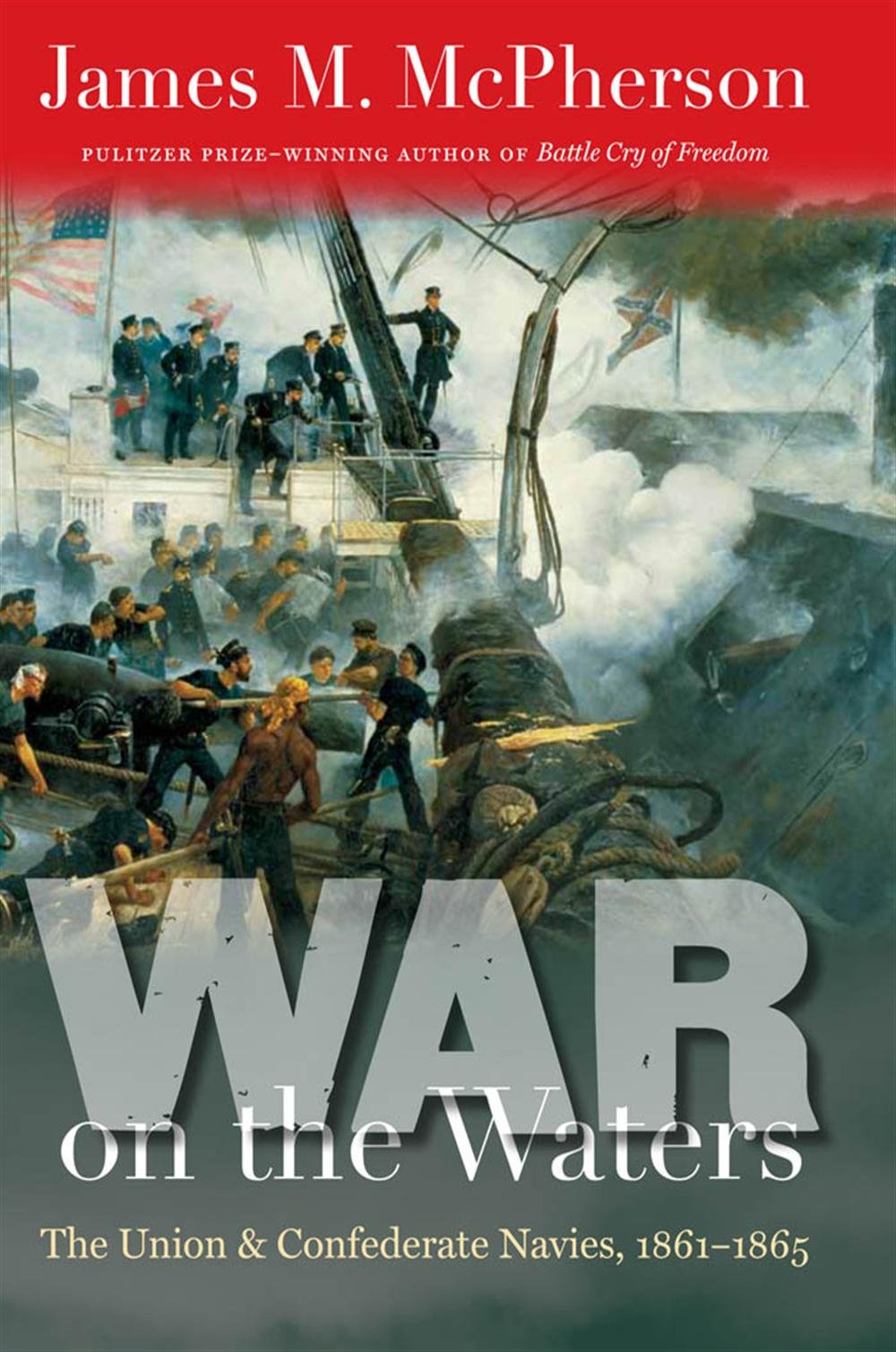 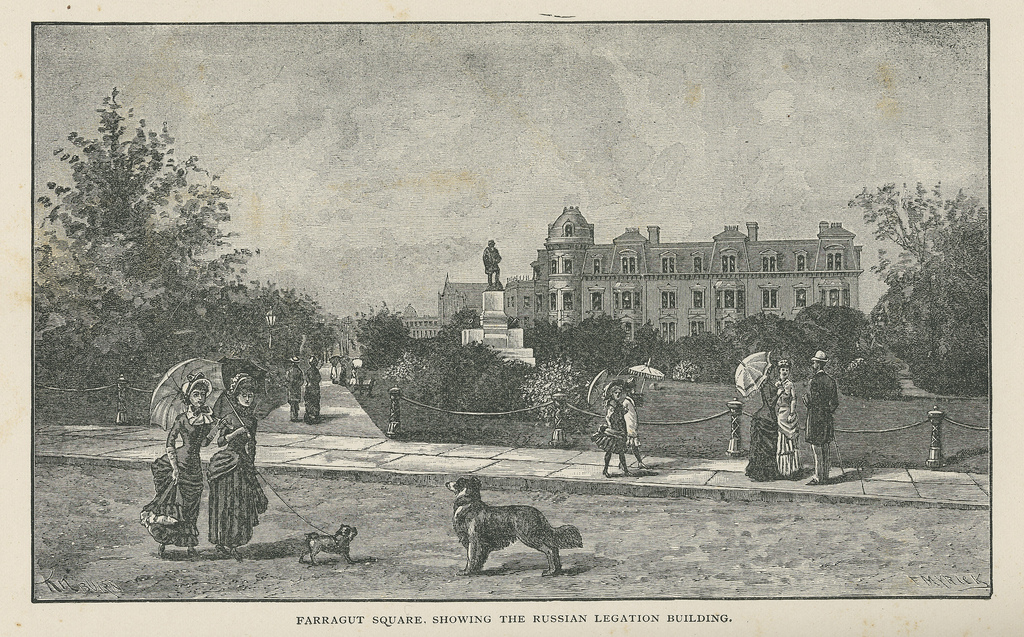 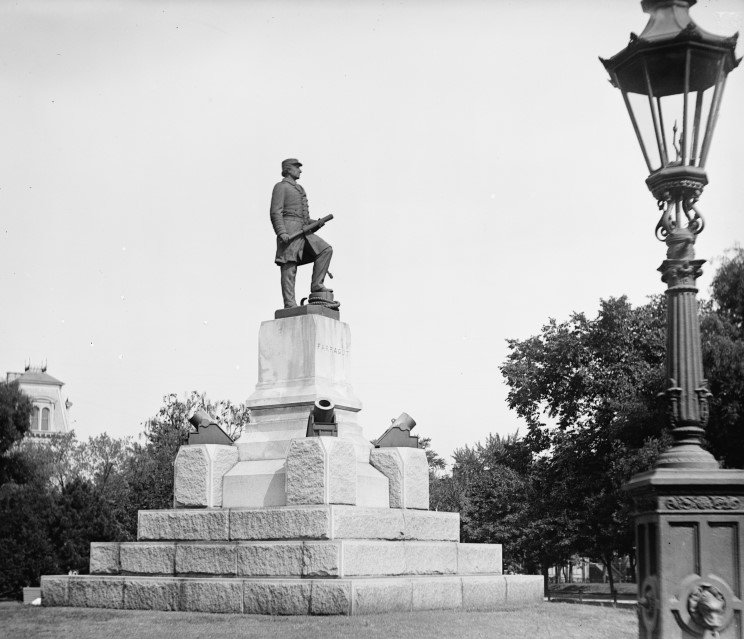 Another view of the square 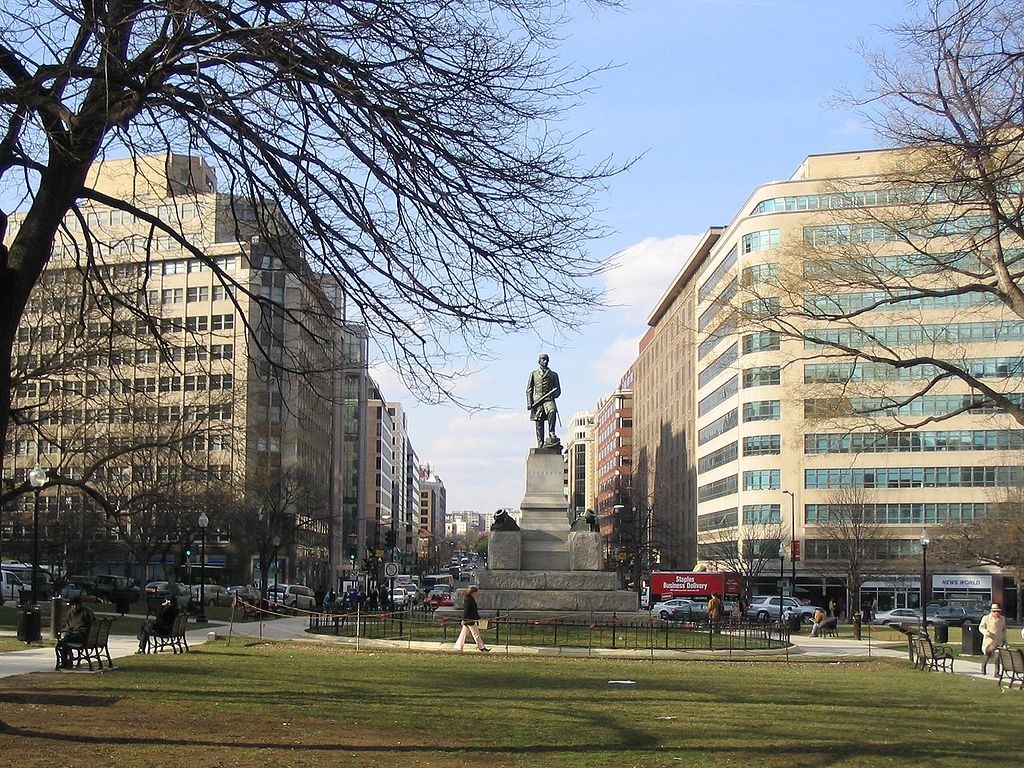 Admiral David G. Farragut is remembered for being the “First Admiral in the Navy”.  He was born in July 5, 1801 in Knoxville, Tennessee to Jorge and Elizabeth Farragut.  Jorge was a Minorcan immigrant during the American Revolution and a merchant captain and cavalry officer in the Tennessee militia. His son was initially named David. But when the Farragut family moved to New Orleans, Jorge gave aid to the father of future Commodore David Porter. When the senior Porter died, the Commodore offered to adopt young James and train him as a naval officer. James changed his name to David, in recognition of this honor.

In 1810, at the age of 9 years, David attended school and received his midshipman’s warrant, then later sailed aboard the USS Essex with his adopted father. During the war of 1812 the USS Essex captured several British whalers.  Midshipman Farragut was given command of one of the prize whalers and sailed in to port before rejoining the Essex crew. In 1814 the Essex was captured by a British ship and Farragut was wounded in battle. For the next 16 years he moved through a variety of posts and was promoted to commander in 1841. With the outbreak of the Mexican-American War in 1846, he was given command of the USS Saratoga, but he did not see any major action during that conflict.  In 1854, as tensions were mounting toward the Civil War, Farragut was sent to California to establish a naval yard at Mare Island near San Francisco. Within four years, he had turned the yard into the US Navy’s premier base on the west coast and was promoted to captain.

On April 19, 1861, President Abraham Lincoln declared a blockade of the Southern coast. To enforce this, in 1862 Farragut was sent to command the West Gulf Blocking Squadron aboard the USS Hartford. Charged with eliminating Confederate commerce, he received orders to operate against the South’s largest city, New Orleans. He gathered his fleet and a flotilla of mortar boats at the mouth of the Mississippi River near Forts Jackson and St. Phillips. After approaching the forts, Farragut ordered the mortar boats, which were commanded by his step brother David D. Porter, to open fire.  After six days of bombardment, Farragut ordered his fleet to move forward. Steaming at full speed, the squadron successfully raced past the forts with guns blazing. With the union ships now in their rear, the forts surrendered. By April 25, Farragut anchored off New Orleans and accepted the city’s surrender.  The Union then occupied the city of New Orleans.  For his capture of New Orleans, Farragut was ultimately promoted to real admiral, the first in U S history.

Farragut moved north up the Mississippi River and captured Baton Rouge and Natchez. In June, he manned the Confederate batteries at Vicksburg, and he linked up with the Western Flotilla. He then steamed back to Vicksburg to support Major General Ulysses S Grant’s efforts to capture the city. With only two ships, Farragut began patrolling the Mississippi between Port Hudson and Vicksburg, preventing war supplies from reaching Confederate forces. Only July 4, 1863, Grant successfully concluded his siege of Vicksburg, Port Hudson fell, and Farragut focused on Mobile, Alabama, one of the largest remaining ports in the Confederacy.  Mobile, Alabama was defended by Forts Morgan and Gains at the mouth of Mobile Bay, as well as by Confederate warships and a large mine field.

Farragut assembled fourteen warships, and four ironclad monitors, and planned his attack. Inside the Bay, a Confederate Admiral had the CSS Tennessee ironclad, and three gunboats. Moving toward the two forts, the Union fleet suffered the first lost when it struck a torpedo (mine) and sink.  Farragut jumped onto the Hartford’s rigging to see over the smoke, and shouted “Damn the torpedoes! Full speed ahead!”   Charging into the battle, he drove away the Confederate gunboats, and battered the CSS Tennessee until the two forts surrendered.  Military operations then commenced against the city of Mobile.

After the war, Congress created the rank of admiral and immediately promoted Farragut to the new grade in 1867. He remained in the Navy until he died of a stroke in 1870.

The Square is Opereated by the National Parks Department and is open the public 24 hours a day.